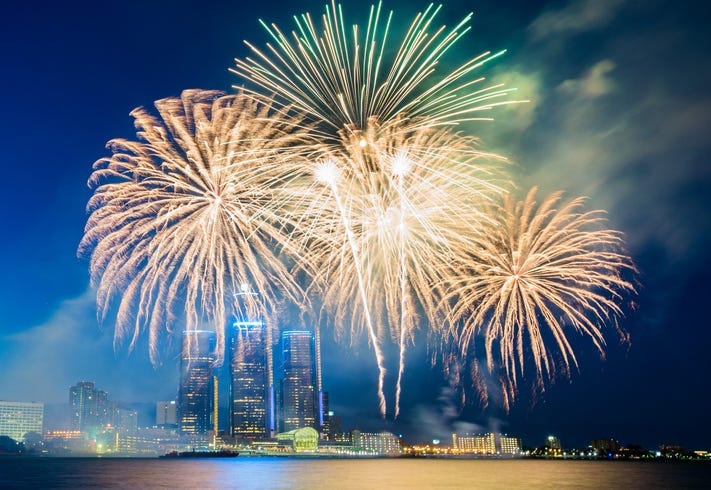 (WWJ) Unless you can somehow track it down, you'll have to catch it on TV.

Organizers of the 2020 Ford Detroit Fireworks — postponed because of the coronavirus —  say this year's display will be shot off from a secret location.

The Parade Company, which organizes the event, says the fireworks will not be held downtown or over the Detroit River and will not be viewable from the downtown area, as has been the tradition.

Instead this year's show will be a pop-up display at a location that will not be announced, "in response to this unprecedented time and with public safety as a top priority."

Detroit Mayor Mike Duggan raised a few eyebrows back in May, at the height of the COVID-19 crisis in Michigan, when he said the fireworks would go on as a TV-only event. While some questioned how officials would prevent crowds from gathering to watch, now we know.

Organizers say the special broadcast on WDIV Local 4 will honor Detroit’s frontline workers and heroes on Monday, August 31 from 8-10 p.m.

The theme of the 62nd annual display is "We Are One Together."

“The Parade Company has an unwavering commitment to this important tradition and bringing great events to our community,” said Tony Michaels, president and CEO of The Parade Company, in a news release. “We are proud to come together with the City of Detroit and our partners to make this event possible each year.”

The fireworks, originally scheduled for June 22, typically draw thousands of spectators to downtown Detroit. The Parade Company selects the musical arrangement and works with Zambelli Fireworks to stage more than 10,000 pyrotechnic effects.