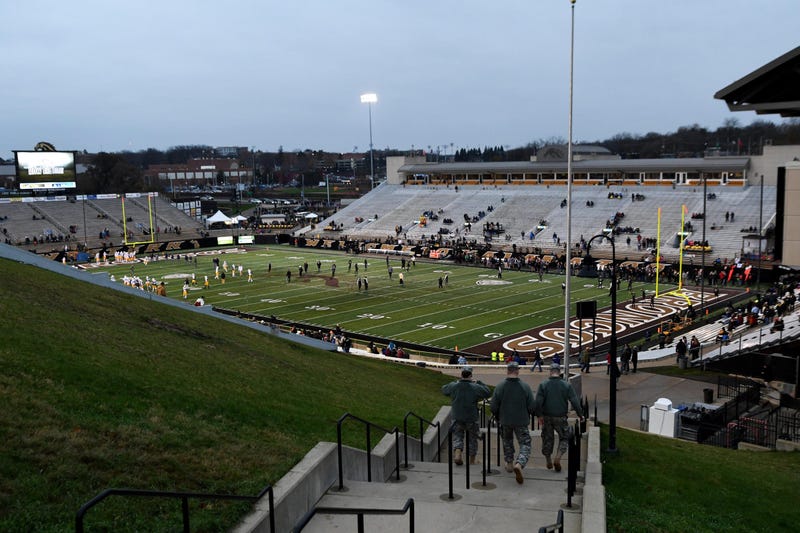 KALAMAZOO, Mich. (WWJ) -- A Commerce Township man says he could take legal action against Western Michigan University after he was injured at Waldo Stadium during Saturday's football season opener.

Michael Nachman, as he has done for the last three seasons, headed over to Kalamazoo on Saturday to watch his son, Josh, perform his first game of his senior year with the WMU marching band. Nachman says he got to the stadium around 5:15 p.m. and picked up his season tickets from will call and watched the band warm up on the practice field.

Around 6 p.m. he started making his way into Waldo so he could get good seats to see the band. Nachman, who uses a mobility scooter to get around, headed up the ramp to his seats, but just before he reached the top, he hit a bump, causing the scooter to rear up and fall back on him.

"I hit a patch area at the top and the wheel went straight up over my head. I ended up slamming my head straight into the pavement behind me and the mobility scooter came down on top of me," Nachman told WWJ.

He says he typically has his wife alongside him to assist with getting up the ramps -- which he has noticed to be bumpy with several patched and repaired spots over the years -- but she stayed behind to watch the band longer.

Nachman says he woke up a few minutes, lying on the ground as several people were trying to lift the scooter off of him. Police and paramedics were on the scene and bandaged his arm and leg. While he says he received minor bruises and light abrasions to his limbs, he did suffer a concussion.

Crews helped him into a sitting position while they examined him and eventually told him they were going to take him to Waldo Stadium's medical facility. At that point, they tried to stand him up, but when they lifted him, he got dizzy and nearly fell down again. Nachman doesn't remember that part happening, due to the concussion.

He was put onto a stretcher and taken to the medical facility, where several CT scans revealed the concussion.

Nachman, who uses the mobility scooter because of a severe liver disease that has required a transplant, says he is exploring the options of filing a complaint under the Americans With Disabilities Act.

"And I hope that maybe, this having happened, they will actually take a look at it and do whatever work is necessary so that no one else gets hurt," Nachman said. "I don’t like to complain. Yeah, I’m hurt pretty good, but I don’t like to dwell on that."

Western Michigan spokesman Tony Proudfoot says the university had crews at the stadium on Tuesday assessing the ramp to see if it was ADA compliant.

"That’s part of what we’re looking into, whether the ramps are ADA compliant and if that might be something that we need to remediate," Proudfoot told WWJ.

Nachman said his son was planning on going to the stadium Tuesday to get pictures and video of the ramp.