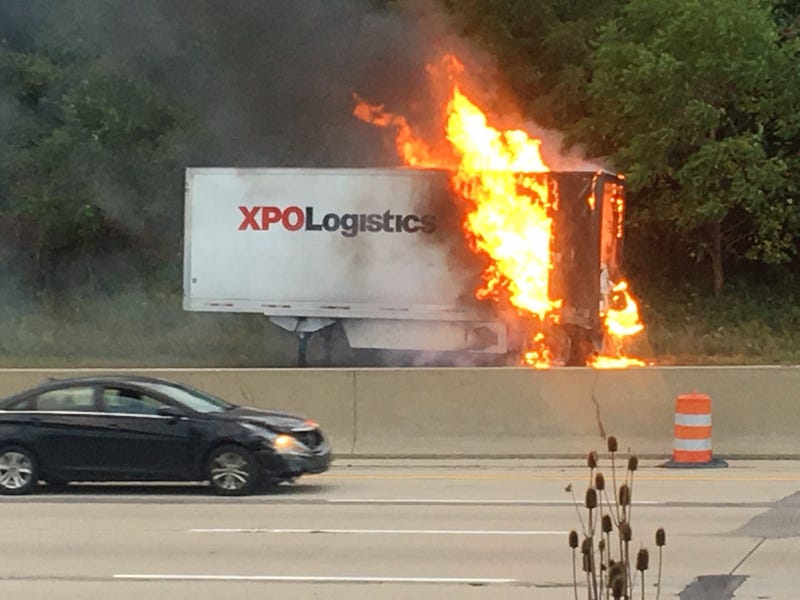 FARMINGTON HILLS (WWJ) - A semi-truck caught fire and went up in flames along I-696 during the thick of the commute Thursday morning, causing a traffic backup that stretched for miles.

The fire took off just before 6:45 a.m. while the trailer was on the shoulder of eastbound I-696 between Drake and Farmington roads in Farmington Hills.

Crews initially had the blaze extinguished, but the flames picked up a second time around 8 a.m. and quickly consumed about half of the trailer.

Farm Hills Fire Dpt returns to rekindled truck trailer fire on I-696 btwn Drake and Farmington Rds. This time they’re pulling out and dousing still-smoldering content. Listen for reports @WWJ950 and https://t.co/NcwIrwPs9B, and read the latest online at https://t.co/9bsne9SkBL. https://t.co/fO2aWJYgPK pic.twitter.com/WFaUF5ZwOX

After the flames were extinguished for good, firefighters started pulling out and dousing still-smoldering content from the trailer.

A cause of the fire wasn't immediately clear. No injuries were reported.

Traffic is backed up for miles, from I-275 to the west and Orchard Lake Road to the east. Drivers are urged to avoid the area.

Front of tandem-trailer semi load on fire: I-696 E btwn Drake and Farmington Rd in Farmington Hills. Back-ups fr I-275 to the west, Orchard Lk Rd to the east. Traffic & Weather Together on the 8s @WWJ950 and https://t.co/NcwIrwPs9B; any time Online at https://t.co/9bsne9SkBL. pic.twitter.com/RlgHYFJxXy

For the latest from the roads, stay with WWJ Newsradio 950 during Traffic and Weather on the 8s, 24-hours a day. >>LISTEN LIVE!