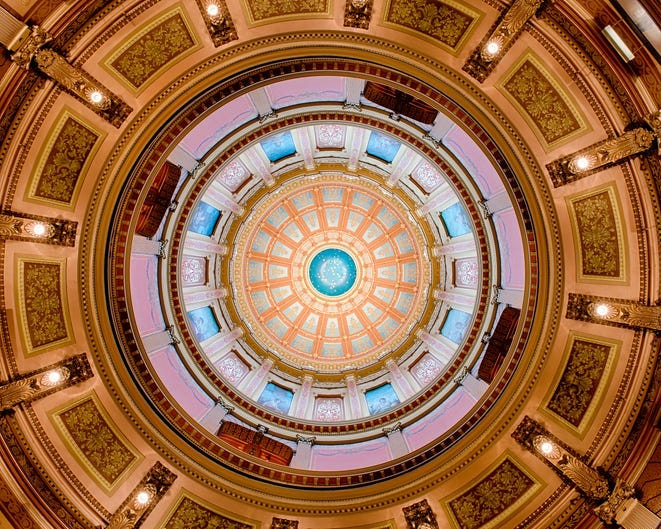 (WWJ) A state legislator from metro Detroit has introduced a resolution calling for a ban on guns in the Michigan State Capitol Building except by law enforcement.

The resolution by Sen. Dayna Polehanki (D-Livonia) comes on the heels of the Michigan Capitol Commission failing to implement a ban during its meeting on Monday; instead voting to form a special committee to study the issue.

The Commission, which manages the Capitol and its grounds, was considering wether guns in the building were a good idea after the state recently made international news for armed protesters by bringing assault rifles into Senate halls and gallery.

“Intimidating legislators, staff, and visitors with guns during session is an affront to the democratic process,” Sen. Polehanki said. “If the Michigan Capitol Commission is going to squander its opportunity to keep this historical building a safe and inviting place for people of all ages, I am more than happy to continue the call for prohibiting firearms from the Capitol.”

On Twitter, Polehanki's called the Commission's delay a "cowardly move."

"My colleagues and I will now be forced by the Commission to speak and vote on behalf of our constituents with heavily armed men looming just feet above us in a balcony that surrounds the senate floor while they 'study the issue,"  Polehanki said," adding. "Shame on the Capitol Commission."

On Monday, Michigan Attorney General Dana Nessel made it clear in her opinion that the Capitol Commission has the authority to restrict guns from the Capitol.

Nessel told WWJ Newsradio 950 last week she believes an immediate ban is needed, and it would be dangerous to put off taking action on the issue.

"This situation is a ticking time bomb," Nessel told WWJ's Jon Hewett. "And if the Capital Commission or the Legislature fails to act, it's not really a matter of it there will be a serious incident, it's when. And when that incident does occur, the Capitol Commission will have blood on their hands."

Polehanki said a ban on guns in the Capitol is constitutional, as it aligns with an opinion delivered by Justice Antonin Scalia in 2008, when the U.S. Supreme Court ruled in District of Columbia v. Heller that the court respected "laws forbidding the carrying of firearms in sensitive places such as schools and government buildings."

Directly above me, men with rifles yelling at us. Some of my colleagues who own bullet proof vests are wearing them. I have never appreciated our Sergeants-at-Arms more than today. #mileg pic.twitter.com/voOZpPYWOs

Polehanki on April 30 tweeted a photo after demonstrators carrying long guns entered the Senate public gallery, shouting at lawmakers on the chamber floor. "Directly above me, men with rifles yelling at us. Some of my colleagues who own bullet proof vests are wearing them," Polehanki wrote.

The protesters were unhappy with Gov. Gretchen Whitmer's stay-home and other executive orders concerning the COVID-19 pandemic, and were urging legislators to vote against an extension of the state of emergency.

The entire situation is something that Whitmer told WWJ's Roberta Jasina and Tom Jordan "just really boggles the mind." In an intervew Tuesday morning, Whitmer said, however, that any ban on weapons is the purview of the Capitol Commission, not hers; and they chose not to act, "ironically because they were getting threats."

Whitmer said she knows many legislators who felt intimidated by the guns in the Capitol, some even felt in fear for their lives.

"When we've got legislators there being the voice tens of thousands of people they represent wearing bullet-proof vests because they're afraid it means that our democracy is undermined and that's precisely why I really think that this action is merited, and I hope the legislature takes it," she said. (Read more from WWJ's interview with the governor here).

Another protest at the Capitol is planned for Thursday.