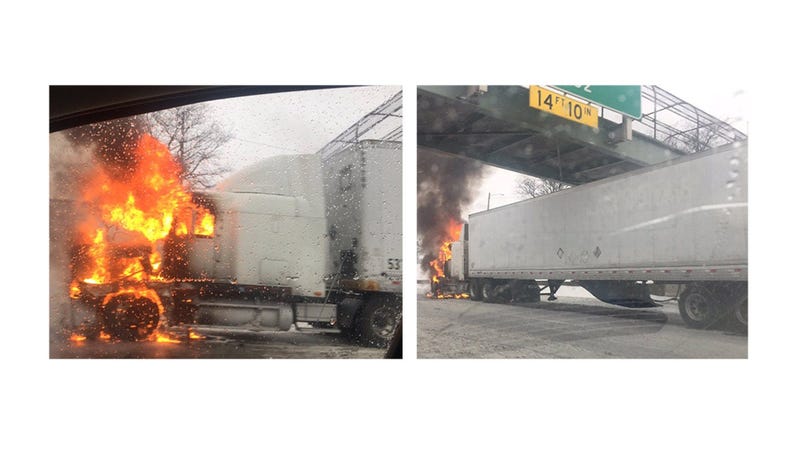 DETROIT (WWJ) -- Amid the treacherous road conditions caused by Monday's snow storm, northbound I-75 in downtown Detroit is experiencing backups due to a semi-truck fire.

Heads up, there’s a truck on fire just north of downtown Detroit on I-75NB. It appears the driver made it out OK. @WWJ950 @WWJTraffic pic.twitter.com/Y3eJQRg6E5

Michigan State Police say around 4 p.m. they received a call that a truck was fully engulfed in flames along the northbound lanes of I-75, just north of I-375 and south of Mack Avenue.

MSP tweeted that the driver, the lone occupant of the truck, escaped the blaze uninjured.

It is unclear what led to the fire.

The ramp from southbound Gratiot Avenue to northbound I-75 is closed, and the truck itself is blocking the right lane and right shoulder.

Authorities say due to the weather, they may have had to close that stretch of I-75, but they ended up getting salt trucks to the scene in time and it remained open.

On 1/28 at approximately 3 55 PM, MSP 911 received a call for a Semi fully engulfed at N I 75/ S of Mack in Detroit. The single occupant is out of the vehicle and uninjured. Due to the weather conditions it may cause a full freeway closure. We will keep you updated. pic.twitter.com/0lZV9avrjc

For the latest from the roads, keep your radio tuned to WWJ Newsradio 950 for live and local updates during traffic and weather, every 10 minutes on the 8s. >>LISTEN LIVE!