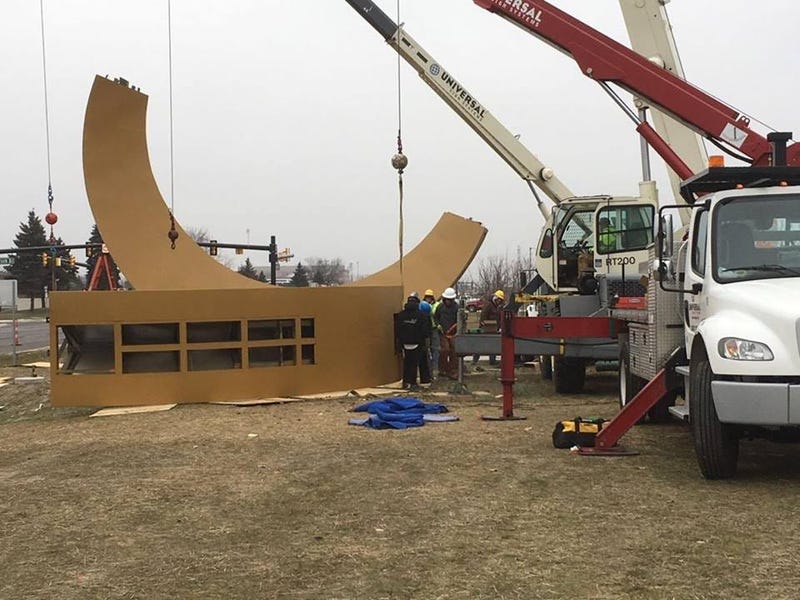 STERLING HEIGHTS (WWJ) - Will that big golden ring be dismantled?

Not really, but the mayor of Sterling Heights got some giggles when he made the announcement as an April Fools' Day prank.

Mayor Michael Taylor joked in an April 1 Facebook post that the polarizing piece of art dubbed "the Halo" will removed -- only to be replaced by an even larger ring.

"At an emergency meeting this morning, the Sterling Heights City Council voted unanimously to remove the Halo icon sign located on Hall Rd (aka the Golden you-know-what)."  he wrote. "Public reaction to the Halo has been fierce and relentless. While the purpose of the sign was to draw attention to the corridor, we were caught off guard and had no idea how much attention it would actually generate! Accordingly, the city will permanently remove the Halo and replace it with a NEW Halo, measuring 500 feet in height and spanning the entire width of Hall Rd., visible from Lake St. Clair to Pontiac."

Reaction to the mayor's post was mixed, as some got the joke and others appeared to take it seriously.

Shelby Fisher commented, "WE DON'T WANT A NEW ONE. WE DON'T WANT ANYTHING THERE. FIX THESE GOD DAMN ROADS"; to which Taylor replied: "That's it. The ring just got 10 feet higher."

Rachel Rossmann knew it was a gag, but wasn't amused. "It’s not even funny as a joke; worst way to spend money for a city!" she wrote. "An absolute WASTE of hundreds of thousands of dollars. Everyone literally hates it."

Speaking to WWJ's Sandra McNeill on Monday, Taylor said everybody's been enjoying joking about the ring, and he wanted to get in on it.

"I have a good sense of humor," he said, "and this didn't get rolled out exactly the way I expected it to with that crass name that the one Facebook page had. But, like I said, hey -- everybody else is going to have fun with it, we might as well have fun, too."

There's been a lot of talk about the 35-foot structure since it appeared in January; part of a landscape project branding the stretch the "Golden Corridor." While some residents have complained about the price (about $180,00 for the ring; $339,350 total with accompanying signs), lighthearted jabs have been the norm, with jokes referencing Sonic the Hedgehog and Stargate; and a "Golden Butthole" nickname that's really seemed to stick.

"We're taking flack and criticism about this ring; and I get that, I completely understand it," Taylor continued. "People are fed up with governments that waste your money, that aren't fixing our roads, that aren't taking climate change seriously, that aren't doing work for the people. They seem to be interested in doing things that make themselves happy, politicians lining their own pockets -- that's not what's happening here in Sterling Heights."

Taylor said the ring is distinctive and unique, and every time it's touched on in the news or on social media, more and more people are exposed to the great things going on in Sterling Heights.

"I'm not ashamed of that at all," he added, "and I'm not gonna apologize for that."

While $180,000 is a lot of money, Taylor said, in the grand scheme of the budget it's a fairly minor expense. "For example, it would get us about 40 feet of Mound Road to be repaved," he added, "and we're repaving Mound Road anyway."