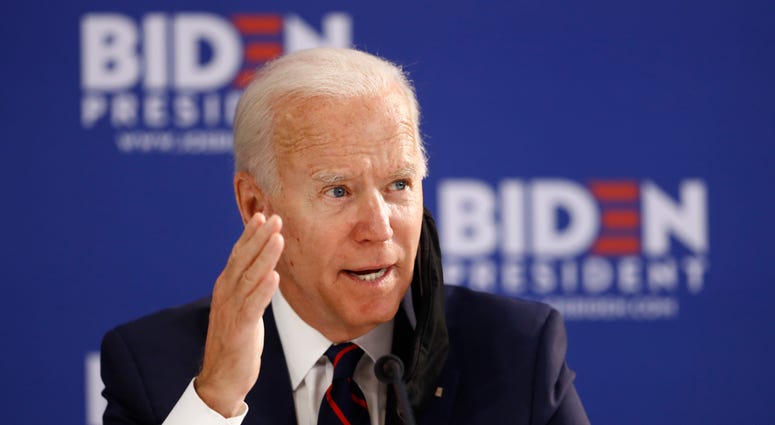 President Donald Trump, 74, made headlines for poking fun at Democratic rival Joe Biden, 77, in front of thousands of cheering supporters for allegedly having work done to his face. He also shamed him for wearing masks during the coronavirus pandemic.

“What the hell did he spend all that money on the plastic surgery if he’s going to cover it up?" Trump said during a campaign rally near Pittsburgh.

Those are fighting words, especially as a lead-off to the debate where the pair will square off for their first time Sept. 29 in Cleveland.

They're also the kinds of words women scream at each other in episodes of Real Housewives.

But in this case the object of the attack is a man, which brings up all kinds of questions about body and age shaming in the modern era among men especially as plastic surgery becomes more common and more open. John Kerry was shamed for Botox, John Edwards for his expensive haircut. The public outcry about Kerry's allegedly facial rejuvenation got so loud that the Boston Herald in 2013 declared, 'It’s time to face up to rumors, John Kerry!

These days, neither candidate has tackled plastic surgery rumors though experts say about one-quarter of all American men get some kind of cosmetic treatment or surgery.

Does that include Biden ... or Trump?

Dr. Gregory Roche in Bloomfield Hills says yes to both.

"I would say yes he did a facelift, possibly even more work around the eyes," Roche said to WWJ's Dr. Deanna Lites about Biden.

He added, though, that Trump in his opinion uses fillers and Botox, common office procedures, especially for millennials and women over 40.

For men, eye lifts to remove the fat pads underneath the eyes is the most common procedure, with liposuction and male breast reduction following on the list of common procedures, Roche said. As more men go under the knife, Dr. Gerald O'Daniel, a plastic surgeon in Louisville, says it's a healthy trend and nothing to be ashamed of.

"Many men wish to rejuvenate their appearance, just like women.," he wrote on a blog. "They want to look as young as they feel on the inside. Men experience the same signs of aging that women do, such as wrinkles, fine lines, and loss of volume. As men age, they are also more prone to experience loose skin and excess fat in the lower areas on their face and neck. This can significantly age the face and create an undefined jawline."

The reason many men go under the knife is simple: A youthful appearance is good for their career.

Dr. O'Daniel added that it's time for the shame to go away. "Some men are afraid to have plastic surgery because they are afraid of the stigma associated with the procedures. For many years cosmetic treatments have been targeted at women, but over the past ten years, more and more men are having procedures done as well. From surgeries, to monthly treatments, men want to feel good about their appearance too. It is now seen as a part of your overall health. As normal as dieting and exercising to most men."

As for Trump and Biden, the president went on to say, "“It makes Joe feel good. Whatever makes you feel good.” Then he wondered aloud about the bill