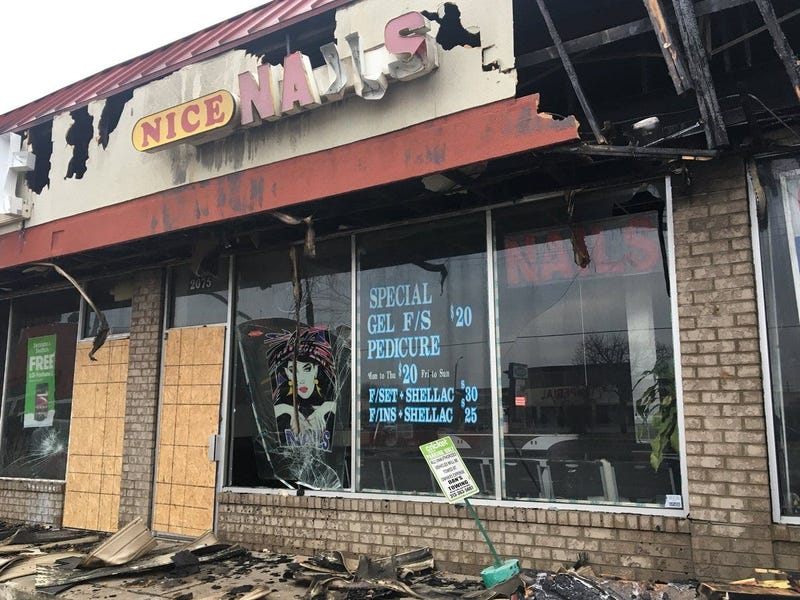 WARREN (WWJ) - A WWJ reporter who was working the scene of a fire in Warren helped catch a suspected crook trying to "cash in" on the situation.

The incident happened at the Mohawk Plaza along 8 Mile Road just east of Dequindre Road.

A fire spread through the shopping center on Wednesday night and caused damage to a majority of the businesses.

While WWJ's Mike Campbell was reporting from the scene Thursday morning, he noticed a man dressed in black with a backpack looking into the burned-out Nice Nails nail salon.

"He was standing out front, kind of scouting the area," Campbell said.

Fire, B&E at strip mall in Warren - 8 Mile, E/O Dequindre. At least 6 of 11 businesses destroyed. Man smashes window at Nice Nails, rummages inside, climbs back out; Warren Police tackle him, reportedly find money in his sock: “Most people don’t carry their cash there.” @WWJ950 pic.twitter.com/VkMS2cjK9Q

The man then grabbed a customer parking sign, smashed the front window of the nail salon and climbed inside as Campbell called police.

"I pulled up to the front of the store with headlights on and he just sat there and ravaged the inside of the store, just tore it apart," Campbell said. "Even though I was sitting right here and he saw me -- in a marked news truck -- he rummaged around in the store and then eventually came out while I was on the phone with the Warren Police dispatch."

The suspect exited the store before officers arrived on the scene, so Campbell continued to follow the man. When officers showed up, they found the suspect on the Detroit side of 8 Mile Road. He was taken into custody after being tackled by officers, Campbell said.

It's unclear if the suspect took anything from the nail salon, but police say he had money stashed in his sock. Charges are now pending.