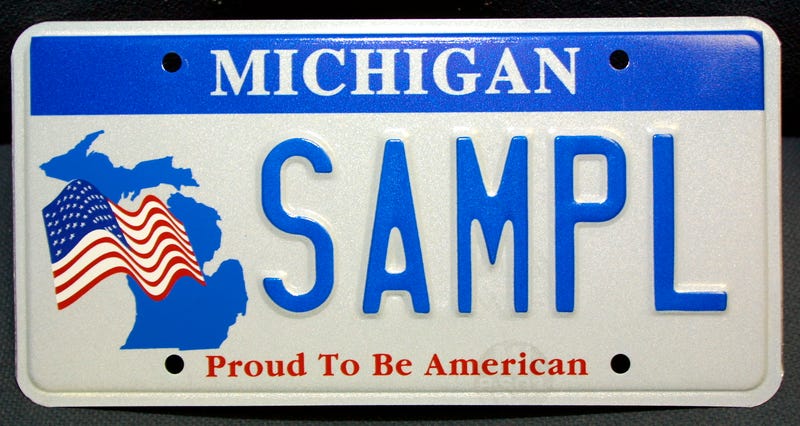 (WWJ) - While certainly clever, custom license plates bearing the words "10LFART," 5LOWAF," "BND0VER" and more did not get the stamp of approval from the Michigan Department of State, instead they ended up on quite a different list.

The master file, released by the Secretary of State and reported by Mlive, includes over 21,000 personalized plates that were rejected over the years for being too graphic, hateful and vulgar for Michigan roads.

Officials told Mlive they couldn't categorize when the plates were denied, but provided the full list of every plate that earned the distinction of being banned by the department. Ever.

Most of the plates on the list vary when it comes to violating state law. Some plates reference drugs, alcohol, slurs or criminal activity, while others display curse words or bodily functions.

The department told Mlive that roughly 25 employees split into three teams are dedicated to the review process when it comes to personalized plates. Each team is consisted of diverse members to better identify and interpret slang phrases and words that may otherwise go unnoticed by others, officials added.

Inappropriate plates tagged by employees are forwarded to a committe with reasons why they violate state law. The committee then votes on whether the plates are approved or not.

If a flagged plate earns the majority of votes for approval, it gets the green light.

If not, the plate gets added to the ever-growing banned list.

According to state law, custom plates are rejected if they:

• Are profane, obscene, sexually explicit or graphic, excretory-related or depicting a swear word

• Describe drugs or alcohol, including their use or culture (ex. ‘M00NSHN’)

• Disparage, promote or condone hate or violence against a business, group or person (ex. ‘H8C0PS’)

While upper management can override a plate vote, the department said it's rare.

Benander said current event and COVID-related plates have also been rejected, such as ‘FUC0V1D."

Roughly 600 plates were rejected after the department figured out customers tried to make an inappropriate word combination using an organization's logo on a custom plate.

For example, one plate on the banned list spelled out "E1NER", which sounds innocent, until officials noticed it was combined with a Western Michigan University plate where the 'W" logo came at the beginning.

Other people tried to get away with ‘UMBA55,’ ‘0GP00P’ and ‘RUNK’ while using the Old English D on a Detroit Tigers plate -- they were ultimately denied.

To see the craziest vanity plates the Michigan Department of State has rejected over the years, click here.