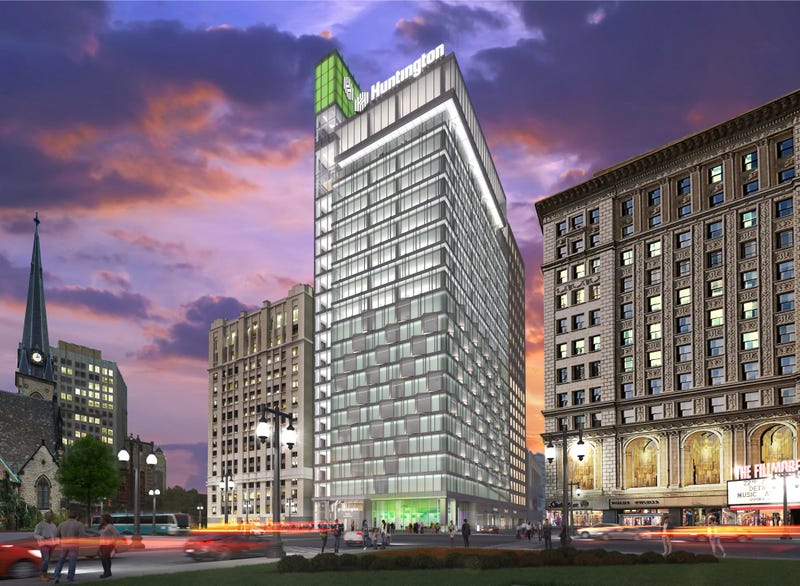 (WWJ) WWJ is getting an exclusive first look at renderings of the future high-rise headquarters for Huntington Commercial Bank in downtown Detroit.

It’s a @WWJ950 EXCLUSIVE! @TCFBank out with a new rending today of the headquarters of what will be @Huntington_Bank’s new home as the merger of two nears completion. I’m live & local on @WWJ950 at 8:30.
Listen live https://t.co/PVrQSP2N15 pic.twitter.com/pNUOou63HQ

The announcement of the new headquarters, to be located on Woodward and Elizabeth, was made when it was still Chemical Bank.

By the time of the groundbreaking in 2019, the name had changed to TCF Bank.

Now, a third name change is in the works. The renderings are pending a merger with Huntington Bank, expected to close in June.

“The merger with Huntington just creates more excitement for the building. This really enhances the opportunity for us to continue to move forward with brand recognition that the building will give us, the visibility on the Detroit skyline and it will symbolize the commitment to the city that Huntington has.”

The building will be 20 stories high and employ 800 people, according TCF Bank. Before plans of the merger, only about 300 people were expected to work there.

It will display Huntington’s name in lime green letters at its top.

The construction is on schedule, Shafer said.

“It is going to be a fantastic building,” he told Thomas. “The roof will have common space. There is going to be an entertainment venue up there. On the 19th floor there’s a veranda that goes around the building, with big glass doors that open up so we can have corporate, as well as community gatherings up there.”

The building is slated to open in spring 2022.