(WWJ) -- Hot dogs are a quintessential part of an American summer -- there's no debating that.

Something we don’t always agree on, however, is an age-old question:

Is a hot dog a sandwich?

Ok, perhaps it’s not an “age-old question,” but it has definitely become an internet meme for the digital ages, sparking debate and creating divides. Just check the comments section anytime you see a post about the question.

As Wednesday is National Hot Dog Day, the folks at Smoked Meat Sunday, a grilling and barbecue site, wanted to get a definitive answer -- as if a declaration from the National Hot Dog and Sausage Council wasn’t enough -- so they decided to put technology to work.

Using geotagged Twitter data since Memorial Day -- the unofficial start of grilling season -- they created a map to show how each state feels. Data from more than 75,000 tweets was used.

Michigan’s verdict? A hot dog is not a sandwich. 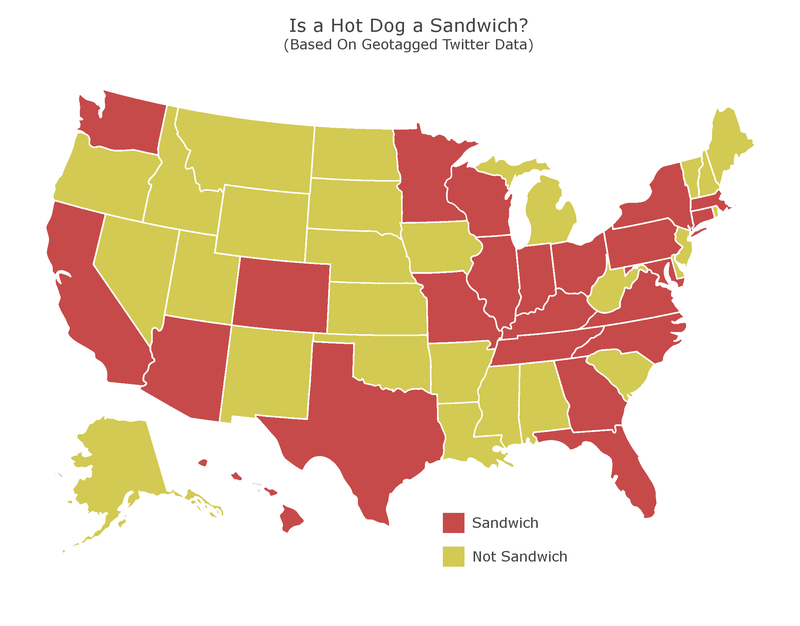 Michiganders are apparently in the minority of Midwest states, as Indiana, Illinois, Ohio, Wisconsin and a handful of others say it is a sandwich.

But on a broader scope, Michigan was in the national majority, as 27 states -- most of which come from the west and south -- say a hot dog is not a sandwich.

In the end, it really doesn't look like we're any closer to agreeing on an answer to this agonizing question.

So what do you say? Is a hot dog a sandwich?