DETROIT (WWJ) -- James Craig was forced to leave an event where he had planned to formally announce his candidacy for governor of Michigan after being rushed by protestors.

The former Detroit Police Chief was holding a press conference this morning on Belle Isle when he was shouted down by members of the organization, Detroit Will Breathe.

NEW... former Detroit Police Chief James Craig is shouted down by Detroit Will Breathe protestors on Belle Isle. Craig had planned a news conference to, speculation is, formally announce his candidacy for Governor of Michigan. WARNING some language NSFW Updates @WWJ950 pic.twitter.com/h8ujSMQxUq

As Craig attempted to yell over the crowd, he was mostly drowned out by protestors loudly chanting, "James Craig has got to go."

“I just have one thing to say: I'm running for governor of the State of Michigan," he said before being escorted away by staff.

Still, that wasn't the end of the situation.

In a video captured by WWJ's Jon Hewett, protestors can be seen following the ex-cop all the way to his SUV, as they continue to chant and blow airhorns.

Craig, who is running for Michigan's top office as a Republican, spoke with WWJ's Charlie Langton ahead of Tuesday's event, and stated that he deeply disagrees with public officials who do not put their support behind law enforcement.

“If you are governor, if you’re a mayor, your core responsibility is public safety,” Craig said. “When you talk about some of the reckless comments that have been made by those who sit on the left -- the far left…’Defund the Police’ -- I think it’s the governor’s role to denounce it.” 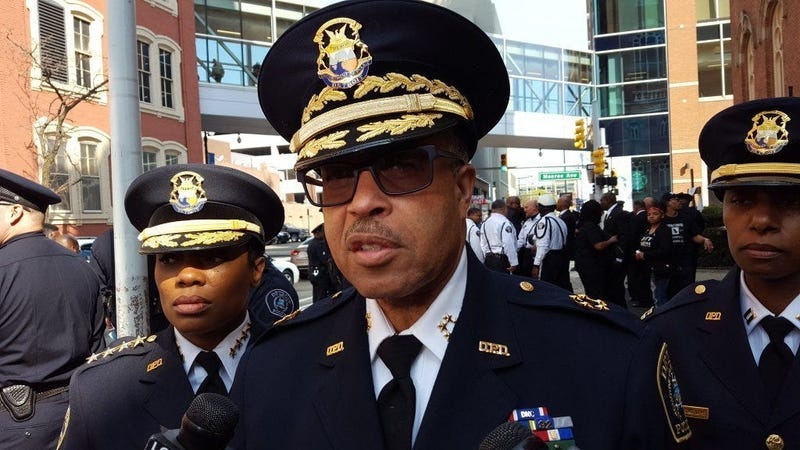