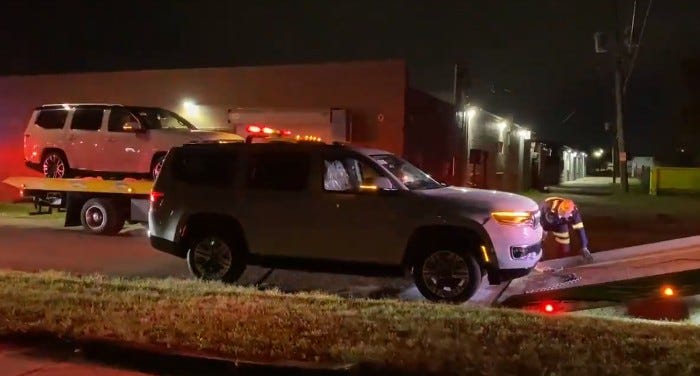 WARREN (WWJ) - There is a heavy police presence at Chrysler Warren Truck Assembly in Macomb County after thieves busted through the gate and attempted to make off with at least two SUVs Tuesday morning.

WWJ's Charlie Langton reported live from the scene on 8 Mile and Mound where he said thieves smashed through a gate to get onto one of the lots.

He said the thieves appeared to be targeting Jeep Wagoneers.

"We heard about 5 o' clock this morning, Warren police got a call, apparently it looks like a number of cars that were stolen." Langton said from the plant.

At least two of the SUVs were stolen, Langton said, but there could be more.

Police were alerted to the suspicious activity quickly and recovered at least two of the vehicles, which were towed away, Langton added.

In addition to the break in at the Warren plant, Langton said reports were starting to coming in about another alleged auto heist downriver.

#BREAKING A number of Jeep Wagoneers have been stolen after a break-in at the Chrysler Warren Truck Assembly Plant on Mound and 8 mile. @cityofwarren @WWJ950 @FOX2News @Jeep #Tuesday pic.twitter.com/8h7fPJUubP

"At least 10 to 12 Ford Mustangs were taken from the Flat Rock Assembly Plant and they were heading northbound on I-75 that was about 1:30 this morning," Langton said.

It is unclear if the two incidents are related.

They are the latest alleged cases in a string of auto thefts that have plagued auto plants over the summer.

Back in July, multiple Ford Raptor trucks had been stolen from a lot in Dearborn.

In June, over $1 million worth of brand new Ford pickup trucks were recovered in various states of disrepair after being heisted from the same plant in Dearborn.