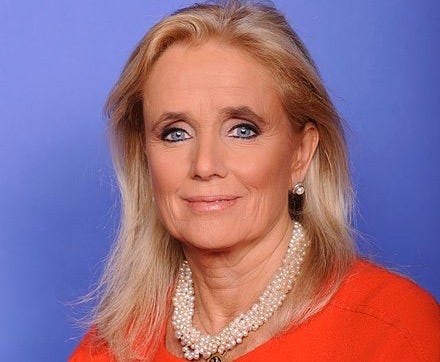 "My belly was on fire. I might have had a little stomachache during the week, but it was a busy week with the president in Dearborn and a lot of other issues. But it wasn't until Friday morning that I was on fire," she said. "But I'm okay. I may have to give up Diet Coke and junk food."

She said she was on her way back to Dearborn when she started feeling the pain.

"I just knew I couldn't get on the plane. I called my doctor who sent me straight to the Emergency Room. They took one look at me and they knew I had a perforated ulcer," she said. "I was in surgery within three hours."

She blames the Motrin she took for an infection in her jaw.

"I'm not someone who drinks, I stay so far away from NSAIDs and pain pills. I never ever take them. But because I had an infection in the bone of my jaw, I had taken a lot of Motrin. Doctors warned me NSAIDs could cause this. I had no symptoms until Friday morning."

She expects to spend the next five to seven days in the hospital.

According to Very Well Health, a perforated ulcer is when an "untreated ulcer burns through the wall of the stomach, allowing digestive juices and food to seep into the abdominal cavity." In some cases, it can lead to sepsis, an often fatal condition when an infection spreads throughout the body via the blood stream.

Rep. Dingell was elected to congress in 2015 to fill the seat of her now late husband, Rep. John Dingell. Rep. John Dingell (D-Dearborn) served for nearly 60 years, the longest serving member of Congress to date. He passed away in February of 2019 at 92.

"I'm great. The doctors and nurses are great. I'm doing okay. My friends, I've heard from a lot of people back in Michigans. I'm so grateful to have the friends I do. It really means a lot," she said. "And I'm lucky."