(WWJ) -- The chances of spotting a cougar in Michigan are seemingly increasing.

Cougar sightings are on the rise in the Upper Peninsula, hitting the double digits for the first time since 2019.

According to the DNR’s website, the most recent "Big Kitty" was captured on a trail camera, timestamped at 6:12 p.m. on Sept. 16 in Dickinson County.

The sighting marks the the 74th in Michigan since 2008, officials said. All of the confirmed 2021 reports have been in the U.P., including three in Dickinson County, two in Marquette County, and one each in Baraga, Delta, Houghton, Luce and Schoolcraft Counties.

Reports of cougar sightings may be spiking due the increased popularity of trail cameras, which are used by hunters and wildlife enthusiasts.

Cougars were originally native to Michigan, but were wiped out from the state around the early 1900s, according to the DNR’s website. The last known wild cougar legally taken in the state occurred in 1906 near Newberry.

For more information on cougars in Michigan, including a list of the confirmed reports and forms for reporting additional cougar evidence, visit Michigan.gov/Cougars. 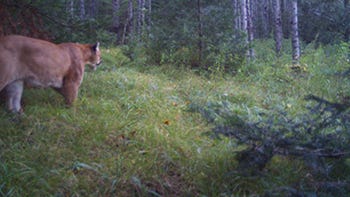