(WWJ) -- A hands-free road trip, what could possibly go wrong?

Very little, as it turned out. But, I did learn a lot about the true meaning of "driver assist" during a Labor Day Weekend Detroit-Pittsburgh round-trip journey, where the goal was to have my hands on the wheel as sparingly as possible.

Instead, Super Cruise adds steering to the operations you would typically see with modern adaptive cruise control.

You are the driver. You get the tickets. You're responsible for any crashes.

Super Cruise monitors your eyes to make sure they are on the road. No texting; no reading; no dozing. If the system gets any hint you are not paying attention, it will warn you and make you take control.

I know, because it became so angry with me that it yelled at me, forced me to take over steering, and locked me out.

It was just a misunderstanding -- honest! But more on that later. 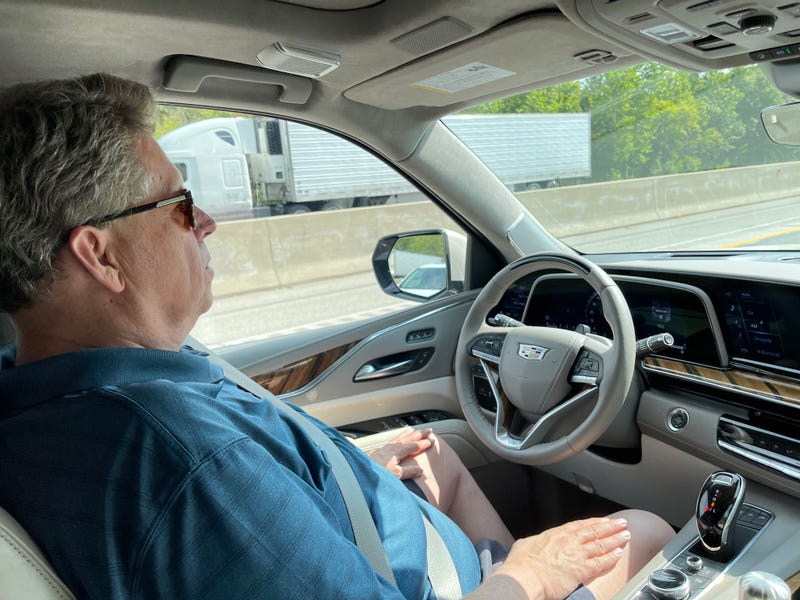 I've spent a lot of time with Super Cruise on GM's Test Track, Detroit-area highways, and even a quick trip to Cleveland a few years ago. But I wanted to try it on a real road trip. So GM let me try out a Cadillac Escalade with Super Cruise for a holiday weekend trip to my hometown of Pittsburgh.

Lots of roads -- wide and flat; skinny and narrow -- and loads of construction.

The system will only operate on limited access highways.   Again, safety always comes first.  You are the driver, and can steer, brake, accelerate and override anything the vehicle is doing.

So, what do you do when the vehicle is handling all those tasks? I found myself constantly scanning the road ahead of me -- even more than I might otherwise. I was looking ahead for anything that may require me to take control.

You no longer have to change lanes yourself. You put on the turn signal, and the vehicle looks for an opening and moves in. It's a slow, deliberate process, which works fine on the open road, and great in heavy traffic where it's sometimes hard to find an opening.

However, it's not so good when you want to get into the left lane and there's somebody coming up quickly behind you. I had to take over and put on the gas a couple of times.

There were a few times that happened, including when a bag of garbage suddenly appeared in the road. I feel as though I saw it, and easily avoided it, earlier than I might have otherwise. 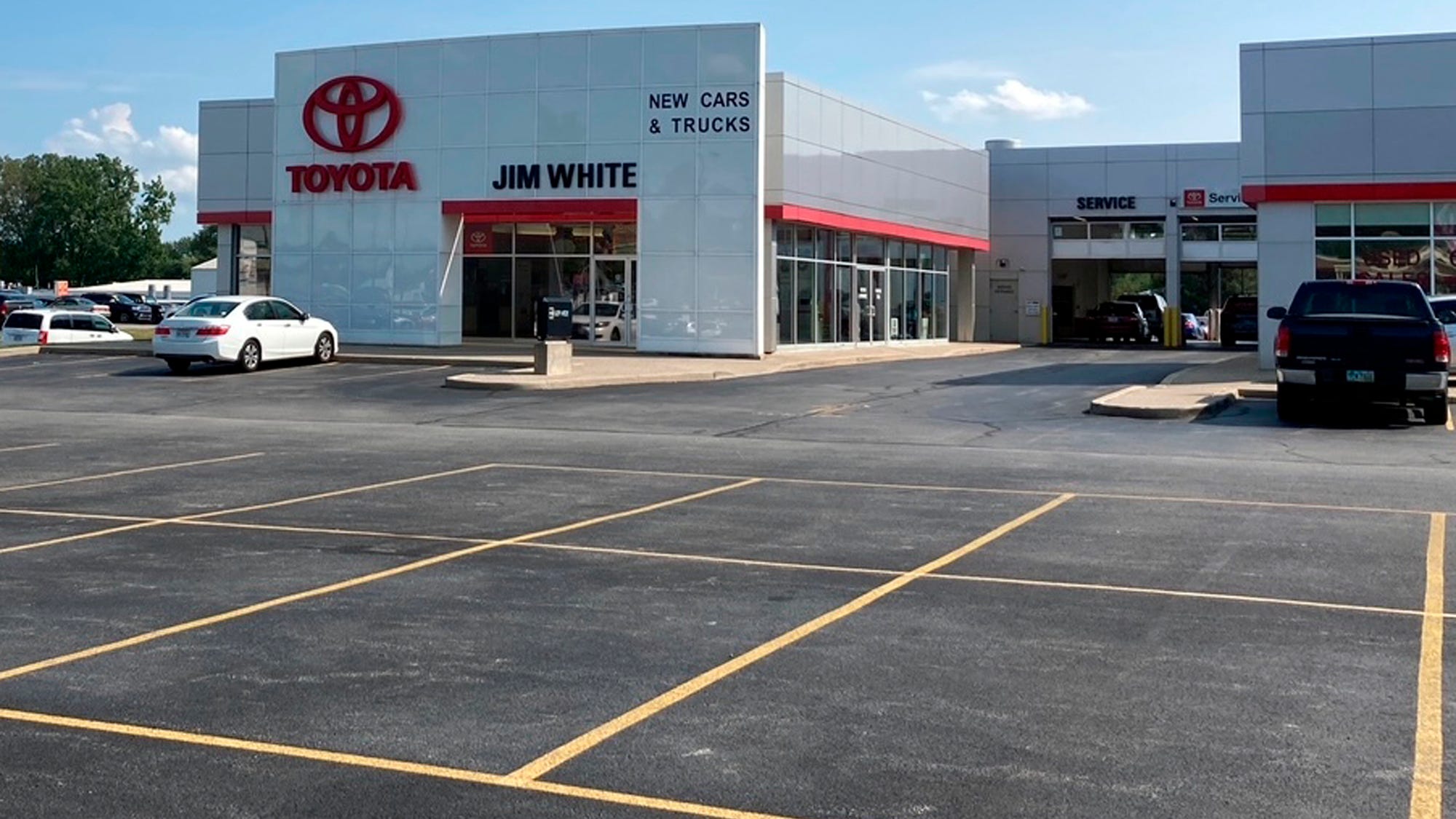 There was also one time when the vehicle seemed to speed up too quickly, and my plan to slowly pass one truck ended up with me feeling like I'm barreling at warp speed -- center lane -- semi on my left, semi on my right. Not a comfortable feeling.

For the most part, it's actually a stress-reducer. You get used to the process, and get into a rhythm.

The next generation will do this automatically when you approach a slower vehicle. It felt good on a test track, and I'm eager to try it out in the real world.

It's another reminder that you are in control, and you find yourself slowly adapting your driving habits to accommodate.

There are stretches of highway where you still have to drive, though I couldn't figure out why. It was maybe 10 miles here and 5 miles there. Again, you need to pay attention, because the system hands back control of the vehicle quickly.

Which brings us back to the moment I made the system mad at me.

I was approaching the Toledo exit on the Ohio Turnpike, and started to disengage the system because I was about to leave. I'm not sure if it's because I both tapped the brake and turned the button off (maybe it thought I was trying to turn it back on quickly) but a loud voice told me to pay attention...loud enough to wake anybody who may have dozed off!

After that, I was in "Super Cruise Jail"; locked out of the system until my next trip.

Overall, open road driving in flat Ohio was pretty relaxing and stress free.   Then we entered the hills of Pennsylvania.

The system worked great, but the more curves you wind around, the more nervous you feel. The same sensation happens when the median is narrow or there are barriers close to the road. Sometimes, you may get a little squeamish when you pass an 18 wheeler.

Still, the system handled great, but here's where I think the real value is --urban commuting.

It doesn't take much to jam up traffic on Pittsburgh's Parkway East, and rush hour started early on the Friday before Labor Day. 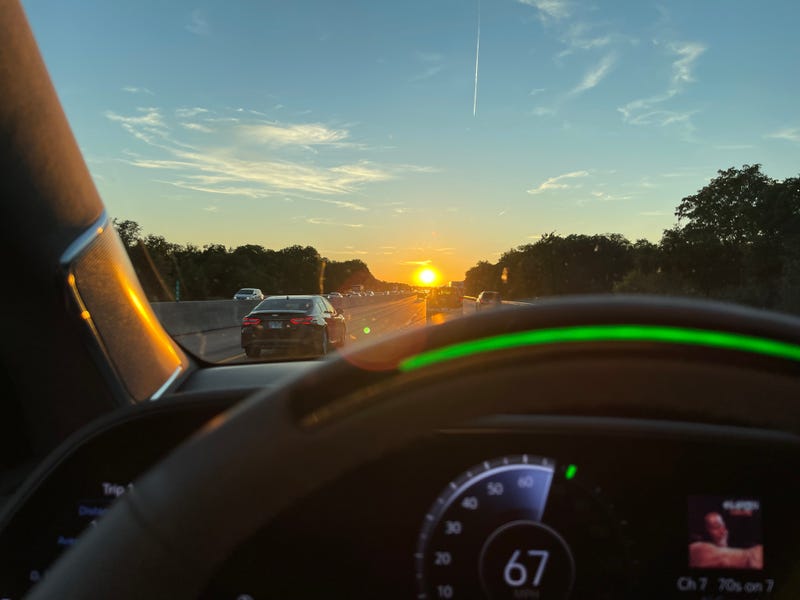 I became more experienced with this while in a backup on I-96 in the Detroit area. The situation cemented my belief that this is the where systems like this are the most valuable. But you have to maintain focus, because it can hand control back to you quickly.

My mind wandered back to many stressful rush hours. If this was still my regular routine, a system like Super Criuse would be a great relief.

There were also a couple of times it added stress.

Twice, while on the open road, the vehicle slowed down rapidly, as if there was an invisible car in front of us.  Somehow, the sensors must have picked up a mirage of sorts.

Construction zones were another treat. I only let the system run to test it, and it worked fine. But I often just kept my hands on the wheel, out of an abundance of caution. In a normal situation, I would have just shut it off.

One construction zone on the Ohio Turnpike heading right into the sunset was particularly stressful. Earlier versions of Super Cruise had trouble when they were facing the sun. This one worked great, but it was a bit nervous.

There are a lot of people who are apprehensive about systems like this, and there's a lot of misunderstanding, as evidenced by more than 100 comments when I put information about my trip on Facebook.

A sample of some comments, and my response:

COMMENT: Don't take a nap
RESPONSE: It won't let you. It watches your eyes

COMMENT: How weid does that feel?
RESPONSE: Takes a little getting used to. Makes the driving easier, though.

COMMENT: Be calm and stay away from Elementary School loading zones.
RESPONSE: It only activates on freeways. So I should be good.

COMMENT: I applaud your bravery, and pray for your safe arrival
RESPONSE: I always appreciate prayers. But, the bottom line is I'm still driving.

COMMENT: It used to be hands at 10 and 2. Now it's hands at thigh and thigh. Scary.
RESPONSE: At least they are my thighs.

Overall, I enjoyed the trip and the system worked well, but it was far from perfect. I was also out of "hands-free" mode more than I expected to be. Generally, a positive way to take a road trip.

My wife summed it up with a simple question: "Would you buy a car with Super Cruise."

The answer, unfortunately, is not so simple.

If I lived in LA and had a daily freeway commute, absolutely.

If I took a lot of road trips, probably.

But if I worked from home and did the occasional road trip, the answer gets fuzzy.

On an Escalade, where the cost gets lost in the six-figure price tag, why not? As it expands to mass market vehicles, a couple thousand dollars is a tougher sell.

GM tells me customers really like this system, but it's only on high-end vehicles. I can't wait to see how this plays out as Super Cruise -- and similar systems from competitors -- become more widespread. 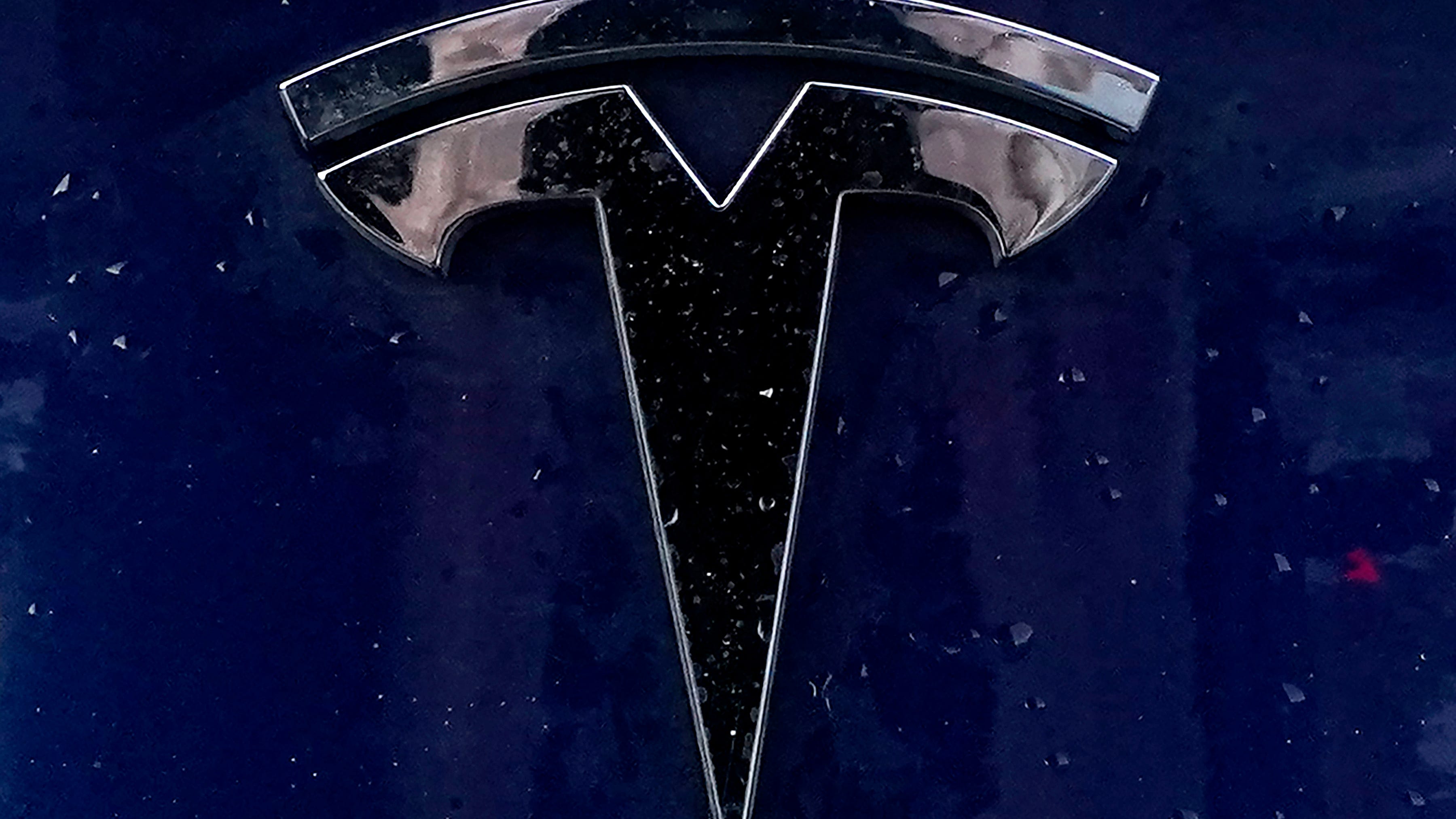 US asks Tesla how Autopilot responds to emergency vehicles