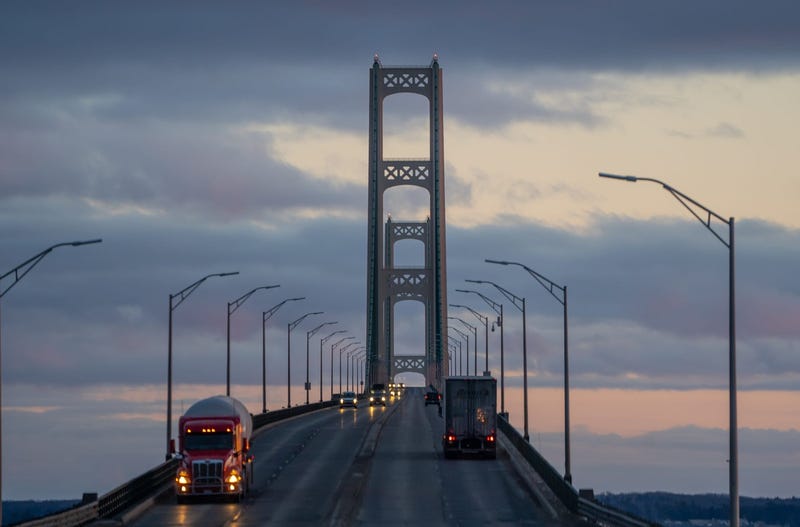 GRAND RAPIDS (WWJ) - A 38-year-old man is behind bars for human trafficking after the Mackinac Bridge Authority discovered a teen hiding under a blanket in the back seat of his car at the bridge this month, deputies said.

Investigators with the Kent County Sheriff’s Office Human Trafficking Task Force said the case into the alleged human trafficking began when they received a tip in October about a 16-year-old Grand Rapids girl who could be a victim. Further investigation revealed the young girl had befriended a 38-year-old Comstock Park man in a "public" area.

Deputies said the teen was then trafficked through online posts.

According to deputies, they informed authorities in northern Michigan of the case after they received information that the teen was in the Upper Penninsula, possibly with the 38-year-old.

Police said the man was crossing the Mackinac Bridge on Nov. 12 when a toll worker spotted someone hiding under a blanket in the backseat of his car and notified police.

Officers pulled the 38-year-old over after he crossed the bridge and the trafficked teen was discovered, deputies said.

The man was taken into custody and now faces charges of of sexually abusive activity, human trafficking, possession of child abusive material and using a computer to commit a crime.

As reported by WOODTV, the case marks the first charges brought forth since the Kent County Sheriff’s Office Human Trafficking Task Force was formed earlier in 2022.

“I think you’re going to see more (charges),” Kent County Sheriff Michelle LaJoye-Young told WOODTV. “We definitely have learned enough to know there is a need for this kind of investigation and this kind of expertise here in Kent County, it’s easy to think it’s not going to be our community, but it is our community, it is our neighbor, our neighborhoods, and it’s stuff that we’re going to continue to need to pay attention to.”

As in this case, LaJoye-Young said tips from public give police their best leads.

“(This is) a pretty good example to use. To that toll operator, something didn’t look right. They had been alerted that we were looking for this person, but she didn’t see the victim. Instead, she saw something that didn’t look right in that car and she reported it,” LaJoye-Young said.

While cases can differ, the sheriff said it is important for those who notice anything strange to report it immediately to 911.

“Somebody that looks like there’s a strained relationship, there might be a controlling relationship there. Maybe they won’t let them get out of the car, maybe they’re improperly dressed for the weather, maybe they don’t have access to their own credentials, or a cell phone and they are being managed. That would be something I would really have you pay attention to,” she said.

LaJoye-Young also cautioned parents to discuss with their children about what kind of information they share and who their share it with, especially strangers. She added that human trafficking cases are more likely to happen when a stranger is able to have prolonged contact with a young person, usually at a mall, grocery store, park or even a school activity or function.

“Being friendly is one thing, but disclosing information about yourself, developing a relationship with somebody, beyond a quick ‘Hi, how are you?’ can be very dangerous if they’re trying to manipulate you or gain access to you,” she said. “So having that talk with young people ahead of time; you don’t need to make a friend with the person on the park bench or at the mall who might be trying to connect with you. Those aren’t healthy relationships and it’s not being friendly, it’s being inappropriate.”