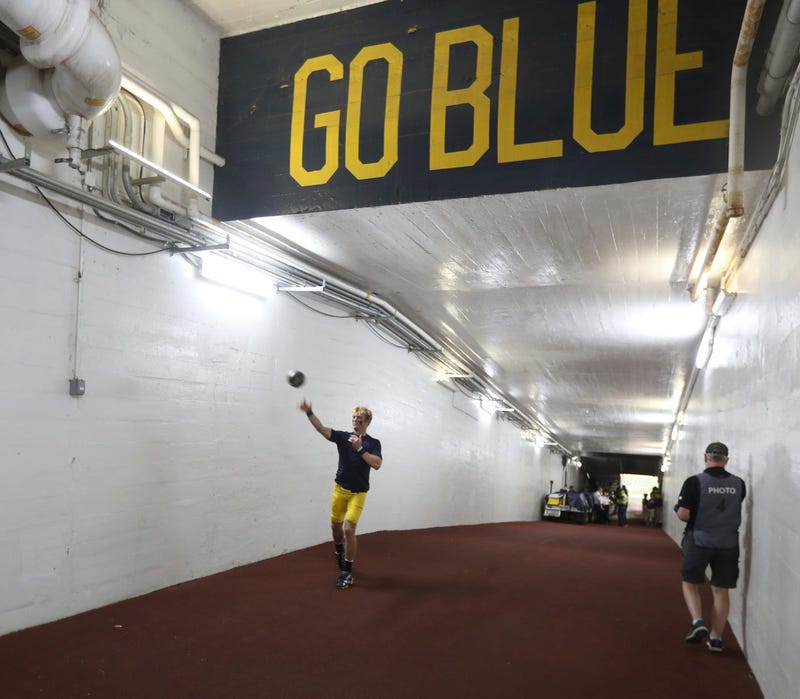 ANN ARBOR (WWJ) - The University of Michigan announced it will increase space entering and exiting the tunnel at Michigan Stadium by removing a small section of stadium seats, the athletic department said to news outlets on Monday.

The planned expansion is due to happen ahead of the 2023 season after an incident at a rivalry game between the Wolverines and the Michigan State Spartans back on Oct. 29.

In a letter from the university first reported by Mlive, the athletic department said the safety review and subsequent decision was not dictated by the infamous altercation between players from both teams in the tunnel, but rather an incident involving someone in the stands.

The report stated that a spectator "reached down and came in physical contact with Spartans coach Mel Tucker, touching his head."

The fan was later identified and banned from all future games at the stadium.

The university said it plans to remove 45 seats adjacent to the tunnel area, near the base of Section 1, to widen the tunnel.

"This is being done to widen access to the field for competitors, staff, and game personnel entering and exiting from the tunnel and is a direct result of a thorough safety review following the season," Michigan athletics spokesperson Kurt Svoboda told WXYZ. "Our goal is to ensure a safe and healthy environment for student-athletes, coaches, support staff, and all fans associated with games at Michigan Stadium."

Officials said they already reached out to ticket holders in the affected area seats to find comparable seating elsewhere.

Michigan plans to make an additional number of standing room-only tickets for the 2023 season to keep its capacity at 107,601 -- the Big House is currently the largest stadium in the country.

On the same day in Oct., eight Michigan State players were suspended following an ugly post-game incident in which two Michigan players appeared to be attacked by several Spartans in the tunnel leading from the field.

MSU defensive back Khary Crump, who was captured on video swinging his helmet at Wolverine player Gemon Green, accepted a plea deal, including pleading guilty to two misdemeanors.

Increased security staffing was added afterward to areas bordering the tunnel opening and the field.