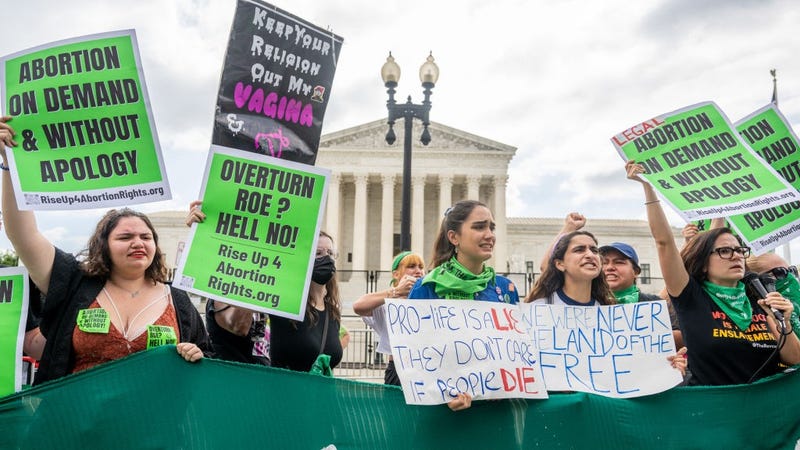 Activists began to gather outside of the U.S. Supreme Court on Friday morning to protest the decision in the Dobbs v. Jackson Women's Health case that suddenly overturned on Friday abortion rights that were established by Roe v. Wade in 1973.

Hundreds of people, both in support and protest of the SCOTUS decision, were seen outside the court in Washington, D.C. holding signs and chanting. Some prayed, others cried and both sides yelled, either in support of the decision or against it.

"It's a heartbreaking betrayal of half of the country," former federal prosecutor Jennifer Rodgers told CNN. "I'm getting — watching the women there — it's emotional."

“This is a fascist ruling. This is illegitimate," an abortion rights activist yelled at the protest, according to The Wall Street Journal. "We need massive nonviolent mass outpourings of resistance across this country," she added.

People gather outside the U.S. Supreme Court building, both in support and protest, of the high court's ruling to overturn Roe v. Wade and end the 49-year constitutional protection for abortion. https://t.co/iI8CleejwX pic.twitter.com/oThlkOwzkh

According to The Washington Post, the Frederick Douglass Memorial Bridge was shut down on Friday morning after a person "climbed to the top of a 70-foot-tall archway."

"It feels like we’re at a Justin Bieber concert," Tanya Matthews, who supports abortion rights told The Washington Post. "They don’t understand the gravity of this decision. Just because it’s not legal doesn’t mean it isn’t going to happen."

By 11 a.m. ET this morning, not even an hour after the decision, there were more than 1,000 people protesting outside of the Supreme Court, according to Bloomberg. It was expected to keep growing.

The Supreme Court building had previously been fenced off, yet police officers still created a barrier in front of the building as protesters gathered. The Metropolitan Police Department posted a statement to Twitter saying that they are "providing the necessary resources and support to keep our community safe" amid the protests.

MPD and @DC_HSEMA release statement regarding demonstrations at the Supreme Court. pic.twitter.com/1ks3b07D4H