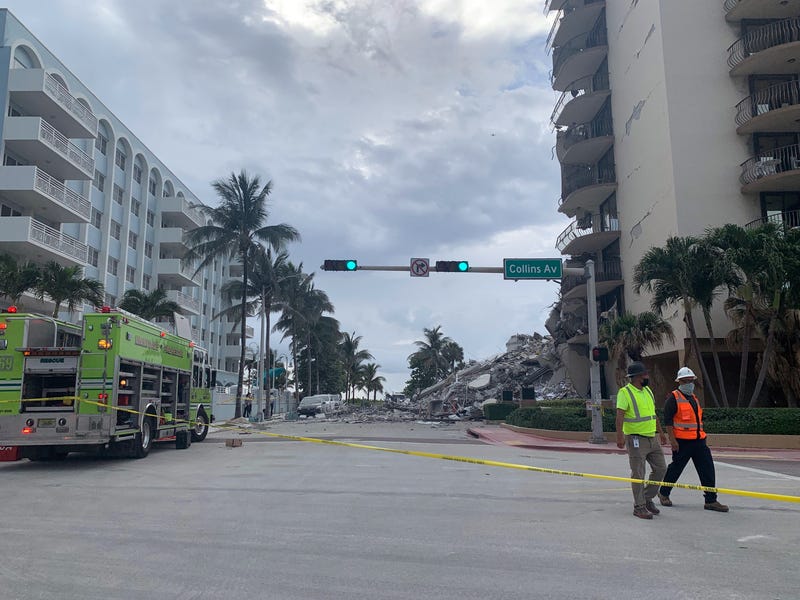 June 24, 2021; Surfside, FL, USA; A huge mound of rubble spills onto the street after the partial collapse of a 12-story condominium building early Thursday, June 24, 2021 in Surfside, Fla. The area around the condo is cordoned off, with about 100 law enforcement officers gathered. Mandatory Credit: Romina Ruiz-Goiriena-USA TODAY NETWORK Photo credit Romina Ruiz-Goiriena-USA TODAY

At least one person is dead due to the partial collapse of a multi-story condominium building in Surfside, a town in Miami-Dade County, Fla.

Tweets from Miami-Dade Fire Rescue said 80 first responder units arrived at the Champlain Towers South condo scene early Thursday morning.
According to the Miami Herald, the building, located at 8777 Collins Avenue, was built in 1981 and had more than 100 units on 12 floors.

#MDFR is on scene of a partial building collapse near 88 Street & Collins Avenue. Over 80 MDFR units including #TRT are on scene with assistance from municipal fire departments. Updates will be provided on Twitter as they become available.

Surfside Mayor Charles Burkett said 10 people were treated for injuries, two were transported to the hospital and one person died. CNN reported that Burkett said the building was undergoing roof work, though it is unknown whether that was a factor in its partial collapse.

“This is a horrific catastrophe. In the United States, buildings just don’t fall down," Burkett told CNN.

It is still unclear what caused the collapse.

Nicholas Balboa, a man who was walking his dog in the area when the building came down, told CNN how he found a 10-year-old boy trapped in the debris.

“I was thinking to myself, 'how could anybody survive this?' As I was thinking that, I heard a voice yelling,” Balboa said, adding that as he got closer, he saw the boy “sticking his hand up through the debris.”

Frank Rollason, director of Miami-Dade Emergency Management said crews managed to save a few more, including a woman whose leg needed to be amputated for her to be removed from the rubble.

Although Burkett and others fear the building could totally collapse, rescue teams continued to look through the site. At least 11 streets were closed near the site to allow for the rescue mission.

As of 8 a.m., Rollason said emergency workers think they have cleared all survivors from inside the tower and that 70 of the units have been destroyed or damaged. Overall, 35 people were rescued from the building, as well as two from the rubble, and the number of people missing from the building was unclear Thursday morning.

A family reunification center for survivors of the collapse was set up nearby on Collins Avenue, said Miami-Dade Fire Rescue and recue efforts continue.

UPDATE: The correct address for the family reunification center is 9301 Collins Avenue. https://t.co/Mb5O5TJLjx

“We know we’re going to do everything we possibly can to identify and rescue those who have been lost in the rubble,” said Miami-Dade County Mayor Daniella Levine Cava during a press conference Thursday.

Rollason said some nearby buildings have been evacuated.

Storms in the Surfside area disrupted the press conference and are a concern for the remaining building structure.