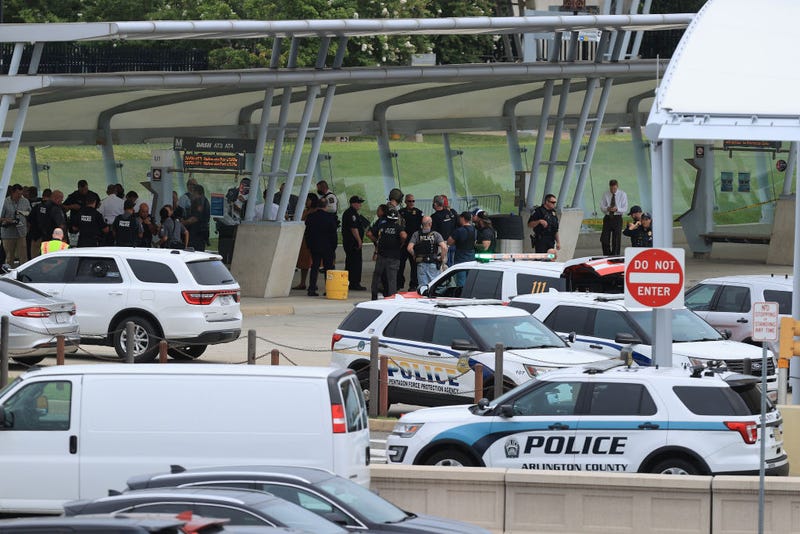 A police officer was fatally stabbed and a suspect was shot and killed during a violent outburst at a transit center outside of the U.S. Pentagon building that sent the facility into lockdown Tuesday morning.

Police say the incident unfolded around 10:37 a.m. when an officer was attacked on a Metro Bus platform at the Pentagon Transit Center, which is accessed by thousands of personnel entering and leaving the Pentagon building every day. It's located just outside the entrance of the facility, which is the headquarters of the United States Department of Defense.

Multiple shots were fired and several people were injured, according to police.

One of the victims is said to be a Pentagon police officer, who was transported to the hospital and pronounced dead. The Associated Press reports that the officer was stabbed. Information on the officer's identity has not yet been released.

The suspect was shot by law enforcement and died at the scene, the AP reported. Police confirm they are aware of only one suspect involved in the incident.

#JUST NOW by Independence & 4th NW - the police procession passes by with officers saluting a fallen law enforcement member as the ME van passes by. I’m told this is for the Pentagon officer who died after this morning’s shooting. @fox5dc pic.twitter.com/eXrVBXnnmy

Authorities have not yet provided details as to how the incident unfolded. Police would not say if the attack was an attempt to gain entrance to the Pentagon building.

The Pentagon was placed on lockdown for about two hours.

The Pentagon has lifted the lock down and has reopened. Corridor 2 and the Metro entrance remains closed. Corridor 3 is open for pedestrian traffic.

Just before noon, the Pentagon Force Protection Agency tweeted that the scene of the incident was "secure." The public was asked to continuing avoiding the area due to the ongoing investigation. Bus traffic was diverted to other stops.

The scene of the incident is secure. It is still an active crime scene. We request that everyone stay away from the Metro rail entrance and bus platform area. Transportation at the Pentagon is diverted to Pentagon City.

The Arlington Fire Department tweeted that they encountered multiple patients at the scene. It's not known how badly anyone was injured.

This video is at 10:49 am as Pentagon police work on the two people down near the Metrobus at the Pentagon transit center. #pentagonshooting @WTOP @hhowardWTOP pic.twitter.com/nVIWxeHdvc

At a news briefing with Pentagon Press Secretary John Kirby, Police Chief Woodrow Kusse declined to give specific details about the incident, saying the investigation is active and ongoing.

Kirby said more information will be released as the investigation allows.

The FBI is leading the investigation.

At this time, it would be premature to speculate on motive, and in order to protect the integrity of the investigation we cannot provide additional details at this time. There is no ongoing threat to the public

This story is breaking and will be updated.