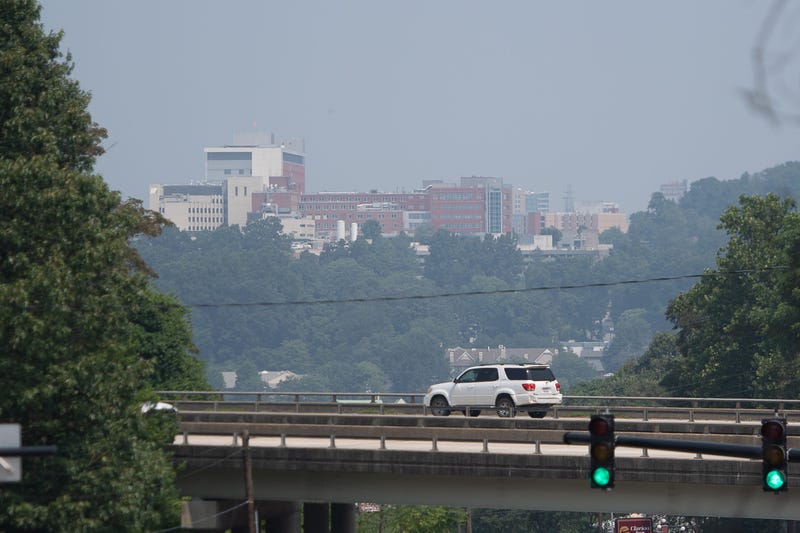 Western wildfires are the cause of the smoky or hazy skies Western North Carolinians are seeing in the area. Photo credit Maya Carter/Asheville Citizen Times via Imagn Content Services, LLC
By Lauren Barry

As smoke from wildfires on the West Coast of the U.S. and Canada spread across the continent, people suffering from COVID-19 could been at a greater risk of dying.

“Smoke from wildfires could make it harder for people to fight off COVID-19 infections and the emerging variants because their immune systems are already battling pollution,” said a Friday report from National Geographic. “Studies have shown that people exposed to air pollution are more likely to die from COVID-19.”

According to National Geographic, wildfire smoke is impacting residents on the opposite coast Manhattan. They talked to a 29-year-old asthmatic who lives in Manhattan and is experiencing symptoms more severe then they have ever been in the U.S.

“To see wildfires have an actual effect on this coast…I was in disbelief,” he said.

Discover Magazine research this week showed that smoke across the country can be seen on a satellite view. It is making its way across the nation – and across the Atlantic Ocean to Norway and Sweden – after being picked up by a jet stream, said the outlet.

How many fires are in there in the Pacific PNW? As of Saturday, July 24, there are currently 16 uncontained large 🔥 fires in the PNW. 6⃣ in Oregon and🔟in Washington for a total of 643,047 active acres.

As of Friday, 300 wildfires were burning in British Columbia as well as 80 in the U.S., said National Geographic. The largest fire is located in Oregon and has burned more than 400,000 acres. The fires have been exacerbated by heat waves, drought and climate change, National Geographic said.

“The climate impacts we see today give us a glimpse of the future unless we limit temperature rise,” said United Nations Secretary General António Guterres in a July 22 tweet.