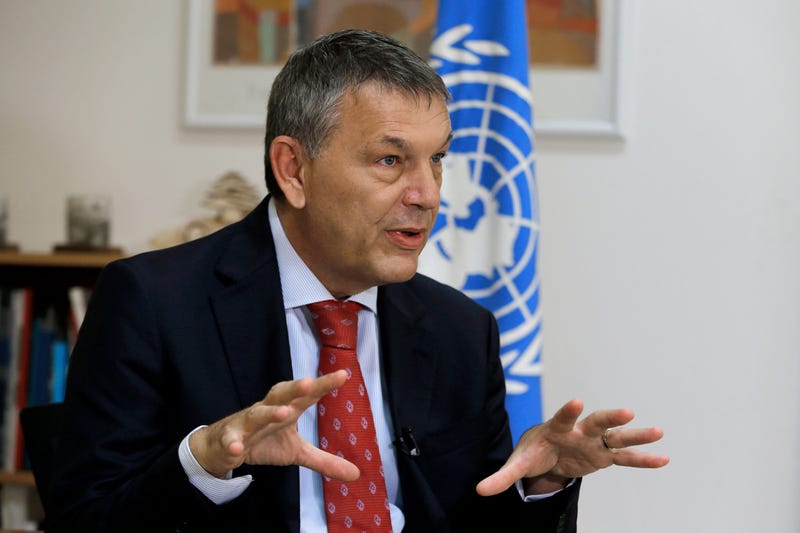 Photo credit The Commissioner-General of the U.N. agency for Palestinian refugees Philippe Lazzarini, speaks during an interview with The Associated Press at the U.N. relief agency, UNRWA, headquarters in Beirut, Lebanon, Wednesday, Sept. 16, 2020. The financial crisis that the U.N. agency for Palestinian refugees is experiencing could lead to ceasing some of its activities in what would raise risks of instability in this volatile region, Lazzarini said Wednesday. (AP Photo/Bilal Hussein)
By The Associated Press

BEIRUT (AP) — The U.N. agency for Palestinian refugees is experiencing a financial crisis that could force it to halt some services to an already impoverished population of more than 5 million people, the head of the agency said Wednesday.

Philippe Lazzarini also warned in an interview with The Associated Press in Beirut that the spread of coronavirus, an economic meltdown in Lebanon and a huge deficit in UNRWA’s budget are deepening the hopelessness among Palestinian refugees, some of whom are trying to flee the Mediterranean nation on migrant boats.

UNRWA was established to aid the 700,000 Palestinians who fled or were forced from their homes during the war surrounding Israel’s establishment in 1948. It now provides education, health care, food and other services to 5.8 million refugees and their descendants in the West Bank, Gaza, Jordan, Syria and Lebanon.

U.S. President Donald Trump said in January 2018 that the Palestinians must return to peace talks with Israel to receive U.S. aid money. He has since put forth a plan for resolving the conflict that heavily favors Israel and was rejected by the Palestinians.

“I do believe that ceasing our activity in a context where there is such a level of despair, such a level of hopelessness, can only fuel the feeling that the Palestinian refugees are abandoned by the international community," said Lazzarini, who took office in March.

Lazzarini said supporting UNRWA “is one of the best investments in stability in the region at a time of extraordinary unpredictability and volatility.”

“We cannot let the situation get w