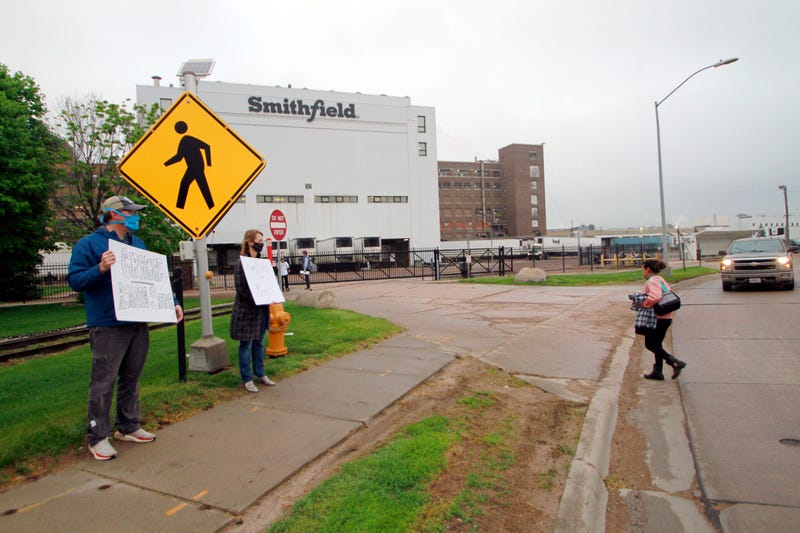 Photo credit FILE - In this May 20, 2020, file photo, residents cheer and hold thank you signs to greet employees of a Smithfield pork processing plant as they begin their shift in Sioux Falls, S.D. Federal regulators said Thursday, Sept. 10, 2020, they have cited Smithfield Foods for failing to protect employees from exposure to the coronavirus at the company's Sioux Falls plant, an early hot spot for virus infections that hobbled American meatpacking plants. (AP Photo/Stephen Groves, File)
By The Associated Press

The nature and timing of the violation wasn’t immediately clear from the Occupational Safety and Health Administration, but the announcement included the latest assessment of the virus’ impact in Sioux Falls. Four plant workers were killed by the virus during the spring and at least 1,294 workers were sickened. Only two deaths among employees had been previously known.

Smithfield Foods, which is based in Virginia, said it planned to contest the citation and $13,494 fine. Keira Lombardo, a spokeswoman for the company, called the citation “wholly without merit" in a statement and argued the company had taken “extraordinary measures” to protect employees from infections.

OSHA did not respond to a request for details on what conditions at the Smithfield plant led to the violation.

OSHA conducted an investigation that spanned months as it conducted 60 interviews and reviewed over 20,000 pages of documents, according to Lombardo. She blamed coronavirus infections in Sioux Falls for causing the outbreak at the plant

Employees at the plant have said Smithfield did not do enoug h to prevent inspections in the plant, where workers labored elbow-to-elbow as they processed nearly 5% of the country's pork. The union at the plant, the United Food and Commercial Workers, has said that it had been attempting to negotiate for more coronavirus protections leading up to the outbreak. After cases kept accumulating, Smithfield shuttered its plan t for nearly three weeks.

But large outbreaks at meatpacking plants across the nation soon followed. Meatpackers have aggressively defended their role in providing the nation's food supply, warning that if plants closed because of the pandemic, grocery stores shelves would see shortages of meat.

After President Donald Trump signed an executive order in Apri l deeming meatpacking plants as critical infrastructure, they mostly stayed open. The country's slaughterhouses rebounded, and commercial red meat and pork production for this year has even exceeded last year, according to the latest data from the U.S. Department of Agriculture.

OSHA began investigating Smithfield's Sioux Falls plant on April 20, shortly after a team from the Centers for Disease Control and Prevention toured the facility to offer recommendations on how meatpacking plants could operate during the pandemic.

Smithfield CEO Kenneth Sullivan has defended how the company handled the virus outbreak, sending a blistering, 14-page letter to Senate Democrats Elizabeth Warren and Cory Booker after they inquired into how meatpackers have protected workers. Hundreds of employees signed on to Sullivan's response. The company has asked its employees to sign onto a statement saying it took “aggressive measures” to protect their health.

But Nancy Reynoza, who runs a Latino community organization in Sioux Falls and organized protests for better conditions at Smithfield, said the company could still do more to keep its facilities such as bathrooms and locker rooms clean, though she acknowledged conditions have improved since the April outbreak.

Marc Perrone, the president of United Food and Commercial Workers, said, “This so-called ‘fine’ is a slap on the wrist for Smithfield, and a slap in the face of the thousands of American meatpacking workers who have been putting their lives on the line to help feed America since the beginning of this pandemic.”

news
Will you still need to wear masks at chains like Walmart and Target? This is where 15 major retailers stand
music
Tracee Ellis Ross responds to ‘Black-ish’ coming to an end next season: ‘It’s gonna be a good one!’
sports
'Dark Side of Football' series to feature episodes on Bill Belichick, the Browns and more: report
news
Ivanka Trump displays toned abs in sports bra and leggings on beach stroll
<img onerror="this.onerror=null; this.src='https://images.radio.com/aiu-media/og_775x515_0.jpg'; this.srcset=this.srcset.replace(new RegExp(this.srcset.split('?')[0], 'g'), this.src);" src="https://images.radio.com/aiu-media/GettyImages1314257111-2b117f9e-00a2-403a-9114-00e8e94eab29.jpg?width=300&height=169&crop=16:9,offset-y0" srcset="https://images.radio.