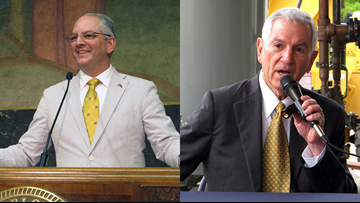 A robo-call poll of 660 likely Louisiana voters finds the governor’s race a virtual tie with 49 percent of the respondents supporting Governor John Bel Edwards and 49 percent who say they plan to vote for Republican challenger Eddie Rispone.

“Whoever is able to mobilize their supporters to the polls on Saturday, they are going to be victorious, because it is all a matter of who is going to show up,” said Edgewater Research pollster Doctor Edward Chervenak.

Edgewater Research conducted a similar survey in October after the primary, and Edwards had a four point lead, but Chervenak said that doesn't necessarily mean Rispone picked up new voters.

“The second poll, there were more Republicans and fewer Democrats, and so I attribute the shift just to the nature of the samples in the two polls,” said Chervenak.

Chervenak says the poll shows there is a lot of partisan loyalty.