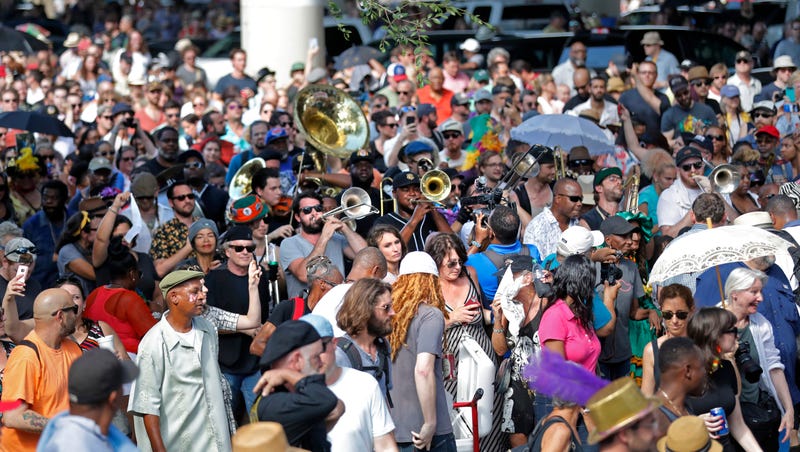 It was only a matter of time before New Orleanians took to the streets to honor to honor the life and legacy of  Dr. John.

Kermit Ruffins announced a second line to honor the life and legacy of "Mac" Rebennack to be held Friday afternoon.

The New Orleans-style farewell kicked off from Ruffins' Mother-in-Law Lounge on N. Claiborne Ave. at 4 o'clock.

Over a thousand fans quickly assembled in the streets to celebrate the 'Night Tripper' in a special home-town parade.

The six-time Grammy Award winning pianist, performer and Rock and Roll Hall of Fame inductee was among the best-known New Orleans musicians of his generation.

A legend joins the eternal groove today. Our hearts, thoughts, love and gratitude are with Dr John’s family, friends, and community https://t.co/uw0BfMPSDY

Dr. John, whose real name was Mac Rebennack, was a popular singer, songwriter, pianist and ambassador for New Orleans.

His public appearances had been minimized in recent years, which led others to wonder about his health.

Dr. John was also a 2011 Rock and Roll Hall of fame inductee, and was one of the best known New Orleans musicians of his generation.

New Orleans just lost a giant. Second one, after the recent passing of Leah Chase. RIP Mac Rebennack, AKA Dr. John. For a great read, check out his autobiography some time. And listen to his music any time.

His disctintive raspy voice was one of the most recognizable in all of music.

His family today released this statement:

"Towards the break of day on June 6, 2019, iconic music legend Malcolm John Rebennack, Jr., professionally known as Dr. John, passed away of a heart attack. As a Rock N Roll Hall of Fame inductee, six time Grammy winner, songwriter, composer, producer, and performer, he created a unique blend of music which carried his home town, New Orleans, at its' heart, as it was always in his heart. The family thanks all whom have shared his unique musical journey, and requests privacy at this time. Memorial arrangements will be announced in due course."

"Mac Rebennack, who told us all to call him ‘Dr. John,’ was truly one-of-a-kind. He was a beautiful soul, a powerful pianist, and one of the cultural icons that helped make New Orleans what it is," said New Orleans Mayor LaToya Cantrell. "We say goodnight to the Nite Tripper, and goodbye to a unique talent. May he rest in God’s perfect peace."