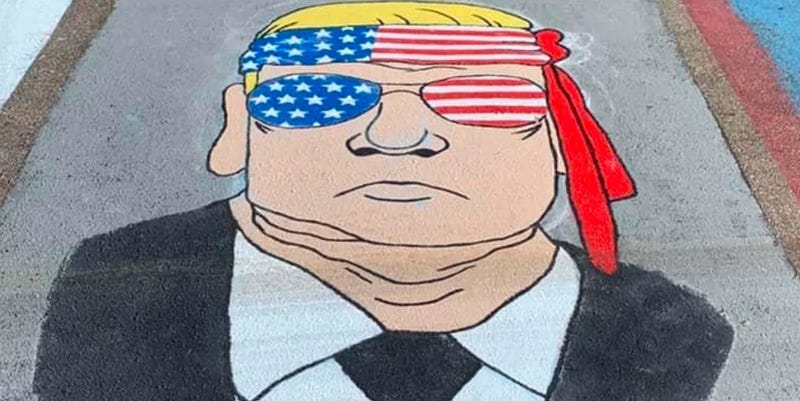 A Pine High School Senior plans to take the Washington Parish School Board to federal court because his parking space that featured a painted image of President Donald Trump was painted over after concerns were raised by the school system superintendent.

Ned Thomas was participating in the school’s “Seniors Paint Your Parking Spot” program and had his design approved by the principal, only to have it painted over after a paid artist completed the image.

“I woke up and I had missed calls from our principal and told me, ‘I’m sorry, but it had to be painted over.’  The school board office had forced the school to do it.  I was just quite shocked and I didn’t know what to think exactly and I went out there and it was gone,” said Thomas.

Thomas says he’s a big admirer of the Commander-in-chief and feels it should be okay to have a painting of a US President, but he was told that the school superintendent says it was too political.

“If they allowed this political character to slip, then they would have to allow other political things to slip, but there was already plenty of political parking spots.  They painted over my spot that I’m aware of and they painted over another corner of a kid’s and it said ‘Trump 2020’ on the corner,” said Thomas.

Washington Parish Superintendent Frances Varnado was not available for comment.

The parking spot paint job of President Trump sporting an American flag headband and matching aviator sunglasses cost $200, but now it’s just a gray spot.  Thomas says the rules were simple: no negative, rude, or offensive language, pictures, or symbols, and now he plans to go to court with a clear goal of seeking an injunction ordering the School Board to allow for the repainting of the picture and seeks $200 for damages for the destruction of the first version and attorney’s fees.