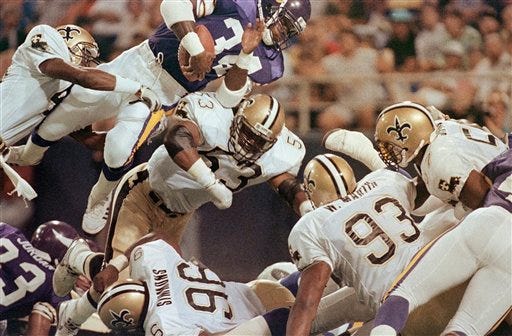 Vaughan Johnson, who was part of the New Orleans Saints menacing "Dome Patrol" in the 1980s and early 1990s died at the age of 57.

Johnson died at  his home in North Carolina following a battle with kidney disease.

The 6-foot-3, 235-pounder finished his career with 669 tackles, 12 sacks and 11 forced fumbles.  Johnson was known as a punishing hitter.

He played eight seasons with New Orleans.  The famed linebacker corps consisted of Johnson, Rickey Jackson, Pat Swilling, and Sam Mills.  The "Dome Patrol was thought by many to be the linebacker unit in the history of the NFL.

"Vaughan was a special guy," Pat Swilling told the The Times Picayune-The New Orleans Advocate.  "For a guy who would knock your head off on the field, his demeanor wasn't like that. He always had a great smile on his face and was just a great guy. He will be missed."

WWL's Bobby Herbert also posted on Twitter Friday morning.  "He was a warrior on the field, but one of the nicest guys I ever known. Condolences to his wife Shirley, and the Johnson family."

Very sad to hear that my former teammate Vaugh Johnson has died. He was a warrior on the field, but one of the nicest guys I ever known. Condolences to his wife Shirley, and the Johnson family. #domepatrol