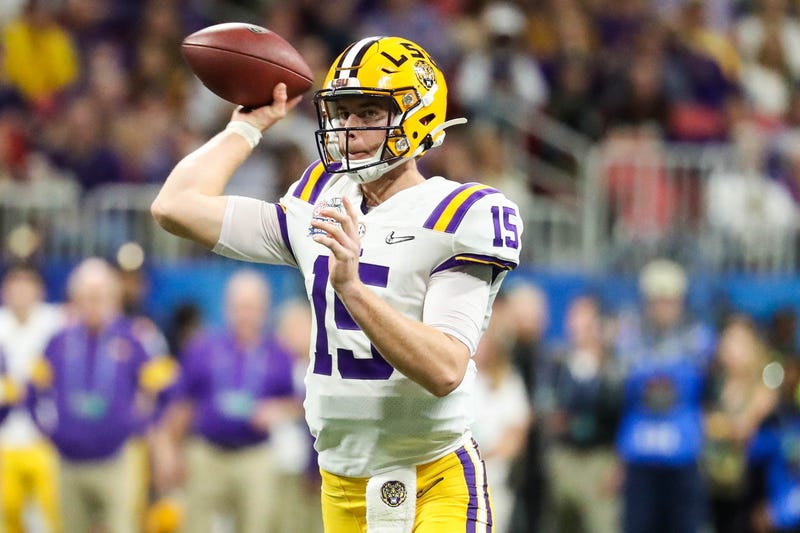 As LSU football players report for voluntary workouts, the identity of this team is yet to be established.  Several new/old faces are going to have prominent roles in the Tigers’ defense of their national title.  Here are the top 5 most important Tigers this season.

1.  Myles Brennan:  How does that saying go? You don't want to be the man to follow THE MAN (Joe Burrow).  Well,, that's not the case for Brennan, and frankly, he doesn't have a choice.  Brennan is taking over the keys to the high performance sports vehicle that is the LSU offense.  For three years Brennan has patiently waited for this opportunity.  In a day in age of the transfer portal, where players can move to a different school to get more playing time, Myles Brennan told me, "I wanted to see this thing through.  I wanted to honor my commitment to LSU."   That says it all for me.  LSU fans would be wise not to expect Brennan to have the same success that Burrow had last season.   That also doesn't mean Brennan won't have success.  I am certain he will.  The season Burrow led likely won't be replicated in a lifetime. The junior gunslinger, however, has more arm talent than the top NFL pick.  "I'm talking about the way he spins it.  The ball explodes out of his hand.  He has a better arm than Burrow," explained the Cajun Cannon Bobby Hebert.  I trust that take coming from a guy, who played quarterback in the pros for 14 years.

2.  Scott Linehan:  Joe Brady is now the offensive coordinator for the Carolina Panthers.  Linehan slides in to replace Joe Burrow’s former passing game coordinator.  The former NFL offensive coordinator is highly respected for his creative play design as a pro coach.  He even has some head coaching experience with the Rams in 2006 through 2008.  Make no mistake Steve Ensminger is calling the plays, and Linehan doesn't need to reinvent the wheel. He's a fresh set of ideas and a trusted voice in the booth next to Ensminger on game day.  The approach for Linehan is simple, "If it's not broke, no need to fix it.”

3.  Derek Stingley Jr.:  He's the best player on LSU's defense, and arguably could be the best player on offense as well.  Head Coach Ed Oregon shared this with Bobby and me on Sports Talk a couple of weeks back, "We're eventually going to play him on offense, but probably not this year.” I'll take it a step further.  He's the best cornerback in the country.  The sophomore is a flat out stud, shutting down one side of the field for most offenses.  As a freshman last season he racked up All American and All SEC honors, helping the Tigers win a National Championship. As a rookie, Stingley Jr, led the SEC in interceptions with six.  He was fifth nationally in that same category again as a true freshman.  This guy is a true shut down corner; he has to do big things.

4.  Dare Rosenthal:  First off, I love his name.  Sounds more like a Superhero name than a football player.  None the less, Rosenthal is the blindside protector (left tackle) of QB Myles Brennan.  Some NFL draft experts think Rosenthal could be a first round pick.  He's important for many reasons, but giving Brennan peace of mind sitting in the pocket, reading defenses is his most important role. Rosenthal is a first-rate pass blocker and a really strong run blocker.  He'll anchor LSU's offensive line and provide valuable time for Brennan to get the ball down the field.

5.  Bo Pelini:  Former defensive coordinator Dave Aranda is now the head coach at Baylor.  When he left, the first guy Coach Ed Orgeron called was Pelini.  This is Pelini's second stint with LSU as the defensive coordinator.  The fiery defensive mastermind coordinated the Bayou Bengals’ defense under Les Miles from 2005 to 2007 with great success.  Pelini is the complete opposite of the mild, laid back Aranda.  He's going to push the defense, and the defense will take on his tough, gritty personality.  They did when he was here the first time, so there is no reason to think they won't this time around.  I could make the argument that Pelini probably should be higher on this list, because the defense has to be great this year.  The offense is likely and understandably going to take a step back from last year.  Pelini is bringing back his attacking 4-3 defense that he knows and teaches so well.  He's got plenty of studs to make it work.  Scratch that, forget making it work; Pelini will make LSU's defense feared once again.

Last year under Aranda, LSU's defense didn't live up to the usual standard in Baton Rouge.  His defense finished 31st in the country in yards and points per game.  The Tigers were also ranked No. 59 in passing yards allowed per game under Aranda's watch.  LSU's run defense ranked No. 21 in rushing yards surrendered per game.  Under Pelini from 2005 to 2007 LSU finished no worse than No. 17 in any of the same categories.  Pelini had eight top 10 finishes in each of those categories in three seasons as the Tigers’ defensive coordinator.  Aranda had two top 10 finishes in the same categories in four seasons with LSU.  Get the point?

As defending champions, LSU is now the hunted, no longer the hunter.  With that comes an opponent’s best game, best play, best tackle and game plan.  These five Tigers will hold many of the keys needed for LSU to repeat as champs in 2020.  Ready for some Tiger Football?  Hellllllllllllll yea!