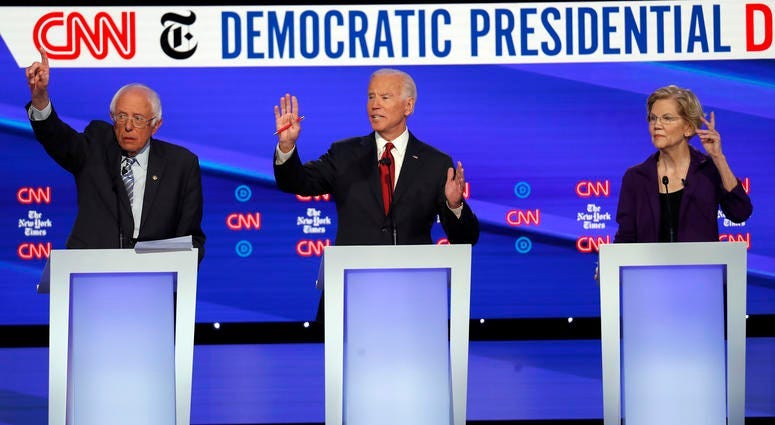 Last night we had another opportunity to hear from Democratic primary candidates and hear about their feelings on any number of issues. A number of questions, probative in nature, some very simple, could have been answered with a simple yes or no answer - but those seemed to be the hardest questions for candidates to answer."Those were the moments that frustrated me more than ever," Newell said on his program Wednesday morning. "I want to hear the yes or no, but they walked away from it, didn't have it in their vocabulary. Very interesting. I didn't only frustrate me, it was obvious that it frustrated the moderators and the other candidates. At one point, Vice President Joe Biden said, 'some people here are just being vague.'"To discuss the winners and losers in the debate, Newell invited Dr. Joshua Darr, an Assistant Professor of Political Science at LSU to join the program."What was obvious is that Elizabeth Warren is at least being treated like the front runner," Darr began. "The polls certainly show that she's passed Biden or tied with him, but how you really know she's the front runner is that everyone wanted to talk to her or about her and as a result she got a lot of time to respond. She got to talk about six minutes longer than any other candidate because of all that back and forth, and that's certainly a different dynamic than previous debates where Joe Biden was treated like the front runner by the other candidates.""Right," Newell agreed, "She reminded me of a student in class, who when the teacher asks a question, they jump out of their seat,'ooh ooh ooh I know the answer!' And when she wanted to respond to criticism that others directed at her, she acted the same way.""She certainly had the chance to control the conversation," Darr said. "Other candidates kept referencing her, which according to the rules, allowed her extra time to speak. I think the moderators definitely did get out of the way more than previous debates. Saints fans will recognize this - if you leave the game talking about the referees, they were probably a bit too present. So it was nice to have the moderators out of the way.""One of the things that struck me," Newell said, "and I'm trying to be as objective as possible here... I thought leading the debate with a question about the appropriateness of the impeachment inquiry was really more Democratic propaganda being put out there. Just giving them an opportunity to rail on the President.""It was interesting starting the debate with everyone speaking from a place of agreement," Darr responded "Having everyone on stage agreeing with each other might not be the most interesting way to start, but at the same time, it's certainly the largest news story right now, one that everyone has to respond to, and the candidates have different levels of responsibility in. There are a lot of Senators on that stage. That was my initial thought, that if they were going to talk about impeachment, it's going to privilege the Senators up there because they will actually have a role, assuming it gets to that point."Newell pointed out how difficult a time Warren had not getting pinned into a corner about the high cost of her healthcare plan. "This discussion about Medicare for All - that's where Warren really seemed to take it on the chin, it seemed that she had a real difficult time giving a yes or no answer there, just giving this overarching vision and trying to stimulate emotions by telling stories, but never really did offer the math. Amy Klobuchar said, 'show your math, show your work, and we'll get off of you.'""She was very insistent that she was going to talk about healthcare costs, and how Medicare For All would lower those costs," Darr agreed. "On one hand, it's a pretty tried and true tactic, to answer the question you wish you were asked, but when you keep getting pressed on it, it becomes obvious you're not answering the question you were asked.""It seems like Warren is more of a policy wonk but not so strong in the math world," Newell finished. "She still doesn't answer the question and they show the difference as it relates to courage by pointing out that Sanders at least is coming out and saying the middle class is going to have to pay more taxes. The math reveals that's just the way it's going to be!"Hear the entire interview in the player below.