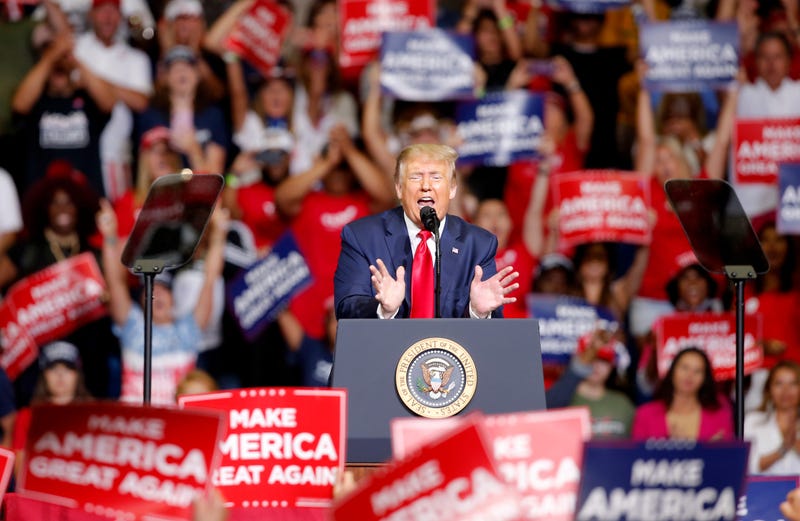 Trump’s own people promised a massive crowd that would include 40,000 outside of the BOK Arena in Tulsa. A full stage with large video screens was set up outside of the arena to accommodate the Trump loyalists. Fire marshall estimates put the crowd inside at just under 6,200 and the vast areas of empty blue seats were visual proof that the crowd did not live up to the hype. And the 40,000 who were supposed to be outside - one estimate was there were about 25 people there.  The outside appearance by President Trump was cancelled.

The size of the crowd is insignificant compared to the idiotic things President Trump talked about during his long speech. Sometimes you got the feeling the President Trump was just talking until he could think of something to say.

What should frighten every American is the threat to our freedom that comes in the form of total denial of the truth. Sure ALL politicians exaggerate and even lie - but the President’s exaggerations and lies are not as dangerous as his supporters’ reluctance to recognize the truth.

There should be no defense for President Trump saying that he wants his people to cut back on testing because that would lead to the appearance of a lower number of COVID-19 cases. The actual number of cases would still be there - but the lower number from less testing would make it look better. That’s like saying we should not screen for cancer to make the number of cancer patients in America appear lower. On my SOTA Facebook page - one post said that if police would stop pulling over cars weaving across lanes then there would be fewer DWI arrests.

On my SOTA Facebook video posted this morning - there were some excuses for the disappointing crowd and the lack of masks and social distancing at the Trump rally. One person posted that the difference between a protest and a rally is that protesters can get in your face - presumably to easily spread the coronavirus. Well, I saw a lot of yelling and cheering and Trump supporters right in each other’s faces during the rally. Another post tried to call me out on the empty seats saying wouldn't having no empty seats not be a good thing? That was a direct comment about social distancing. The seats that were empty were mostly together, and the crowd in the seats and on the floor were right next to each other with zero social distancing.

And then there was the 15 minute monologue about President Trump’s walk down the ramp after speaking to the West Point graduates. It was more like a SNL skit than a president explaining his actions. And the president’s claim that he “ran down” the last 10 feet of the ramp was totally bogus, and actual video proved it wasn’t true.

President Trump took credit for saluting 600 times as 1,200 cadets in pairs appeared before him. Trump’s description of the exhausting feat of saluting 600 times was embarrassing considering that the young men and women he was saluting may be headed for actual combat in a war zone. Trump made it all about how he was the real hero for saluting 600 times. He made it seem like such a physical task that I’m surprised Trump’s bone spurs allowed him to complete such a mission.

The excuses and the comeback that “so and so did it to” is a clear indication that our political divide is a threat to our nation. If even the strongest Trump loyalists cannot see the obvious exaggerations and lies - then Trump will continue to pull the wool over the eyes of his supporters.

It’s time for the citizens of this country to stand up and be accountable for the truth. That will be the only way to force the politicians to be accountable.

The rally was a “cluster Trump.”