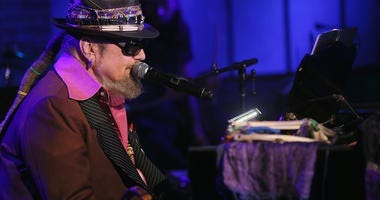 A private ceremony was held at the Orpheum Theater in downtown New Orleans Saturday afternoon for the iconic music legend known to the world as Dr. John.  I was honored to have been among the special guests invited to attend the tribute to “Mac” - the name many who knew him well used to refer to their friend, mentor, teacher and musical ambassador to New Orleans.

The ceremony was private, with a highly scrutinized guest list; so it is out of respect that I choose to not specifically mention the people who eulogized Dr. John.  However, it is a proper tribute to Dr. John to share with you the collective message from the speakers.

There were the many expected comments from musicians who had worked with Dr. John,t alking about his unique style of music and the strong influence he had ,and continues to have, on their musical careers.  A prominent theme was that Dr. John was a great teacher and he enjoyed teaching.  Comforting was the mention that his music will live on through the many who learned from Dr. John.

To hear the tributes that afternoon and to hear of the many tweets that came from top musicians around the world only served to remind us all that Dr. John was one of those specially talented musicians whose respect, influence and popularity defied the reality that “Right Place, Wrong Time” was Dr. John’s only top 10 Billboard hit peaking at #9 in 1972.  That same year, “Such A Night” peaked at #42.  The Dr. had two other songs that reached the lower half of the Top 100 Billboard charts.

Respect for Dr. John’s specific style of New Orleans funk, rock and jazz defies that fact that he was not a mainstream artist with countless top hits, but the hits he had and the music he invented was so special that the world of music took note.  It was revealed by one of the speakers at the memorial ceremony that Sir Elton John tweeted that he “worshipped” Mac.

Stories came from those who met him and spent time with him when Dr. John lived in New York and in London.  But the most touching stories came from a few speakers who talked about how Mac became a true friend.  It seems Mac had a tendency to fully bond with some people even beyond his musical environment.  Dr. John befriended one young musician who got emotional when he spoke about how Dr. John showed an interest in him and became his friend to the point where he was there when this person’s son got his black belt in karate.  Everyone who attended wanted to know who this father was who knew Dr. John so well that Dr. John would take time to be there when his son received his black belt.

Nearly every speaker relayed a story about the language Dr John spoke.  The Dr.’s grammar may not have fit the pattern of the mainstream; but creative use of words, along with made up words, gave Dr. John his own language.  When leaving a place, Dr. John might say, “It’s time to ejaculate this place!”  He referred to children as “roots” and was once asked if he spoke Spanish to which Dr John said, “I don’t even speak English!”

As the speakers continued, many singing their favorite Dr. John song in addition to speaking, more was revealed about Dr. John - the man and the musician.  It was pointed out that Dr. John had a dedication to disobedience and personified the spirits of New Orleans. One speaker talked about Dr. John saying, “Life has and uphill and a downhill - and the downhill is more fun!”

Dr. John’s infatuation with voodoo and death made him uniquely qualified to represent the mystique that is New Orleans - a city known for special cemeteries and an interesting way to honoring but celebrating the life of someone passed.

The personal side of Mac is equally as down-to-earth and interesting as his music side.  Mac was a creative genius who followed the songs he heard in his head and brought them to life for the masses.

Dr. John did have a fascination with death, and it was mentioned during the ceremony Saturday that he always had one foot on this side of life and the other foot in the hereafter.  Many of the speakers talked about Dr. John’s spirit still being present.  One speaker said, “He ain’t dead - he’s just gone from the meat and bones.”

If in life - Dr. John was believed to have on foot on the other side - I think it’s safe to assume that right now he still has one foot on this side.