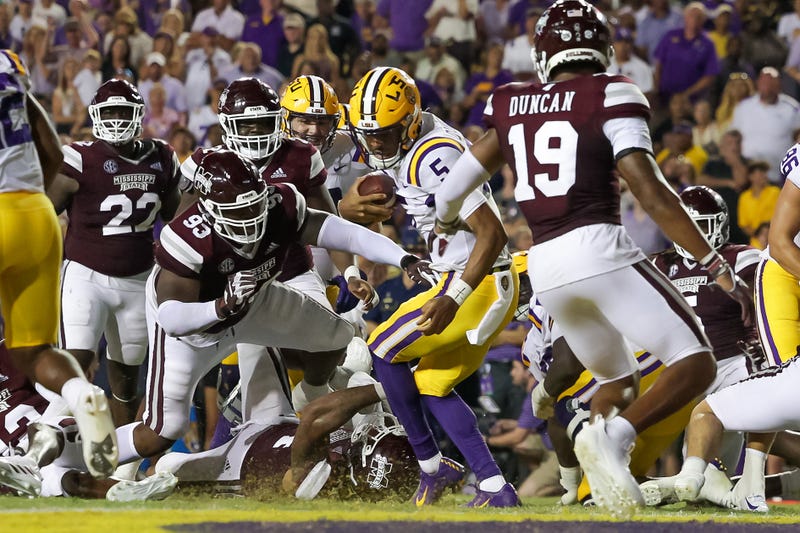 After struggling for almost two quarters, LSU came to life right before halftime. The Tigers powered through to a touchdown with 0:46 seconds remaining. That score propelled LSU in the 2nd half, where the home team outscored the Mississippi State Bulldogs 24-3.

The Tigers defense kept them in the game all night with pressure coming from the front seven that disrupted Bulldogs quarterback Will Rogers. Another key aspect of LSU’s game were playmakers in the secondary like safety Jay Ward, who came away with an interception in the 4th quarter to seal the win for LSU.

The Tigers 31-16 win over Mississippi State was filled with plenty of highlights and lowlights. We’ll break that down in this week’s good, bad and ugly.

GOOD:
LSU Defense:
Game balls could be given to two players on LSU’s defense,BJ Ojulari and Jay Ward. They swarmed the field, making tackles and disrupting the rhythm of State’s 5th best passing offense in college football.

Ojulari missed last week’s game against Southern, but returned in a big way with 1.5 sacks and two quarterback hurries on the night. The Bulldogs were able to run the ball efficiently in the 1st half, but LSU was able to make adjustments.

Freshman linebacker Harold Perkins also added to the pass rush. His sack in the 3rd quarter was a timely one that resulted in State’s final points of the night. The third down sack halted momentum and the Bulldogs were forced to settle for a field goal.

The other standout, safety Jay Ward. He led the Tigers in tackles with eleven total. Ward was able to make tackles and breakup passes on key 2nd and 3rd downs, which resulted in a stagnant Mississippi State 2nd half offense. His interception was Rogers’ only turnover of the night, and was a real knockout punch.

Offensive 2nd Half Adjustments:
LSU’s offense came out flat particularly in the 1st quarter. Jayden Daniels was only able to muster up 25 yards passing in the quarter. The Tigers finished the half (0/5) on 3rd down.

That all changed in the 2nd half, when LSU’s offense played more up-tempo. The Tigers took advantage of a key turnover near the end of the 3rd quarter that gave LSU the lead at the beginning of the 4th.

The LSU offense relied on Jayden Daniels’ legs to propel them forward; the QB scored at the start of the 4th quarter. This gave the Tigers the lead for good. Daniel’s rushed for 93 yards and his one score.

Wide receiver Malik Nabers continued to rebound from his rough start against FSU. Nabers finished the game with six catches for 76 yards.

BAD:
Special Team Blunders:
LSU continues to struggle on special teams and luckily it hasn’t come back to bite them like it did against FSU. The Tigers kick and punt return coverage will definitely need more work as players like offensive lineman Emory Jones and punter Jay Bramblett made tackles that could have resulted in big returns for the Bulldogs.

The Tigers also got bailed out late in the 4th quarter, when an 88 yard Bulldog kickoff return was nullified, after a Mississippi State holding penalty. Coach Kelly and Brian Polian will need to get this cleaned up before they face another SEC opponent.

Finally, the last “what are you doing” moment on special teams came from new punt returner Gregory Clayton Jr., when he tried to return a punt as the ball rolled near his feet. Normally, this wouldn’t be an issue, but when you’re surrounded by multiple Bulldog defenders…it’s probably not a wise decision.

UGLY:
Offensive Line:
The LSU offense did improve in the 2nd half, but at the start of the game, the offensive line kept the Tigers out of scoring range plenty of times. LSU’s first drive was stalled due to two false start penalties. The second drive was also stalled because of a false start penalty on 4th and 1.

In addition to inexcusable mistakes, what really hurt the Tigers offense early on was pressure on LSU QB Jaylen Daniels. Daniels was sacked on the Tigers’ third drive. And even worse, LSU wasn’t able to pick up a 3rd down conversion in the 1st half.

While all of this sounds negative, the Tigers will improve. What’s promising - LSU is starting two true freshman at both tackle positions and two sophomores at guard. As the season goes on, I expect the Tigers to experience growing pains at these positions, but long-term the future is bright.

Next up for LSU is New Mexico, who comes in with a 2-1 record. Much like Southern, I expect LSU to use this game to iron out their issues, before they face their next SEC opponent, Auburn.