I'm not a draft scout, nor a draft analyst, nor a self-proclaimed draft expert, and so I want to make it clear that what these people do, and how accurately they can forecast which draft prospects are cut out for big careers, is really impressive. Watching hours and hours of game film to come up with projections requires a special kind of eye, and though I like to think I can watch sports with a more knowledgeable eye than most, the takeaways that draft experts put out into the open are usually more insightful than what I can offer.

But they're not always right on the ball. This goes for every sport. Some of the same talented people who knew LeBron James deserved to be the No. 1 overall pick in 2003 thought that Sam Bowie was the right choice to go No. 2 overall in 1984, ahead of some guy out of UNC. The Atlanta Braves scouting department was not originally set on drafting Chipper Jones first overall in the 1990 MLB Draft, only opting for that backup plan after Todd Van Poppel said that he would not sign with Atlanta. And of course, we all know about names like JaMarcus Russell, Matt Leinart and Johnny Manziel, among others, that just never panned out in the NFL despite a lot of pre-draft hype and praise.

Instead of looking at the bad picks, though, let's take a look at five star NFL quarterbacks who looked at their NFL Draft projections or reactions, laughed, and used them as motivation to propel their professional careers. And again, this is not intended to call out scouts and analysts for faulty projections — there's probably no way that I could do any better — but instead aims to highlight just how much they achieved relative to what may have been expected of them. 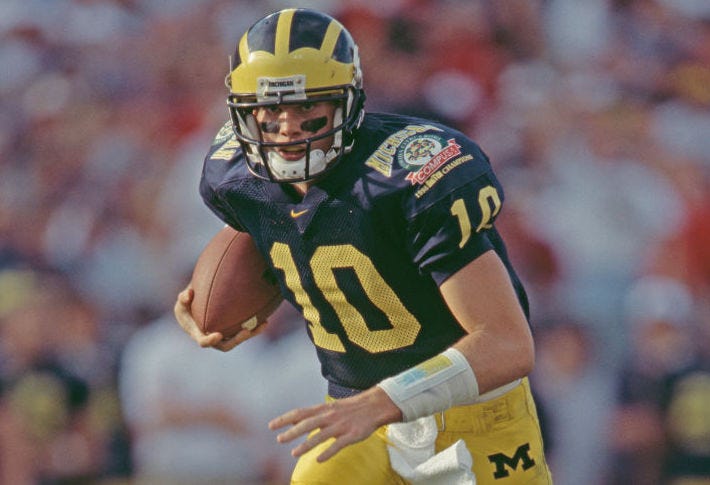 When was he drafted? 6th round, 199th overall in 2000 NFL Draft by the New England Patriots

What has he done? 14x Pro Bowl, 7x Super Bowl champion, 3x MVP, 3x All-Pro. So pretty much everything. He just won the Super Bowl at age 43 after shattering all sorts of over-40 records, and though he has said himself that he doesn't have all that much time left, he didn't really show many signs of slowing down throughout the 2020 season. He's very much up there with the best players that the game has ever seen, regardless of position, and has a legitimate case at the No. 1 spot.

But what were they saying before all of this? Not a whole lot of good, and his draft position is a good indication of that. One scout, according to NFL columnist Rick Gosselin, said the following: "Awful. Not even on my board. Weak. He'll make somebody a good husband or good medical salesman."

Not everyone was that harsh. A quarterback coach, again via Gosselin, said that he "could be a #2 in this league for a long time" due to his size, but also due to the lack of a #1 arm.

Brady himself listed a number of his so-called shortcomings on a 2017 Instagram post — "Poor build, Skinny, Lacks great physical stature and strength, Lacks mobility and ability to avoid the rush, Lacks a really strong arm, Can’t drive the ball downfield, Does not throw a really tight spiral, System-type player who can get exposed if forced to ad lib, Gets knocked down easily" — just for more evidence that he's overachieved to the highest possible extent and isn't afraid to let people know about it. 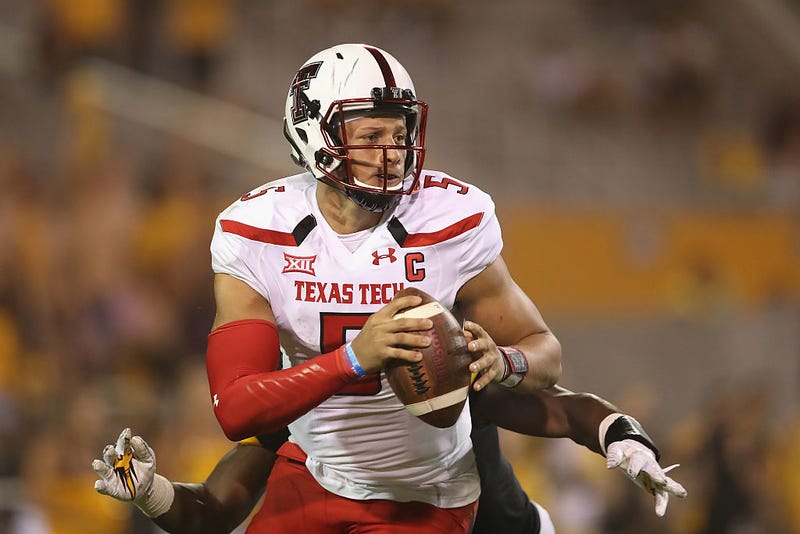 When was he drafted? 1st round, 10th overall in 2017 NFL Draft by the Kansas City Chiefs.

What has he done? 3x Pro Bowl, 1x Super Bowl champion, 1x MVP, 1x All-Pro. He's done all of this, mind you, in three years as a starting quarterback. His second season, which was really his first full one, was one which saw Mahomes casually become the second player in league history to record a 5,000-yard, 50-touchdown campaign. That list of achievements is going to grow, and grow, and grow some more over the next decade-and-a-half.

But what were they saying before all of this? They were saying that he had a ceiling like what we've seen so far, but that it would take quite some time to get there. An SI.com writer raved about his statistical output, his "human highlight reel" quality, his gunslinger mentality — and the arm to go with it — and his knowledge of the game. At the same time, he said that he "does indeed face the steep learning curve" that occurs when evolving to the NFL from a system like Texas Tech. He also called his mechanics "scattershot" (h/t Andrew Martin on Medium).

Someone like that seems like a worthwhile gamble at the No. 10 pick, though not every analyst was on board. A USA Today writer called it a C-minus pick, saying that he's "nowhere near ready to play in the NFL" and that there was a chance he never would be. A Sporting News writer gave the Chiefs' overall 2017 draft class a C-minus, saying that the decision to trade up for Mahomes "set up a bad tone" for the rest of the draft, seeing as he didn't mesh with Alex Smith's mentality to ultimately learn from and succeed him.

And the fact that he was drafted 10th off the board, behind Mitchell Trubisky at No. 2, says just as much about NFL teams as it does about these scouts, analysts, and writers. Sometimes, we're just wrong. And given that Brady and Mahomes are two of the greatest quarterbacks ever — no, I really don't think it's too early to say that about Mahomes — there's more than a sufficient amount of evidence to show that the NFL Draft is, and will always be, somewhat of a crapshoot. 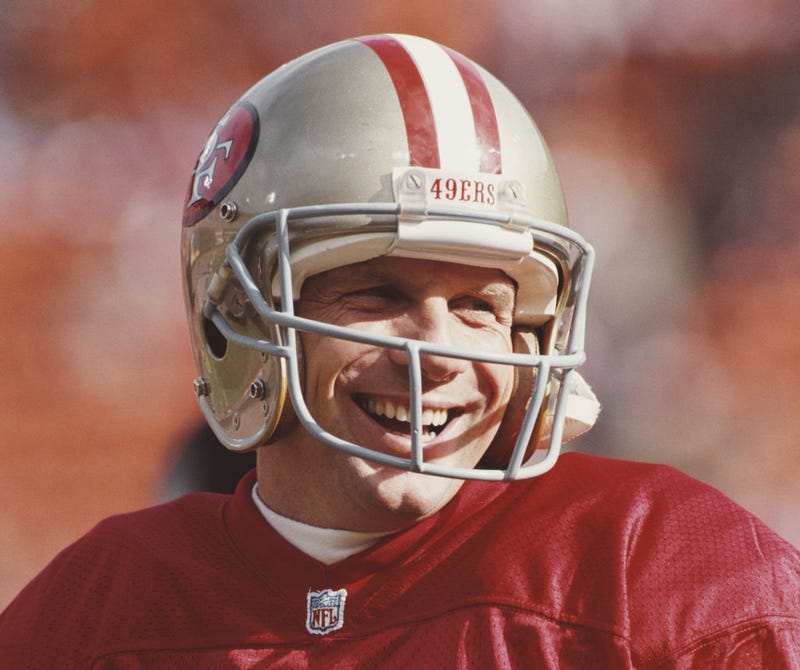 What did he do? Hall of Famer, 8x Pro Bowl, 4x Super Bowl champion, 3x All-Pro, 2x MVP. He admitted that Tom Brady was the GOAT quarterback, but the fact that we needed to run it by him to make sure that was okay is a testament to just how much of a legend Montana is. He may be falling down the various statistical lists in the record books because of how the game is evolving, but his accomplishments, hardware and bust in Canton speak for themselves.

But what were they saying before all of this? According to NBC Sports Bay Area, an anonymous scout wasn't speaking all too highly of Montana ahead of the 1979 NFL Draft.

“He can thread the needle, but usually goes with his primary receiver and forces the ball to him even when he’s in a crowd. He’s a gutty, gambling, cocky type. Doesn’t have great tools, but could eventually start.”

Yeah. Eventually, at some point, maybe he'll start. And to that scout's credit, Montana didn't start every game of a season until his third year, at which point he became a Pro Bowler, continued his hot streak into the postseason and won the first of his four rings. The best part about it is that he certainly did not force feed one receiver, hitting Dwight Clark (85 receptions for 1,105 yards), Freddie Solomon (59 receptions for 969 yards), Earl Cooper (51 receptions for 477 yards) and Charlie Young (37 receptions for 400 yards), among others, in a versatile offense. Of course, it became a little easier to force feed the ball to one guy when Jerry Rice stepped into the picture later on. 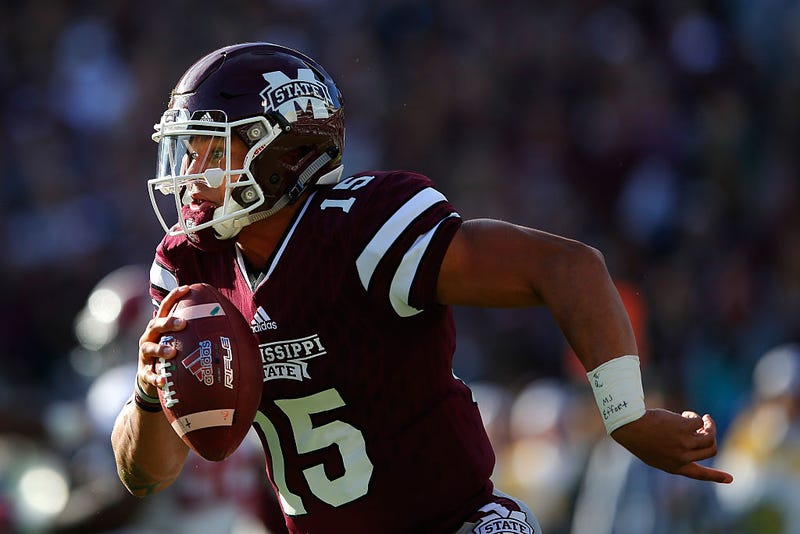 What has he done? 2x Pro Bowl. And it should have been a third in five seasons before a freak injury rendered him unable to play for the remainder of the 2020 campaign. Prior to that point, and though it was still early, he was on pace for a 6,760-yard season — yeah, that many yards — to go along with 36 touchdowns and 12 interceptions, and 12 more touchdowns on the ground. Who knows what the remainder of the year would have looked like, as that was a really high level of play to be able to sustain for 12 more games, but it's hard to argue that he looked great with a great receiving corps.

But what were they saying before all of this? That his pro player comparison was Tim Tebow. Well-respected and highly acclaimed draft analysts Rob Rang and Dane Brugler had a good mix of pros and cons for him, but most notable was the fact that they said Tim Tebow was who he compares to. CBS Sports did the best thing and shamelessly acknowledged that they had made this comparison, and kudos to them for doing that:

COMPARES TO: Tim Tebow, ex-Broncos, Jets, Patriots - It is the natural comparison, beyond just the connection to Mississippi State head coach Dan Mullen, who was Florida’s offensive coordinator when Tebow was in Gainesville. Although Prescott has a slightly better arm and more consistent mechanics, he and Tebow grade similar in several categories, including composure, mobility, power and leadership.

They weren't alone — he was marked as a sixth-round prospect by some — and obviously fell farther down the draft board than he probably should have. Again, the draft isn't easy, and guys like Prescott become the most valuable picks around when they far outplay what everyone expects. 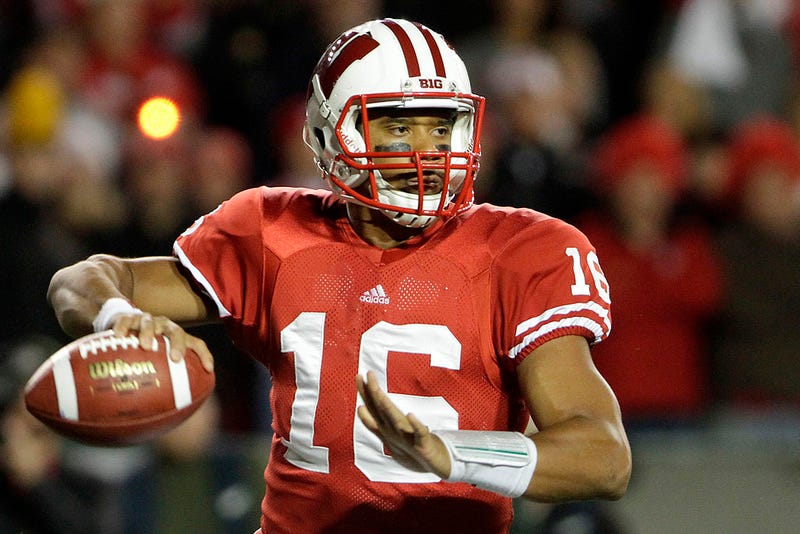 When was he drafted? 3rd round, 75th overall in 2012 NFL Draft by the Seattle Seahawks.

What has he done? 7x Pro Bowl, 1x Super Bowl champion. He has compiled one of the most impressive win-loss records (98-45-1) the game has ever seen, helping to usher in a new era of dual-threat quarterbacks with massive success. He recorded a career high in passing touchdowns in 2020, becoming the only player in league history with 40 passing touchdowns and 500 rushing yards in the same season. His future in Seattle is up in the air, but his future as a game-changing quarterback is still intact, and his future as a Hall of Famer is firmly in place.

But what were they saying before all of this? Some were high, and some were very, very low on the prospects of Wilson and the rest of Seattle's 2012 draft class. And Wilson didn't forget it.

Don’t let others lack of vision block your Destiny. #NFLDraft

To my road dawg..aka...the Best in the Game! @Bwagz !!! Happy Birthday Bro! Playing with you has been one of the coolest parts of my career! “Don’t get bored with consistency!” ✊🏾💪🏾🏈 #ClassOf2012 pic.twitter.com/f33gDQF8sc

The draft class probably deserved something like an A. Bruce Irvin wasn't the best first-round pick, but he was an effective linebacker throughout the 2010s. Bobby Wagner and Russell Wilson are two of the greatest players of this entire generation, though, so any other picks don't really matter. Snagging J.R. Sweezy in the seventh round also certainly didn't hurt.