A perfect training camp means one half of the roster wins 50% of the time, and the math is simple for the other half.

Thursday morning was a pretty good sampling of that. A day after backup quarterback Andy Dalton and Michael Thomas dominated red zone drills, the defense stepped forward and did the same.

Dalton's first pass in team drills was knocked away by CJ Gardner-Johnson. His second pass was intercepted by Bradley Roby, at least the 5th interception by the ball-hawking corner this camp. In all, Dalton's first four passes hit the ground before he completed a quick throw to RB Devine Ozigbo and then found Marquez Callaway in the end zone.

If you got to choose, you'd probably want the backup to struggle a bit against the first-team defense, so there's no major concern there. But it was a positive to see the defense respond with a solid day.

Ian Book had probably his best day, on the other hand. Five of his six passes in 7-on-7s went for touchdowns, though a pair of those took longer than you want to see in a drill without a pass rush. He's still holding the ball too long at times, but he does appear to be settling in. That's a positive heading into the preseason opener where he'll likely be seeing a big chunk of action.

Taylor's absence was the only relative surprise, though head coach Dennis Allen indicated the hip issue he's working through was not significant. Linebacker Zack Baun also did not participate in drills, but he was spotted working off to the side with trainers. The biggest bit of good news came in the form of Marshon Lattimore, who was spotted for the first time since he left the field with a hamstring issue last week. He got in limited work.

Thompson has already been waived with an injury designation, while LB D'Marco Jackson, S Smoke Monday, DB Dylan Mabin and OT Jerald Hawkins are on IR. Malcolm Brown was cut earlier in the week. 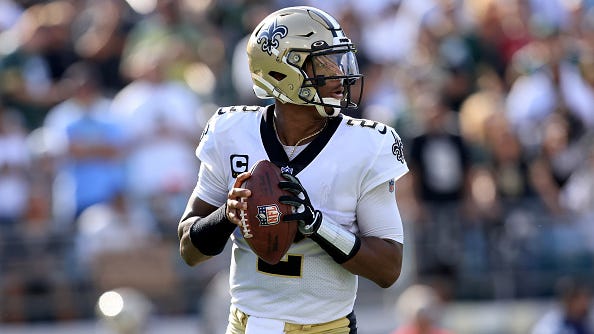 It's unclear when Winston will return from the foot issue that developed for him this week, but he won't be active for the preseason opener (and that might have been the case either way, if we're being honest). KJ Costello is wearing No. 19, and he'll also likely see action in Houston.

As the team readies for real, live football, the situational work has continued to get ramped up. Thursday was a lot of red zone and two-minute situations. Neither two-minute drill ended in a touchdown, though Book drove the team into what would've been reasonable field goal range. Dalton's drive stalled and ended in a Hail Mary attempt that was batted down at the goal line.

Each of Taysom Hill, Adam Trautman and Nick Vannett caught touchdowns in team drills, an impressive sign for a group that thinks it's capable of surprising people this season. Trautman's was a long catch and run to start 11-on-11s, while Vannett's was my play of the day as he adjusted to a backshoulder pass from Dalton in the back of the end zone, keeping his feet inbounds for the score. Hill got his touchdown from Ian Book as he made a quick cut up the seam for an easy score. The variety of talent and skillsets in that room offers some intriguing options, and it's good to see that group coming into its own a bit. Those three names will likely be the biggest contributors this season.

It's always hard to get a read on the positional makeup of Dwayne Washington, largely because of his work on special teams. He feels like a sure bet to make the roster despite averaging just over 6 carries per year each of the past three seasons. But he's coming into the year confident and says he's worked a lot more at RB this offseason. While it feels like the team will likely keep four running backs, if he stars in the preseason, might he make that 4th RB unnecessary? Unlikely, but it'll be something to watch. 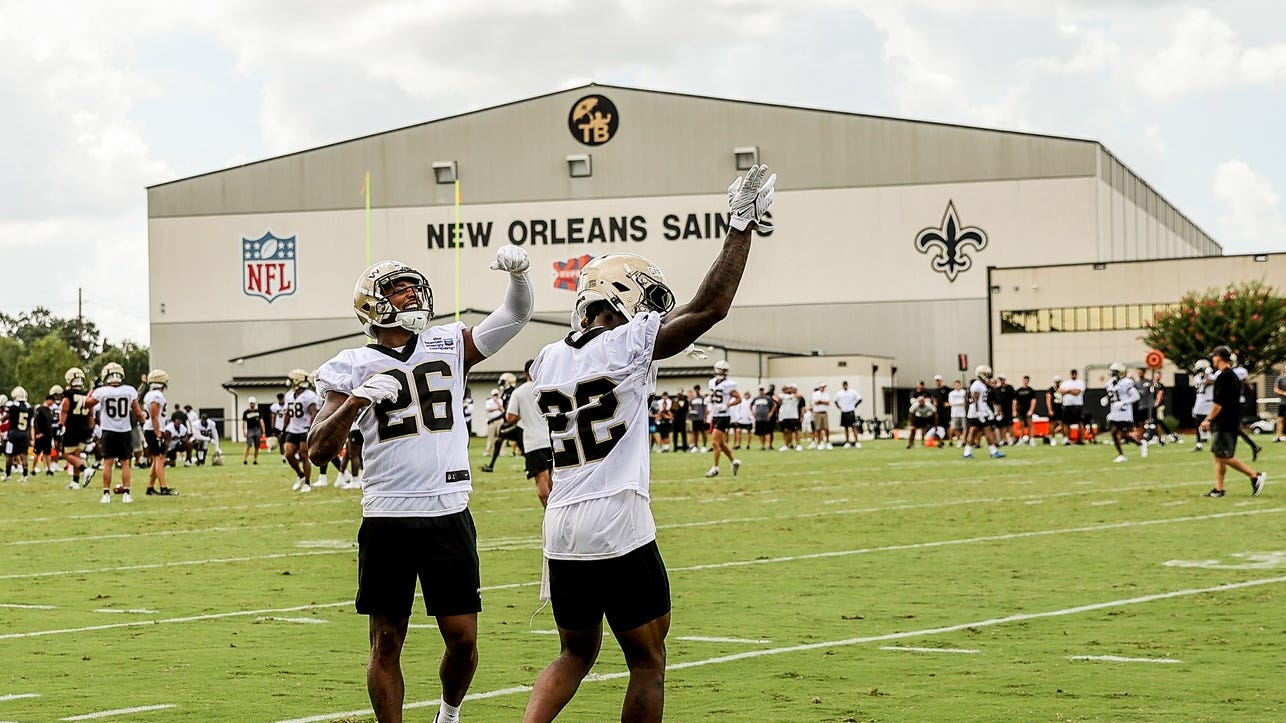 What are the Saints listening to at 2022 training camp? Here's a playlist

For anyone not watching practice, it'd have been fair to wonder why Mike Thomas' name didn't come up very often. Don't worry, it was pretty clear the defense was paying him a lot of attention after he blew up in team drills the previous day. One of the two targets he saw was into what looked like triple coverage. If all goes to plan, that could be what it looks like in games -- so that's a helpful thing to practice against. If nothing else, it's good to see the Saints have the ability to take a star away when they want to.

With the preseason kicking off for the Saints on Saturday, it'll be interesting to see how some of the down-the-roster connections translate to games. Book to Dai'Jean Dixon and Book to Kawaan Baker has been a common theme in my notebook since the start of camp. Keep an eye out for those in Houston, too.

Dalton is a wily veteran and knows a thing or two about messing around with the snap count. Carl Granderson and Payton Turner got victimized for offsides penalties on back-to-back snaps. Being on the alert for hard counts will be something they'll have to improve on for when the games get real.