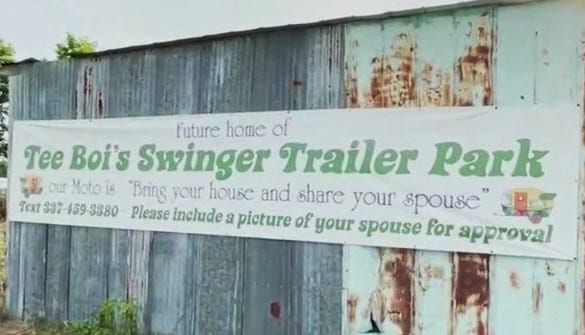 With a picture that’s rapidly going viral, a new business idea is quickly gaining attention in the small town of Mamou, La. And it’s all thanks to sign David Aucoin erected on a tract of land he owns.

Aucoin’s brainchild is Tee Boi’s Swinger Trailer Park, and he told KLFY-TV that, by simply putting up the sign, he’s gotten texts and calls from members of the swinger community from all over the country.

Aucoin said he’s also gotten a large number of incredulous calls and messages from people who don’t believe their eyes.

“I got on there and said, ‘I’d be a fat frog’s butt if it’s not a real number.’ Everybody starts calling, and they start calling, ‘Hey, what’s y’all’s address? Is this in Mamou? Where is this at?’ Yes, it is,” he said.

Aucoin does admit that part of the sign is less than truthful, but he said the part that reads, “Please include a picture of your spouse for approval” is meant to be an icebreaker of sorts.

“That was more of a joke to kind of ease up the people and just to create a vibe. People went further with it than you can imagine. We’ve gotten many pictures and many phone calls and many texts, voicemails. It’s unreal,” he said.

Aucoin is aiming for Memorial Day weekend of 2022 to open for business, and he plans for the premises to include a nude pool, a nude yoga stadium, a strip poker hall and a key party cabana. And while his vision does offer room for people to live at the trailer park, his design is for “party-themed weekends” where swingers can congregate in a campground atmosphere.