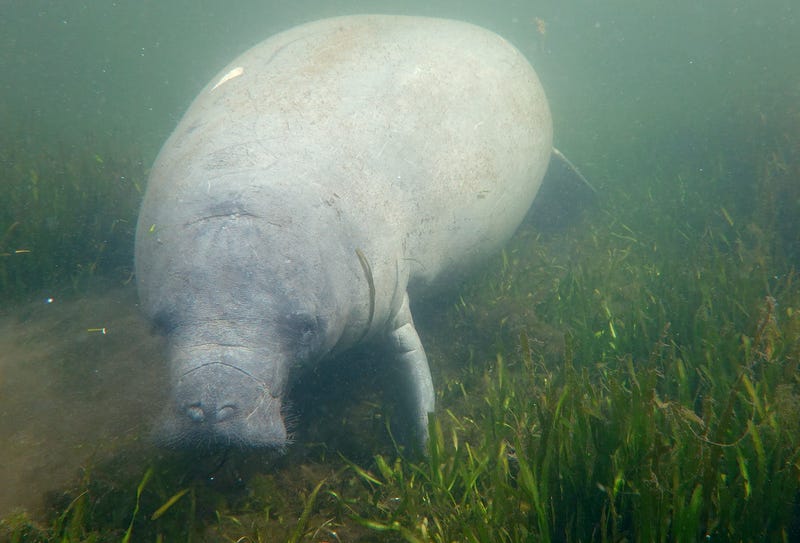 Manatees have been spotted in Louisiana waterways. According to a post on Facebook, a fisherman saw that manatee while on Lake Pontchartrain.

One of our viewers had a special guest pay him a visit while fishing in Lake Pontchartrain near Bayou Liberty yesterday!

That post was published on a page for a TV show hosted by WWL Outdoors host Don Dubuc, who provided more background about the manatee sighting.

"He was fishing at the mouth of Bayou Liberty where it empties into Lake Pontchartrain," Dubuc said. "A manatee wandered up on him, and he said it hung around there for quite a while. It was pretty friendly, and he got some really good pictures of it."

Dubuc says these manatee sightings are nothing new.

"This has been going on for years," Dubuc said, adding that manatees migrate to Lousiana waters during the summer time to enjoy the warm water and eat sea grass.

Dubuc notes that some of the manatees have favorite haunts to which they return.

"One year, we had one show up, and every afternoon for about a month, he showed up on the lakeshore of Mandeville Harbor, and he put on a really good show," Dubuc recalled.

Manatees are friendly creatures. They're also slow, swimming at a clip of about five miles per hour. That, Dubuc says, puts them in danger.

"They are in danger of getting hit by outboard motors," Dubuc said. "In fact, some of the older ones, you'll see propellar scars on their backs. You'll see signs posted around boat launches and places where they frequent telling you to be on the lookout for them."

If you see a manatee, call the Department of Wildlife and Fisheries so they can track the mammals. Dustin Garig is the designated point person for manatee sightings in Louisiana. You can call him at 337-735-8679. Garig says coordinates of where a manatee was seen, other specific information about a manatee's location, and photos--especially photos of scars on the backs of any manatees seen--are helpful to LDWF's efforts to track the animals.

"The reason for this: as temperatures begin to cool down, manatees need to return back to Florida in order to stay warm, and sometimes manatees get lost," Tiare Fridrich, manatee biologist with the Save the Manatee Club said. "Knowing if you've seen a manatee in your area can give local wildlife authorities a heads up that maybe a manatee is still around. Also, it helps with data collection in understanding where manatees are going and what they're doing."

"Always have a spotter on your boat, which is something you should do all times of the year," Fridrich said. "Not only do manatees use your waterways, but there are turtles and dolphins and lots of other species that could be in the channel."

Fridrich also suggested wearing polarized sunglasses to see manatees that might otherwise blend in with the water, boating slowly, and looking for "manatee footprints."

"When a manatee goes underwater after taking a breath, it leaves behind these large rings on the surface of the water called manatee footprints. If you keep an eye out for those, it's a pretty good sign that there's a manatee nearby."

How to tell a manatee is in distress – Live stranding vs. mating herd In the spring or summer time, manatees will get...

Posted by Save the Manatee Club on Thursday, September 22, 2022