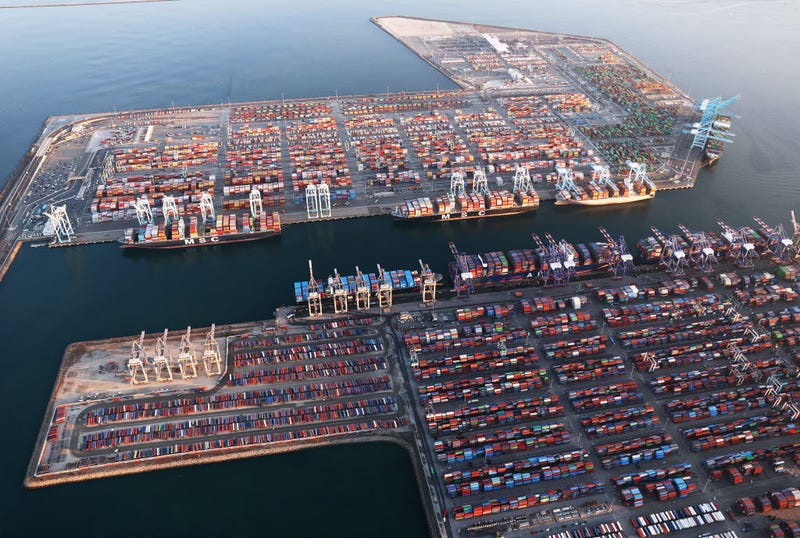 Mario Tama/Getty Images Photo credit LOS ANGELES, CALIFORNIA - SEPTEMBER 20: In an aerial view, shipping containers and container ships are seen at the Port of Los Angeles on September 20, 2021 near Los Angeles, California. Amid nationwide record-high demand for imported goods and supply chain issues, the twin ports of Los Angeles and Long Beach are currently seeing unprecedented congestion. On September 17, there were a record total of 147 ships, 95 of which were container ships, in the twin ports, which move about 40 percent of all cargo containers entering the U.S.
By Chris Miller

U.S. ports on the east and west coasts are clogged with overseas goods and there is no room for ships to dock. The Port of New Orleans is looking to take advantage, but it's not as easy as it sounds.

"We're seeing a surge of cargo that we really haven't experienced in the U.S.," said PortNOLA VP and Chief Commercial Officer Todd Rives.

According to Rives, Americans have been on a buying spree, causing an unprecedented surge in imports. But he also says if a port is full, freighters cannot just up and cruise somewhere else, so it is going to take some convincing. Rives said they are letting freight lines know that the Port of New Orleans has everything they are looking for.

"We have the cranes and we have the terminal capacity and lastly, we have access to six class-one railways," said Rives, "that can move cargo very expeditiously from New Orleans to Dallas to Memphis, and Chicago."

With the current backlog of port capacity expected to last through 2022, Rives says it is also a chance to convince freight lines to make New Orleans a permanent destination for their ships in the future.

"We're trying to tell them that Port New Orleans, if they have the vessels, we have the space, we have the labor, we have the rail connectivity to help them move their freight," he said.