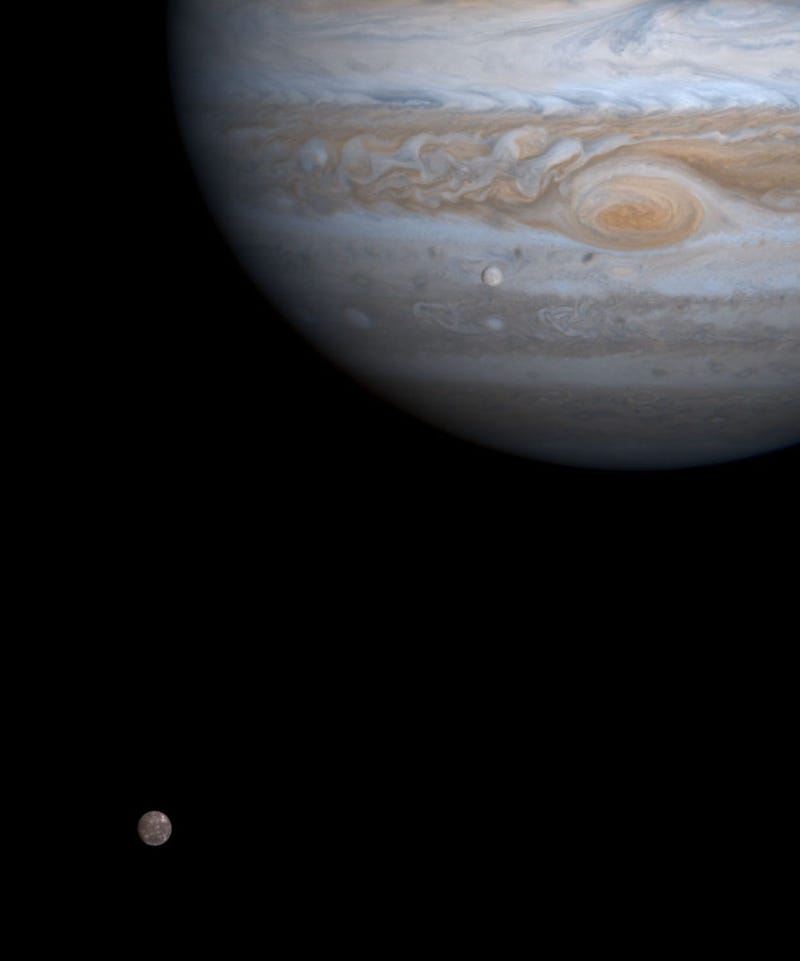 The solar system's largest moon, Ganymede, is captured here alongside the planet Jupiter in this picture taken by NASA's Cassini spacecraft, December 3, 2000. Ganymede is larger than the planets Mercury and Pluto and Saturn's largest moon, Titan. Both Ganymede and Titan have greater surface area than the entire Eurasian continent on our planet. Cassini was 26.5 million kilometers (16.5 million miles) from Ganymede when this image was taken. The smallest visible features are about 160 kilometers (about 100 miles) across. Photo credit Photo courtesy of NASA/Newsmakers
By Joe Hiti, Audacy

According to NASA astronomers, evidence of water vapor has been discovered in the atmosphere of Jupiter's moon Ganymede. The water vapor forms when ice from the moon's surface sublimates.

There's evidence of water vapor in the atmosphere of Jupiter's moon Ganymede, according to new findings using @NASAHubble data.

This water vapor forms when ice from the moon's surface sublimates — that is, turns from solid to gas: https://t.co/HHotDT9tKk pic.twitter.com/69HyY6cyQN

The discovery was made by scientists who used new and archival datasets from NASA's Hubble Space Telescope, Nature Astronomy published.

Ganymede is located half a billion miles away from Earth and was seen by the Hubble Space Telescope in 1996, with the first ultraviolet images being taken in 1998. Those images helped lead to the discovery of the water vapor. Galileo Galilei first discovered the moon in 1610. Jeff Bezos blasts into space on own rocket: 'Best day ever!'

Hubble followed changes on the moon and revealed other characteristics at both ultraviolet and near-infrared wavelengths.

Previous studies of the moon have now offered evidence that Ganymede, the largest moon in the solar system, contains more water than all of the Earth's oceans, NASA reported. Nevertheless, due to the temperatures on the surface of the moon, the water is frozen solid. So astronomers went through observations from the last two decades to find evidence of water vapor.