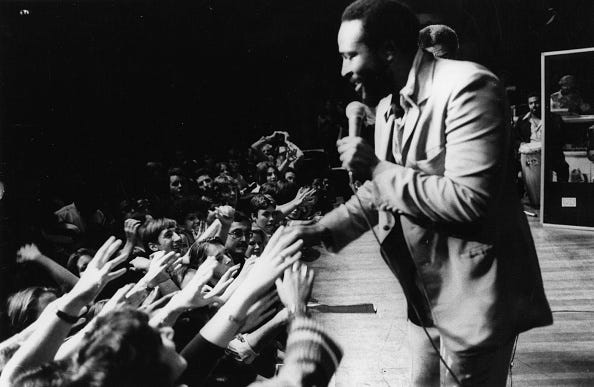 Legendary R&B singer/songwriter/activist Marvin Gaye was shot and killed by his own father on April 1, 1984. Marvin Gay, Sr. (that was the family name until Marvin, Jr. added a “e”).

I was doing the morning show on B-97-FM in New Orleans in 1984, and I recall sharing the tragic news of Gaye’s death with the audience. The story was unbelievable because Gaye was shot and killed by his father in the family home. The first reaction most people had focused on what would have happened that would make a father kill his son?

When I was preparing for my talk show today and I realized that today was the anniversary of that tragic crime, I decided to quench my curiosity and look further into the backstory of what led to that horrific moment.

B-97-FM was a pop/rock station; and for most of his career Mavin Gaye was known as one of the most popular R&B artists at Motown. But his career was revived in 1983 with the release of his hit, “Sexual Healing.” It was on our playlist at B-97 which made the news of Marvin Gaye’s death even more pertinent.

As I researched into what led to Marvin Gaye’s father shooting and killing his son I learned what is the truly sad story of the life of Marvin Gaye and the idea that he may have wanted his father to do something he could not bring himself to do.

Marvin Gaye’s father was a Christian minister who believed in the strictest discipline for his children and he was known to administer physical punishment. Marvin, Sr. was also a crossdresser at a time when such behavior was much less understood and acceptable than it is today. Marvin, Jr. was bullied at school because his father was a crossdresser and there were rumors that young Marvin was a homosexual. As Marvin, Jr. began to sense success in his music career, he added an “e” to his name to distance himself from his crossdressing father.

Marvin, Sr. did not approve of his son’s interest in pursuing a career in music. Iin addition to tension building because Marvin, Sr. was a harsh disciplinarian, Marvin, Jr. and his father developed a strained and tense relationship. Over the years there were only spikes of father/son comradery.

Marvin Gaye battled depression and paranoia and attempted suicide on at least three occasions. Marvin did not like touring; and during the tour to promote his new hit, “Sexual Healing” and his newest music, he turned to cocaine to help him deal with his life on the road.

The drug became a serious problem for Marvin. He became so paranoid that he was convinced that people wanted to kill him and even though there was no real threat, Marvin Gaye wore a bulletproof vest until the moment he went on stage.

When his tour was over in August of 1983, Marvin moved back into the family home to help his mother, Alberta, recover from kidney surgery. It was the home young Marvin had purchased for them in 1973. When Marvin, Sr. returned from a long trip, the conflict between him and his musically successful son grew.

For a six month period both men worked to keep their distance. At one point the conflict was so intense that Marvin, Sr. called the police to have his son removed from their home. Marvin, Sr. showed signs of being extremely jealous of his son’s success.

Marvin, Jr. left the family home and moved in with his sister. He grew remorseful and told his sister, “After all, I have just one father. I want to make peace with him.”

It was Christmas Day, 1983 when Marvin, Jr. gave his father a Smith & Wesson .38 special pistol to protect him from intruders.

According to family members and friends, Marvin, Jr. had become more suicidal and talked often about suicide and death. His behavior grew strange.
He would put on multiple overcoats and his shoes on the wrong feet.

Days before he was shot and killed by his father, Marvin, Jr. threw himself out of a sports car traveling at a high rate of speed in an effort to kill himself, but he only suffered minor injuries.

On April 1, 1984, Marvine Gaye and his father got into a physical altercation. Apparently, Marvin, Sr. had gotten into an argument with his wife; and Marvin, Jr. was attempting to settle the argument. When the fight broke out between Marvin, Sr. and Marvin, Jr., Alberta stepped in to try to calm her son down. As Alberta got involved and showed interest in calming her son down, Marvin, Sr. picked up the gun his son had given him that Christmas Day in 1983 and shot his son three times in the chest. Bullets hit Marvin, Jr.’s heart, lung, and liver.

He was pronounced dead on arrival at the Los Angeles hospital.

Marvin Gaye’s brother, Frankie, lived next door and immediately went to the family house and held Marvin in his arms as his life was slipping away. In a shocking revelation, Frankie wrote in his memoir the final thing Marvin Gaye said to him: “I got what I wanted...I couldn’t do it myself, so I made him do it.”

Iconic Motown superstar, Marvin Gaye, had failed at suicide attempts and seemed to be saying that he he wanted to die but could not kill himself.

The Los Angeles Herald-Examiner printed Marvin Gay, Sr.’s recollection of that day: “I didn’t mean to do that.”

Shortly after killing his son, Marvin, Sr. was diagnosed with a brain tumor that was benign. Judge Michael Pirosh concluded after two psychiatric evaluations and sentenced Marvin, Sr. was competent to stand trial. But the amount of drugs in Marvin, Jr. 's system and the physical injuries to his father were factors in the sentencing. Judge Gordon Ringer sentenced him to a six-year suspended sentence and five years of probation. At the sentencing, Marvin, Sr. told the court:

“If I could bring him back, I would. I was afraid of him. I thought I was going to get hurt. I didn’t know what was going to happen. I’m really sorry for everything that happened. I loved him. I wish he could step through this door right now. I’m paying the price now.”

Marvin Gaye’s father lived with the regret of killing his son for 14 years. He passed away in October of 1998.

I will never hear Marvin Gaye’s hits without thinking about this sad story of a father and son who both lived with regrets. I will think of both Marvin Gaye and Marvin Gay, Sr. when I hear “I Heard It Through The Grapevine,” “Mercy Mercy Me (The Ecology),” “Sexual Healing,” and the song with words that fit this anniversary of Marvin Gaye’s tragic death - “What’s Going On.”

There's too many of you crying

There's far too many of you dying

You know we've got to find a way

We don't need to escalate

You see, war is not the answer

For only love can conquer hate

You know we've got to find a way