NEW YORK (WCBS 880) – The Teton County coroner in Wyoming announced on Tuesday that Gabby Petito's cause of death was strangulation. The information comes about three weeks after her remains were found and nearly a month after her fiancé Brian Laundrie went missing, sparking an ongoing manhunt.

Dr. Brent Blue, of the Teton County Coroner's Office in Wyoming, had announced earlier Tuesday during a news conference that Petito's cause of death was strangulation — though Blue didn't over further details as to how.

But the Coroner's Office detailed in a written docket filed to the Teton County Clerk of District Court that Petito's official cause of death was “manual strangulation/throttling," according to CNN.

Steve Bertolino, Brian Laundrie’s attorney, issued a statement just after Gabby Petito's cause of death was announced -- and Petito's mother isn't having any of it.

“Gabby Petito’s death at such a young age is a tragedy. While Brian Laundrie is currently charged with the unauthorized use of a debit card belonging to Gabby, Brian is only considered a person of interest in relation to Gabby Petito’s demise,” said Bertolino.

“At this time Brian is still missing and when he is located, we will address the pending fraud charge against him,” he continued.

"His words are garbage. Keep talking."

Dog the Bounty Hunter weighed in on the coroner's determination of the cause of Gabby Petito's death, and what it means for the case.

In a statement to Fox News, Dog said, "The coroner’s statement has established a timeline that looks worse for Brian Laundrie. His continued evasion of law enforcement makes him look guilty. His best decision now would be to turn himself in," he said.

"I can’t fathom how Brian’s parents can live with themselves after how they’ve stonewalled the Petito family. They need to be doing more to signal Brian to stop running," Dog continued.

Dog, whose real name is Duane Chapman, took a pause from his search for Brian Laundrie after sustaining an injury.

3:15 p.m., Oct. 12: SCHMIDTS VISIT LI MEMORIAL DURING CORONER PRESSER
While a Wyoming coroner announced Gabby Petito’s cause of death, Gabby’s mother and stepfather were at a Long Island memorial for her.

Nichole Schmidt and Jim Schmidt just visited the memorial for #GabbyPetito here in Blue Point as the coroner gives an update out of Wyoming. @Newsday pic.twitter.com/s7bm969IVd

Nichole Schmidt and Jim Schmidt were seen at the colorful memorial for Petito in Blue Point, Suffolk County.

The Newsday video shows Jim rubbing Nichole’s back as they look on at the memorial.

"We find the cause and manner to be cause: death by strangulation, and manner: homicide," Blue said during a virtual news conference Tuesday.

Petito was not pregnant, Blue said, when asked by a reporter.

"All I can comment on that is that her body was outside in the wilderness for several weeks," Blue said.

"So it pretty much covered all the bases," he said.

But Blue declined to comment on many other details surrounding Petito's killing, citing an ongoing federal investigation. He said his office conducted a thorough analysis of Petito's death.

“Nothing is obvious in a situation like this. A detailed analysis was used to determine manner and cause of death,” Blue said. “I can’t go into details as to how we made those decisions.”

Teton County coroner Dr. Brent Blue will address Gabby Petito’s cause of death during a press conference from Wyoming on Tuesday afternoon.

Officials told Fox News that Blue “will be addressing the cause and manner of death.”

While Petito’s manner of death was ruled a homicide in the preliminary autopsy report announced last month, the 22-year-old’s cause of death has been pending, and it wasn’t previously clear if the cause of death would be revealed during the press conference at 2:30 p.m. ET.

It's still unclear exactly how much Blue will reveal with the FBI leading the investigation. The U.S. Attorney's Office in Wyoming told NewsNation reporter Brian Entin that "this is not our press conference and our office is not commenting on the case."

Petito’s remains were found Sept. 19 in the area of the Spread Creek Dispersed Campground at the Bridger-Teton National Forest.

A memorial to Gabby Petito in Florida was being removed by officials Tuesday morning but will be replaced by a permanent tribute.

GABBY MEMORIAL. One last look at the #GabbyPetito memorial in North Port before it comes down. The items will go to the family. A permanent memorial is in the works. (via Eric Hausmann) #JusticeForGabby pic.twitter.com/J2dWh0zXip

The memorial has been growing outside North Port City Hall over the past month, however the elements have taken a toll on it.

Staff members from the city were seen removing items from the memorial, including posters, candles, flowers and stuffed animals, and placing the items in boxes.

Petito’s family will look over the items and decide what they may want to keep, according to Fox News.

A permanent memorial that will include a steel bench crafted by a man from Indiana will eventually be put up at the site.

City staff is removing the #GabbyPetito memorial right now. A permanent one will be coming in the future. pic.twitter.com/bWgMjhXtzz

The coroner will hold a virtual press conference with reporters and is expected to take a few questions from the media.

While Petito’s manner of death was ruled a homicide in the preliminary autopsy report announced last month, the 22-year-old’s cause of death has been pending, and her body has remained with federal authorities.

According to Fox News, the final autopsy report will likely include both the time and cause of her death, though it’s unclear what will be released publicly.

Petito’s remains were found Sept. 19 in the area of the Spread Creek Dispersed Campground at the Bridger-Teton National Forest, just east of Grand Teton National Park.

Her fiancé, Brian Laundrie, 23, was last seen about a month ago on Sept. 13 in Florida. He is a person of interest in Petito’s death. A federal warrant has also been issued for his arrest in connection with a fraud-related charge. 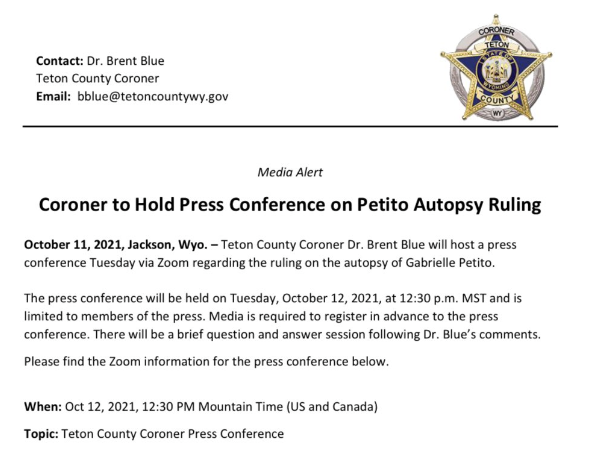 In a new interview, Duane Chapman, aka Dog the Bounty Hunter, speculated that Brian Laundrie may have called his parents from Wyoming around the time of Gabby Petito’s death.

Without providing any evidence, Chapman told The Sun, “Of course he murdered her.”

“I think he called the mom and dad right from the scene and said, ‘OMG!’” Chapman said.

Chapman also said, without evidence, that he believes Laundrie’s parents encouraged their son to return home to Florida.

The Laundrie’s attorney, Steven Bertolino, told The Sun that they would not be commenting on Chapman’s claims.

Laundrie ultimately arrived at the family’s North Port home on Sept. 1 in Petito’s van without her. He declined to speak with police before disappearing on Sept. 13, two days after Petito was reported missing by her parents in New York on Sept. 11. 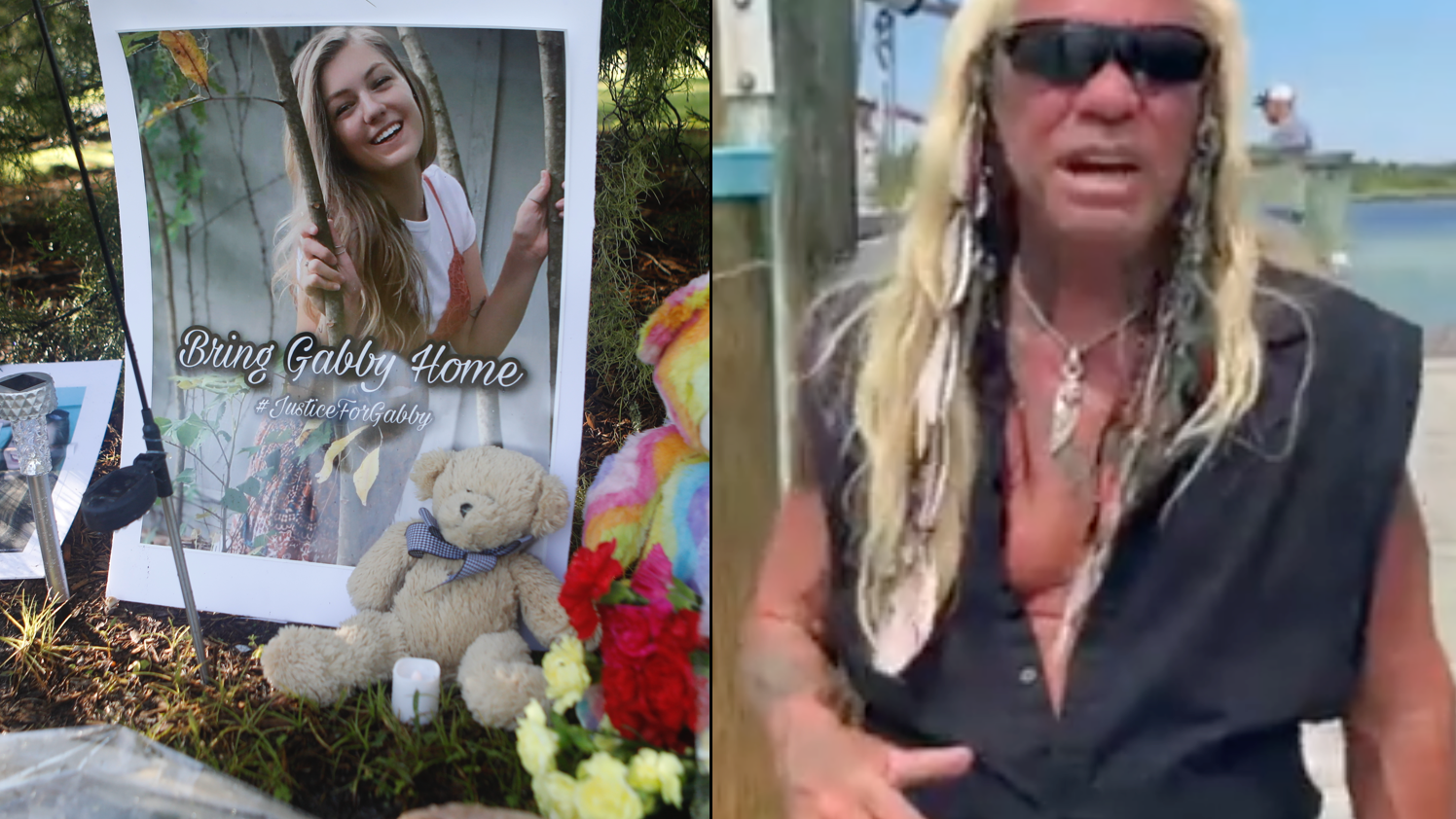