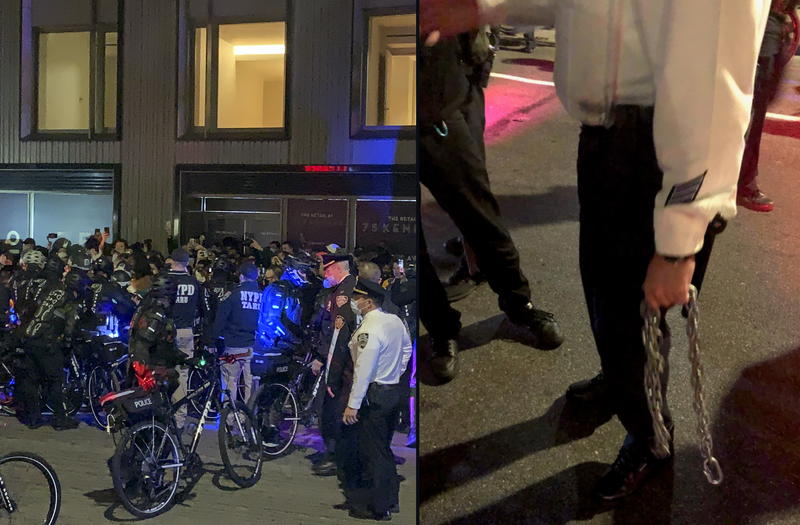 NEW YORK (1010 WINS) -- At least 18 people were arrested as police tangled with protesters for a second night in New York City. A 1010 WINS reporter was knocked to the ground as the NYPD tried to push protesters back and an officer had a chain pressed to his throat.

A peaceful rally that started at the LGBTQ landmark Stonewall Inn in Greenwich Village dispersed and another protest formed at Union Square, where the situation was heated.

It wasn’t immediately clear what led to arrests after the “We Choose Freedom” event, where people carried rainbow and Black Lives Matter flags while marching in the street. Extra police were drawn to the area amid uncertainty over the presidential election.

Thursday’s protests were less chaotic than Wednesday night, when trash fires were set and objects were thrown at police. Dozens were arrested.

But at Bond Street and Broadway, an NYPD officer was pushed to the ground by a man who pressed a chain against his throat, police said. The suspect was apprehended and faces charges of assault, criminal possession of a weapon and attempted strangulation.

Tonight, while performing their duties near Bond St & Broadway in Manhattan, an officer was pushed to the ground & had this chain pressed against his throat. The suspect was apprehended & will be charged with assault, criminal possession of a weapon & attempted strangulation. pic.twitter.com/QuWAosMAAP

The NYPD said a person with a knife was apprehended at E. 12th Street and Fourth Avenue.

“Bringing weapons like these to peaceful protests is unacceptable. It will not be tolerated and will result in an arrest,” the NYPD tweeted.

Tonight, officers were making a lawful arrest at E 12th St & 4th Ave in Manhattan when they recovered this knife from the individual.

Bringing weapons like these to peaceful protests is unacceptable. It will not be tolerated and will result in an arrest. pic.twitter.com/MrhTDwENYy

Officers at Thursday’s protest were seen shoving people, including 1010 WINS’ Roger Stern, who fell to the ground, and the city’s public advocate Jumaane Williams.

“NYPD knocks me to the ground as they use bicycles to push protesters further into Union Square Park after getting them off the street,” Stern tweeted.

Williams tweeted that police were aggressively trying to clear the street and appeared to be ready for mass arrests.

“We intervened to try and de-escalate and prevent that,” Williams tweeted.

“Our Public Advocate @JumaaneWilliams has a long history of going to protests specifically to join with New Yorkers while de-escalating tensions. There’s no sense in this, @NYCMayor. Where are you?” tweeted state Sen. Brad Hoylman.

Police Commissioner Dermot Shea has said officers have shown “an amazing amount of restraint'' in dealing with protesters this week.