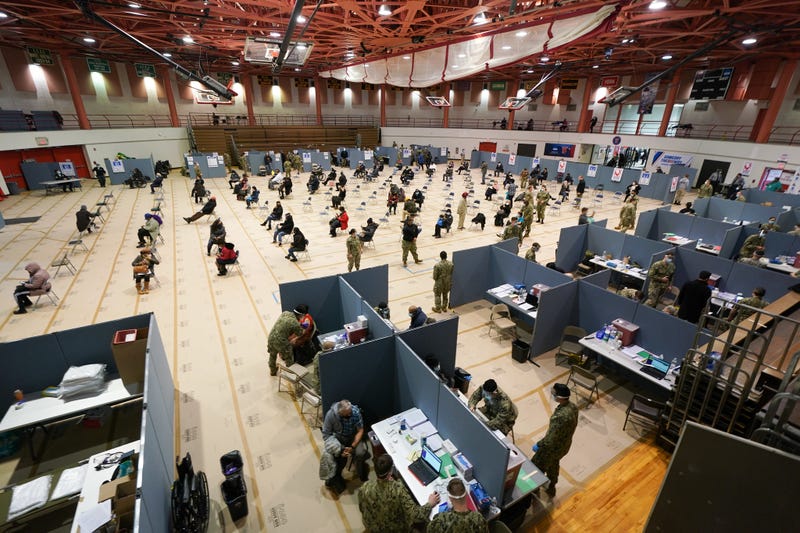 NEW YORK (1010 WINS) – New York’s coronavirus-related hospitalizations dropped to their lowest level since Dec. 12 as the state expanded eligibility at its two largest mass vaccination sites in Brooklyn and Queens on Saturday.

On Saturday, the state and FEMA–run sites at Medgar Evers College in Crown Heights and York College in Jamaica expanded eligibility to all residents of Brooklyn and Queens, respectively, who are currently eligible for the vaccine. Eligibility had previously been limited to residents of specific ZIP codes in the two boroughs.

The sites are open daily from 8 a.m. to 8 p.m. and have the ability to administer 3,000 doses of the vaccine every day.

The governor said the state’s health care distribution sites had administered 90% of first doses received and that 150,000 doses had been administered since Friday.

Appointments are OPEN at Medgar Evers College for all eligible New Yorkers who live in #Brooklyn.

Appointments are OPEN at York College for all eligible New Yorkers who live in #Queens.

Cuomo said hospitalizations in the state had continued to decline, dropping by 181 patients to 5,445. It’s the lowest level since Dec. 12, when there was a surge in COVID cases amid the holiday season.

The number of patients in intensive care also declined by 11 to 1,121, while the number of intubated patients fell by 18 to 753.

The state’s seven-day positivity rate also declined to 3.18%, the lowest since Nov. 26.

The state reported another 85 deaths, bringing its pandemic death toll to 38,407, according to state data.

Total COVID hospitalizations are at 5,445.

Sadly, there were 85 fatalities. pic.twitter.com/YWeK8D8lQY