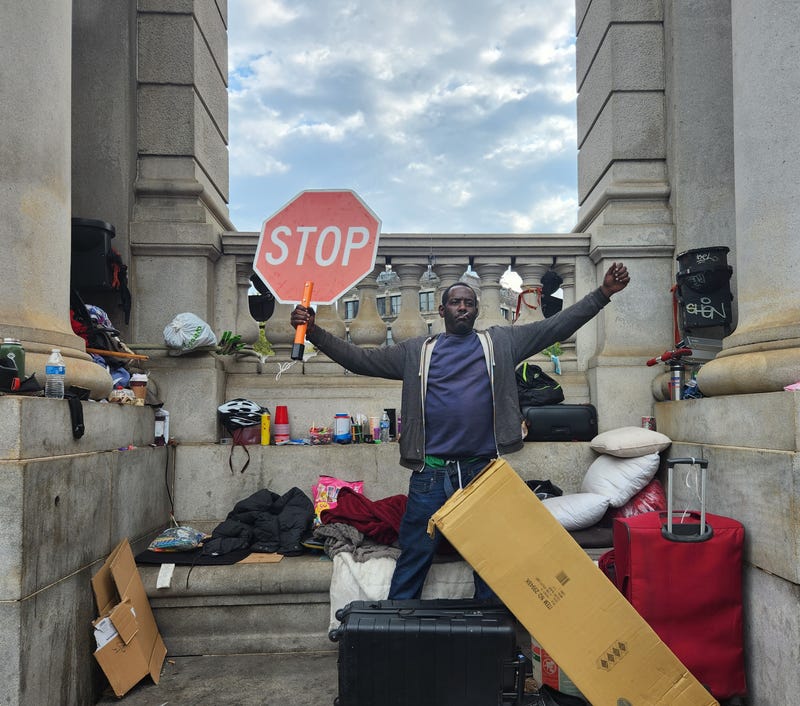 A homeless man defiantly raises a stop sign after police and sanitation workers force him to dismantle his makeshift tarp shelter at the base of the Manhattan bridge. Photo credit Curtis Brodner
By Curtis Brodner

NEW YORK (1010 WINS) — A team of NYPD officers, Department of Sanitation employees and Department of Homeless Services social workers dismantled a homeless encampment at the base of the Manhattan bridge in Chinatown on Thursday as part of Mayor Eric Adams’ sweep program.

The city has repeatedly targeted the encampment at the arch that marks the entrance to the Manhattan side of the bridge, and residents regularly rebuild the encampment, according to those living there. 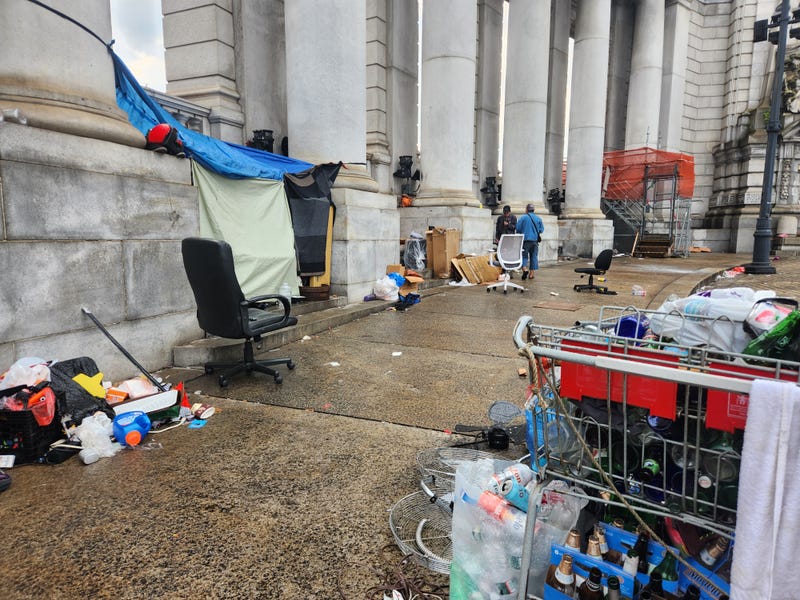 The homeless encampment as it stood before Thursday's sweep. Photo credit Curtis Brodner

Volunteers from the Rent Refusers Network, a mutual aid group that supports tenants and homeless New Yorkers, helped six residents pack up their belongings so they wouldn’t be thrown out during the sweep. 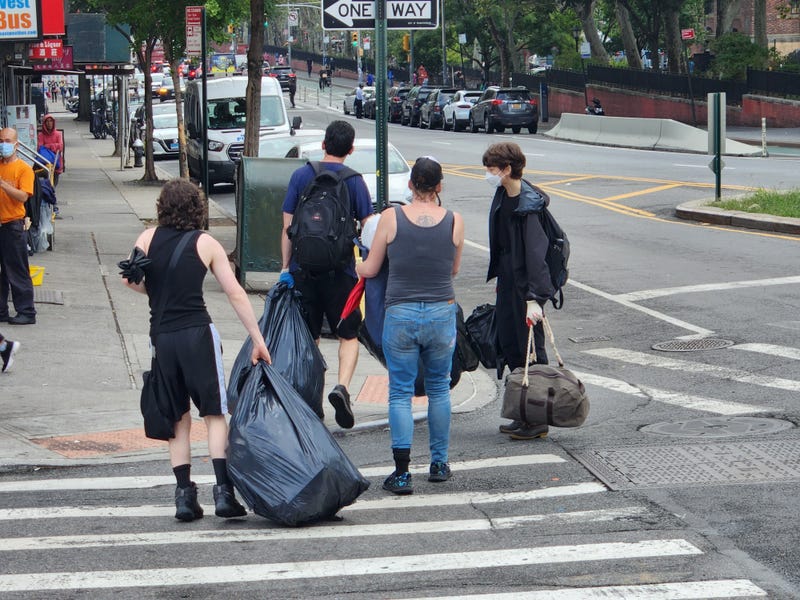 Volunteers help camp residents haul off belongings so they are not destroyed in the sweep. Photo credit Curtis Brodner

The sweep team allowed the residents to move most of their belongings, though one sanitation worker got in a shouting match with a resident over an item that the worker thought was trash but the resident wanted to keep. The city employee was pulled away by another sanitation worker after cursing out the homeless man. 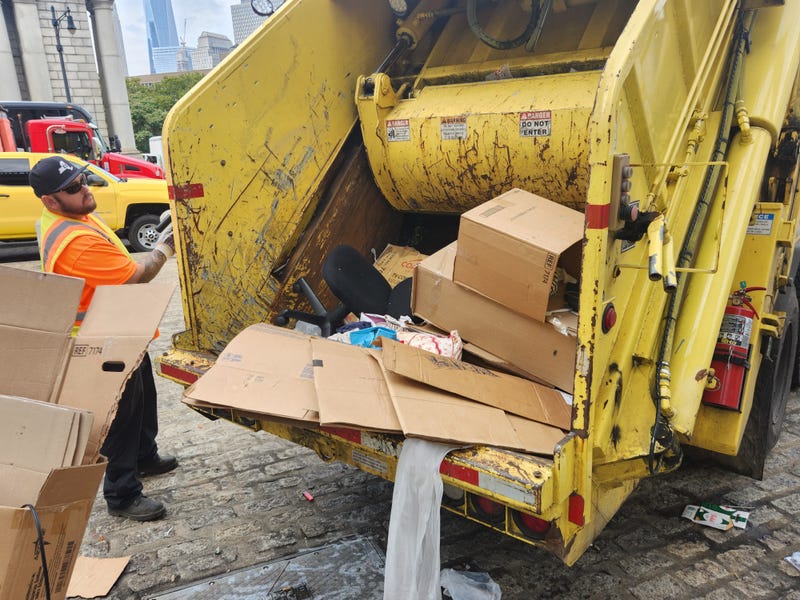 An office chair from the encampment sits alongside cardboard in a Department of Transportation garbage truck. Photo credit Curtis Brodner

Residents were warned of the coming sweep by a notice posted in English and Spanish, though some at the camp only speak Chinese, according to volunteers and neighbors. 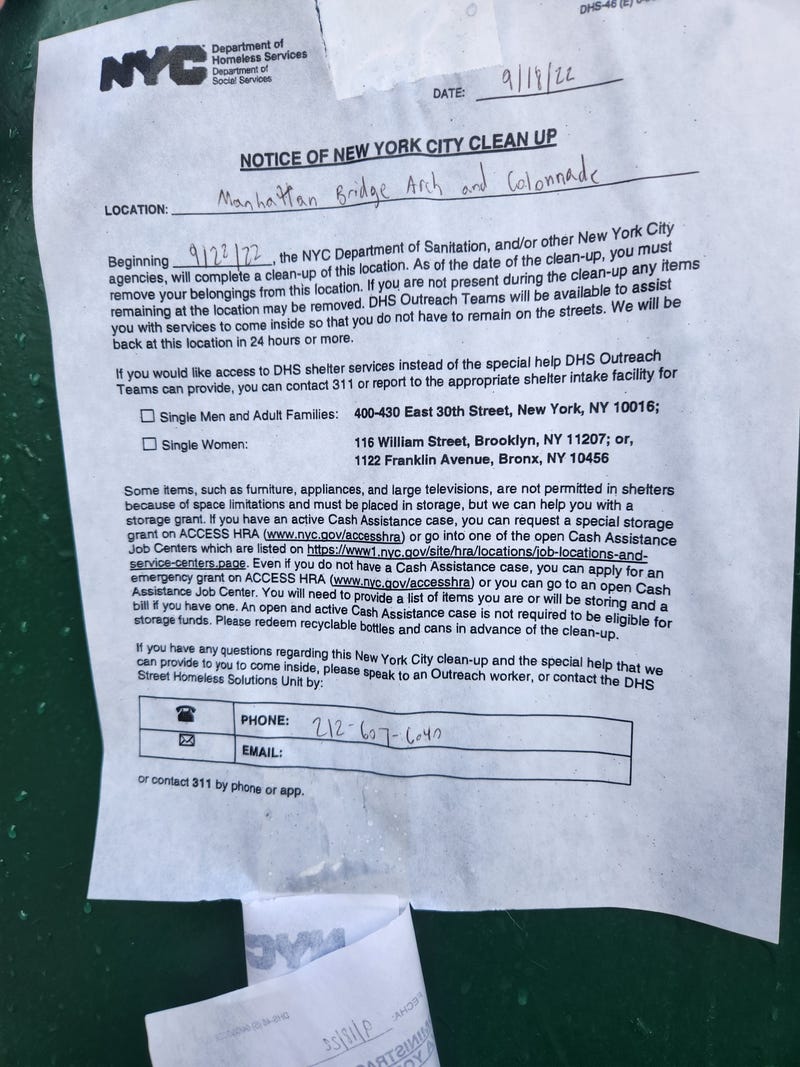 An English sweep notice posted on an electric box about 100 feet from the encampment. Photo credit Curtis Brodner

The city often distributes materials in Chinese in neighborhoods like Chinatown with large Chinese populations, but no such notice was available at the encampment on Thursday morning.

Thursday’s sweep, which started around 10 a.m., is part of Adams’ ongoing encampment clearance program that started on March 18. 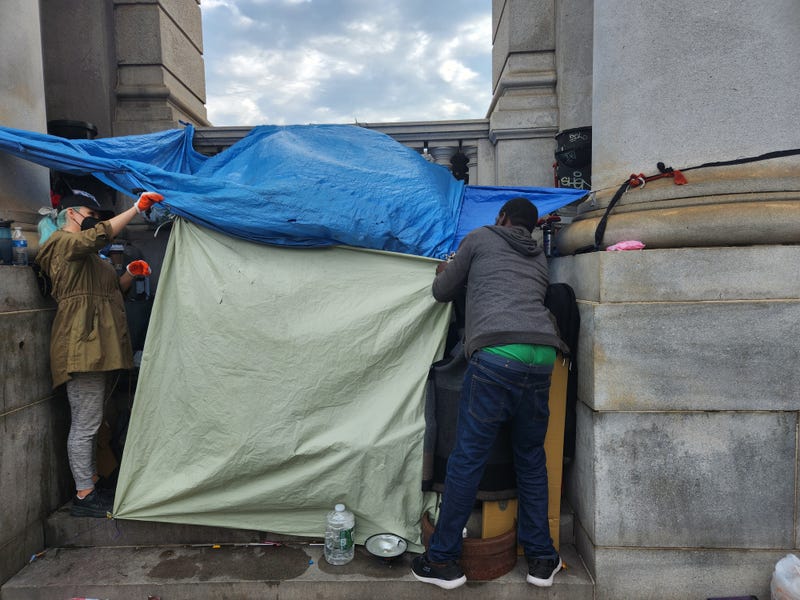 A homeless man works with a volunteer to dismantle the shelter he was living in as police and sanitation workers gather. Photo credit Curtis Brodner 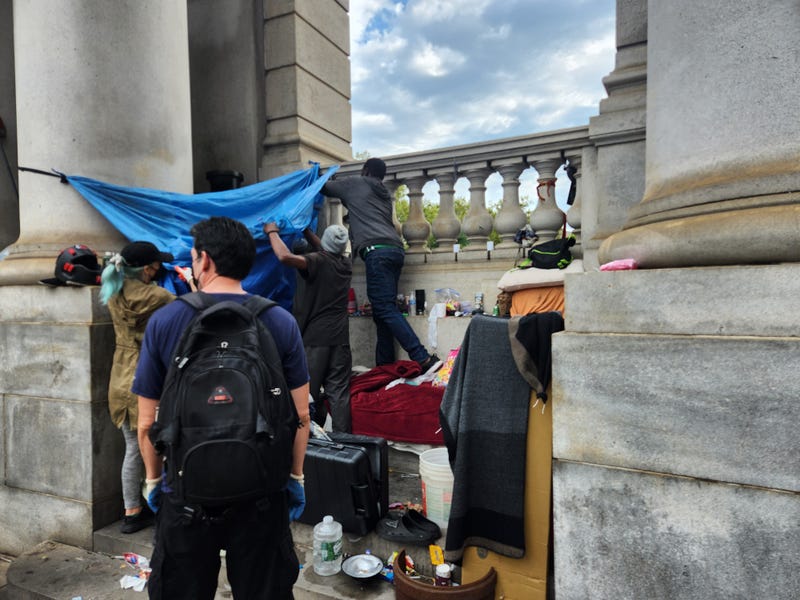 The Department of Homeless Services identified two primary goals for the sweeps — to “provide compassionate, resource-intensive outreach to help unsheltered people access social services such as temporary housing, financial assistance, or mental health and substance use assistance” and to “clear temporary physical structures… in public spaces not meant for human habitation.”

As of the end of August, only 97 homeless people had accepted placement in city shelters during more than 2,400 sweeps carried out since March, according to the City Hall.

Social workers clad in orange vests spoke to residents during Thursday’s sweep, but no one accepted services as they were being displaced by police and sanitation workers.

“For six months, outreach teams have engaged constantly with New Yorkers living on the streets to offer them a clean, safe place to rest and the dignity that comes with it," said a spokesperson for the mayor's office. "Every person accepting placement is a success story, and the facts show this administration’s approach is working. Mayor Adams has said since day one of this effort that building trust takes time and that we would engage with people as many times as necessary to get them help, and that’s exactly what the administration is doing.”

The program has provided services to .04 people per sweep over the course of about five-and-a-half months.

Sweeps can impact more than one person, but the city said only 1,442 people were contacted across 2,405 sweeps — indicating the same people were repeatedly encountered during the program.

In June, reporting from Gothamist found the sweep teams had hit the same encampments as many as 11 times less than three months into the program.

The Manhattan Bridge encampment has been swept weekly or bi-weekly for months now, according to residents.

Andrew, a man who sometimes stays at the camp and other times sleeps at a local YMCA, said the residents would probably set up camp again as soon as the police leave. 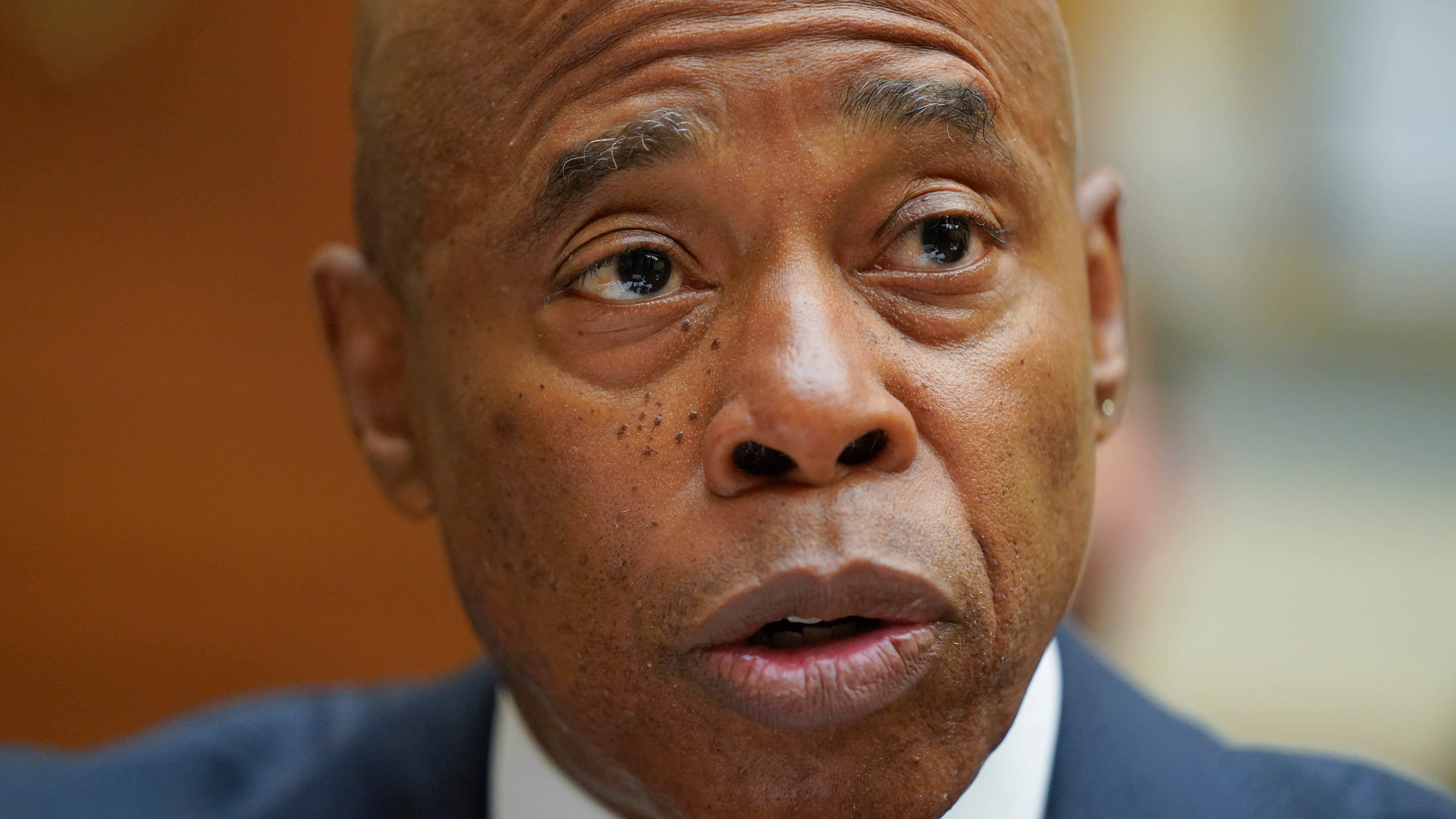 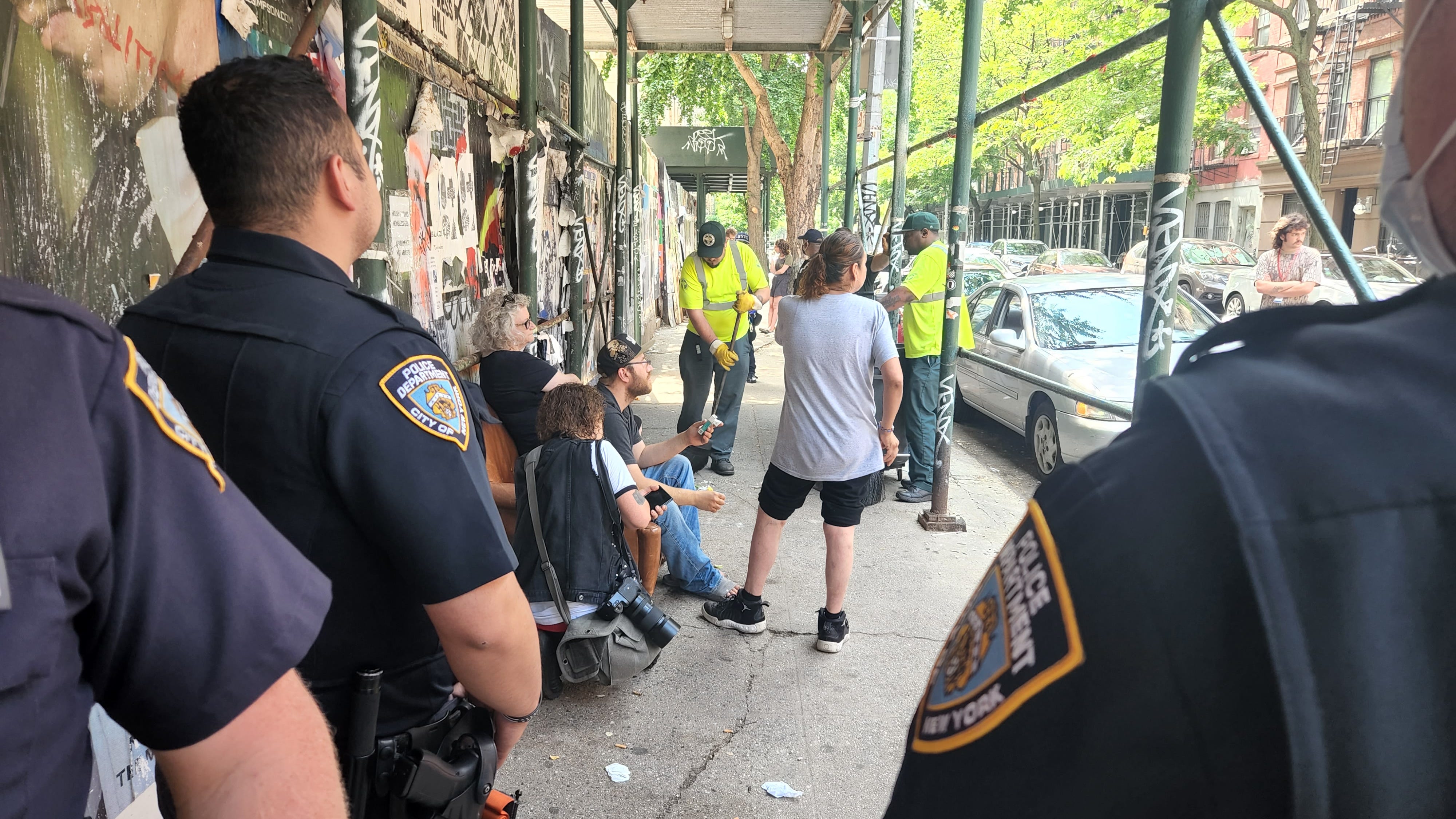