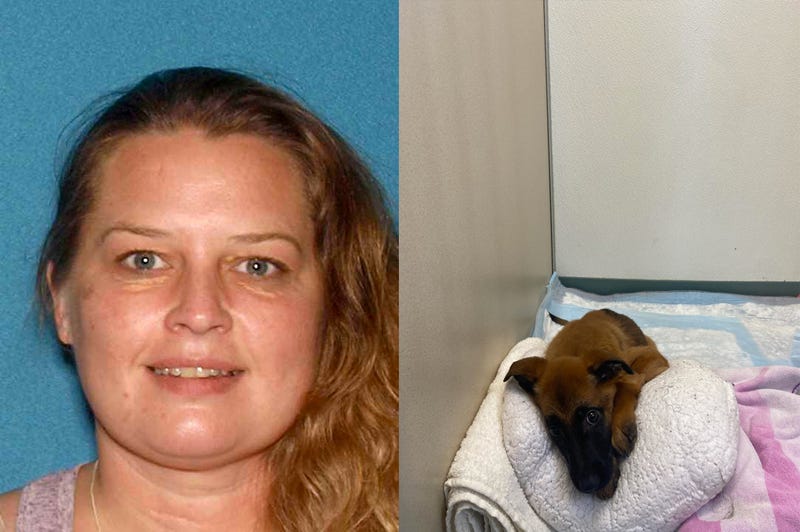 Jodi Wazniak and one of the German Shepherd / Belgian Malinois puppies that is currently being treated for the Parvo virus at the Linwoood Animal Hospital. Photo credit The Atlantic County Prosecutor’s Office
By Vincent Barone

GALLOWAY, N.J. (1010 WINS) — A New Jersey woman has been arrested and charged with animal cruelty for allegedly abandoning sick dogs, according to prosecutors.

Jodi Wozniak, 45, of Galloway Township, was arrested after an investigation into allegations that she was abandoning German Shepherd/Belgian Malinois who grew sick with a potentially fatal disease or otherwise needed medical treatment, the Atlantic County Prosecutor’s Office announced Saturday.

Investigators at the office received a tip on Sept. 16 that five adult dogs appeared to be abandoned in a wooded area near N. Pitney Road in Galloway. The dogs, owned by Wozniak, were left either tethered to a tree or in kennels with no food or water for about 15 hours, according to prosecutors.

Five days later, prosecutors believe Wozniak took five puppies of the same breed to the Linwood Animal Hospital with the potentially deadly, highly infectious Parvovirus. Three of the dogs were euthanized due to their illness, one was returned to Wozniak and a fifth remains in the hospital for treatment, according to prosecutors.

Authorities accuse Wozniak of using a stolen credit card to pay for some of the services rendered to the sick puppies that day.

Prosectors then found that the local police department in Absecon had reported that Wozniak had abandoned a dog after taking it to a different animal clinic on Aug. 28 for a price estimate to treat the pet’s digestive track issue without actually having the dog treated.

Wozniak faces several counts of animal cruelty, the fraudulent use of a credit card and counts of theft of services.