Only this time he isn't crawling around the city's subway stations alarming straphangers -- he's now playing a pivotal role in marriage proposals.

On Saturday afternoon at Tompkins Square Park in the East Village, Buddy -- who is really artist Jonothon Lyons in a rodent costume -- helped Mike Pesca, host of the Slate podcast The Gist, propose to his girlfriend Michelle Hunter.

The park is where Pesca and Hunter had their first date.

It's all true. When NYC fauna and true love come together its a beautiful thing. https://t.co/4VjrWOP4rh pic.twitter.com/C8IVShIgh2

While Hunter is seated at a bench, Pesca takes photos of Buddy scurrying around the park -- Hunter is unaware that there is a connection between her soon-to-be-fiance and Buddy.

Buddy then comes over with a box in his mouth. Pesca takes it, opens it, revealing a ring. 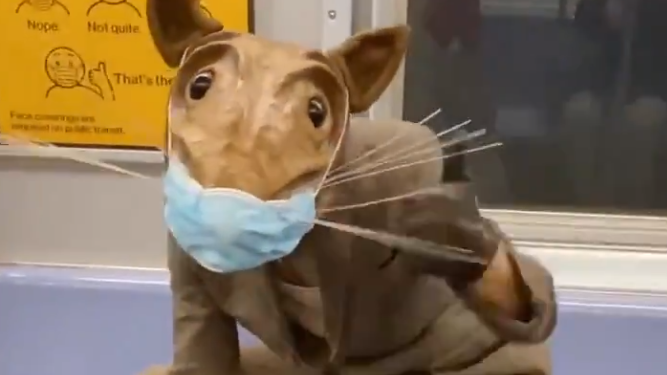 VIDEO: Buddy the Rat is back … dragging a slice of pizza on subway platform, wearing a mask on a train