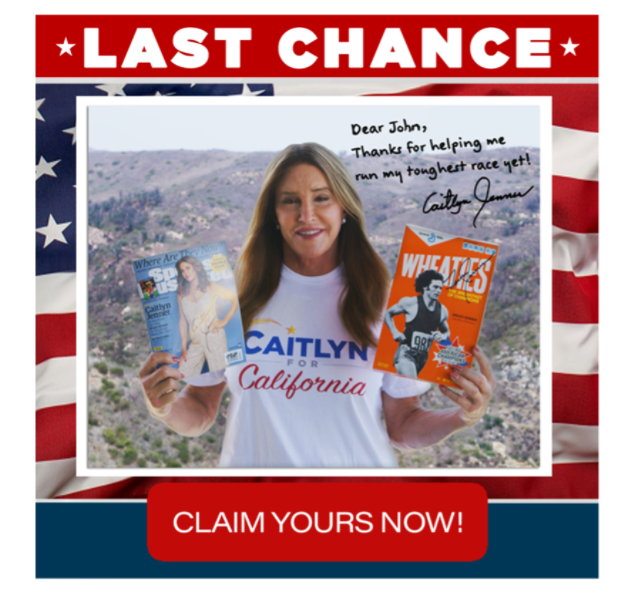 California gubernatorial candidate Caitlyn Jenner poses for a photo up for grabs to donors. In the photo, she holds her iconic box of Wheeties in one hand, and her newer Sports Illustrated cover issue in another hand. Photo credit Caitlyn Jenner
By David Caplan

Jenner, 71, is offering a keepsake to her supporters who donate at least $100 that speaks to two of her biggest claims to fame: her 1976 Olympics victory and her activism.

It's a photo of her holding, in one hand, a box of Wheaties from 1977 with an image on it of her running the decathlon. Then, in her other hand, she's holding a copy of Sports Illustrated from June 2016, on which she graces the cover. With that cover, Jenner became the first openly transgender person to be featured on the cover of the magazine.

"Thanks for helping me run my toughest race yet," Jenner, who shares daughters Kendall Jenner and Kylie Jenner with ex Kris Jenner, autographs the photo.

In the email's plea, Jenner writes, "There are only a limited number of signed photos available, and I want to give YOU a personalized one. This is your last chance, Friend. We’re running out quickly and soon there won’t be any left."