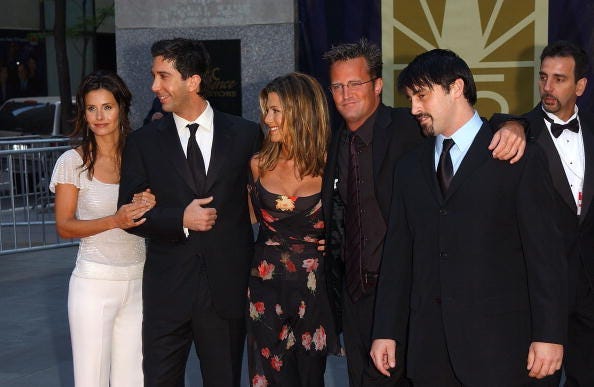 A new report says the "Friends" reunion special is back on at HBO Max. Supposedly, all six cast members are getting between $3 million and $4 million to participate.

FULL STORY: Earlier this week, MATTHEW PERRY Tweeted that there was "big news coming." Then yesterday, he joined Instagram. And if that's all he was talking about, I'd consider that quite the letdown.

But there's hope on the horizon. A new report says that the "Friends" reunion special on HBO Max IS happening . . . and all six main cast members are taking part.

And it would be foolish for them not to, because rumor has it they're getting $3 million to $4 million EACH. Whatever the exact number is, it comes out to around $20 million for the bunch.

That sounds like a lot for one special . . . but not necessarily in today's market. Netflix has been shelling out $20 million APIECE for specials by comedians like Dave Chappelle, Chris Rock, Ellen DeGeneres, and Amy Schumer.