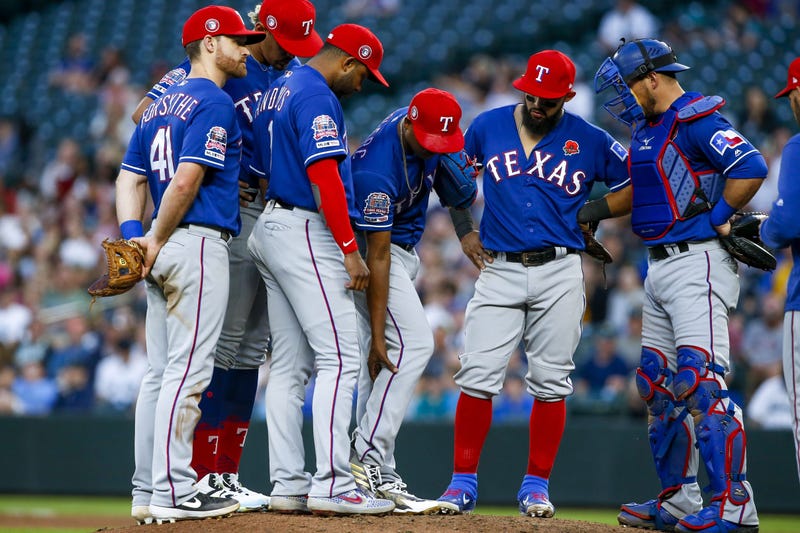 The other night during Rangers Xtra Innings which follows Rangers post game, Jared Sandler, Kevin Hageland and myself were discussing the potential strategy of the Texas baseball club when it comes to the trade deadline.

As always, pitching is essential, and I want you to say it with me now:

On K&C we have done the Anatomy of a Trade a number of times, and it’s well documented that one of the keys is to find the teams that are willing to trade because they are out of the hunt.

I identified this list as the current potential trade partners with the Rangers, but as we all know, things could change:

I still stand firm that the Rangers should simply ride with what they got and not stray too far from the plan, but if an opportunity presents itself to get a good deal, Jon Daniels should always listen. Don’t sell the farm to chase the dream this year.

Now with each team, let’s analyze the candidates:

Madison Bumgarner – 29 – He’d likely be a rental as he’ll be in free agency and it seems too much for a 1-year guy, unless the Rangers absolutely conclude that they are in it for this one year. You can dream about this, but if the plan is to be frugal for the future, this is out of reach.

Jeff Samardzija – 34 – A year and a half of control, but do you really love making a trade for a 34-year-old who is as up and down as he is? I’d be okay for a decent price, but I’m not going out of my way to trade for him.

Dereck Rodriguez – 27 – 4 years of control. He’s not having as good of a season as last year’s promise showed he could. The cool story is his dad is Pudge, but how much will that actually matter?

Jose Urena – 27- Costs about $3.2m with a couple of years of arbitration to follow. Great candidate with low strikeout numbers, but lots of potential. However, just went on the IL.

Sandy Alcantara – 23 – I’m told there is no way they are giving him up. He was traded from St. Louis in the Marcell Ozuna deal. 3.67 ERA with lots of potential.

Pablo Lopez  - 23 – Cheap $555k with 5 years of control, nice on strikeouts but nothing to write home about. Would be a nice addition to grow, but Rangers have pitchers like him.

Caleb Smith – 26 – Low cost with a nice 1.015 WHIP and high strikeout potential, currently on the IL.

Luis Castillo – 26 – Doesn’t cost much with a year of pre arbitration and 3 years more years. He’s having a fantastic year with a 2.26 ERA and 90 strikeouts with a 1.097 WHIP and low walks. This would be the epitome of controllable cheap pitching to build on for the future.

Sonny Gray – 29 – He’s having a good season so far and looks to be back to form. The man eats innings and has high strikeout numbers this year. After this season, three more years at $10.17m a year with a team option 4th year at just over $12m.

Tyler Mahle – 24 – Should have more strikeouts this year but low walks and is having a really good only costs $570k with one year of pre arbitration and three years of arbitration following, another young controllable pitcher.

Note- The Reds are one of my favorite potential trade partners here if the Rangers have a relationship and pieces they can work with.

Jordan Lyles – 28 – Free agent next year and has moved around a lot. Hasn’t cracked 100 strikeouts in a season but good numbers this year. Very good addition to somebody’s back end of the rotation if the Rangers were interested in adding depth there.

Max Scherzer – 34- Yes please! But I’ve heard our own Jared Sandler say this a number of times. “I don’t think the Rangers can win an arms race with other teams.” Meaning, all teams will jump at the chance to have Scherzer and many teams have deeper minor league systems to pull from.

Stephen Strasburg- 30 – Maybe not the toughest pitcher ever, owed $33m next season and his contract is setup until 2023 but it’s risky because he could opt out after 2020. The dude is a good pitcher, but his contract has too many risky things the Rangers don’t need to deal with.

Noah Syndergaard – 26 – The dude is making $6m with two years of arbitration. This is the perfect bundle of pitcher and contract for what the Rangers want. High strikeout numbers with moderate to low walks, throws hard and has a 3.19 career ERA. It’s gone up a touch, but can he be better? Can the Rangers be in position to make the payout for him? This is the best dream scenario if the Rangers are willing to break the prospects seal.

Jon Means – 26 – He’s having a decent first year with low ERA, but not a big number of strikeouts. However, the Orioles aren’t really in position to trade away controllable young pitching as they are kind of trying to always rebuild. The most likely candidate they will want to unload is Andrew Cashner….and we’ve been down that road.

Matthew Boyd – 28 – He costs $2.6m with three years of arbitration, and it sounds like it’s going to cost to get him. From somebody with the finger on the pulse in Detroit’s organization, the Tiger’s won’t likely let him go. He’s found a groove with his strikeouts and has grown a lot in Detroit since 2017.

Spencer Turnbull – 26 – He’s having a good year with a 3.01 ERA in 13 starts with low strikeout numbers and low HR’s given up. He’s not likely going to move because both are potential building blocks.

Marcus Stroman – 28 – You would have him for one and a half years as he’s an agent after next year. He’s cheap at $6.3m and it could be about the same next year in arbitration. When he’s good he’s pretty good and he hasn’t ever been really bad. Lots of potential 3.31 ERA 63 K’s and two years with 160-plus strikeouts and 200-plus innings. I’d be a fan of this move.

Lucas Giolito – 24 – Tons of walks. This year he is cruising with a 2.25 ERA 89 strikeouts and a beautiful .920 WHIP. He was pretty awful last yea, but he’s on fire right now and with 4 more years of control. However, the way he is pitching there is no way the White Sox are trading him…right?