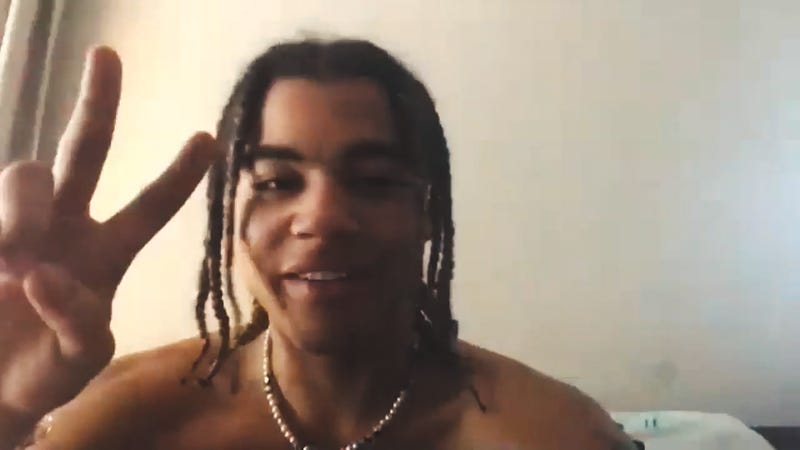 He just hit a milestone birthday, but not one you fret about as you get older, one where the Earth moves for you! Golden Landis Von Jones, 24kGoldn, just turned 20 years old and got to celebrate with half a billion streams of his genre crossing hit, “Mood.”

This kid can cook.

He grew up in the bay area as a kid doing capoeira and dabbling with the clarinet, but in the early 2000’s Golden didn’t just hear the music in his surroundings, his horizons grew bigger into the world of pop-punk and it inspired extra parts of his musical brain to grow. He mentions Sum 41, Cheaper by the Dozen, songs on Lego Rock Band.

Before finding a massive breakout on Dropping Outta College, a debut EP, he first had to go to college. Golden earned his way into a full ride scholarship to study business at USC. He knows how to spot an opportunity and wants to put his own sense of hustle into capitalizing on that gift.

You know this kid is talented when he talks about how “Mood” came together over a video game while he was hanging out in quarantine:

“It came about as an accident to be honest with you”, says Golden. “Me and Ian Diorr - the feature artist on the song - we were at his apartment, quarantine had just started, Omer (Fedi) was there, KbeaZy was there - Me and Iann were playing Call of Duty… Omer starts playing this guitar riff and I hear *sings ‘Mood’ intro* and I’m like whoa and i just start singing without even really realizing it while I’m playing this Call of Duty game and ‘Mood’ comes out *mumble/sings ‘Mood.’* Omer’s like ‘STOP STOP STOP. That’s hot! Come lay that down.’”

Golden is a social media master, a shoe collector, and hustler from the Bay Area that understands nothing is guaranteed dropping a quip as old as time, “the bigger they are the harder they fall.”